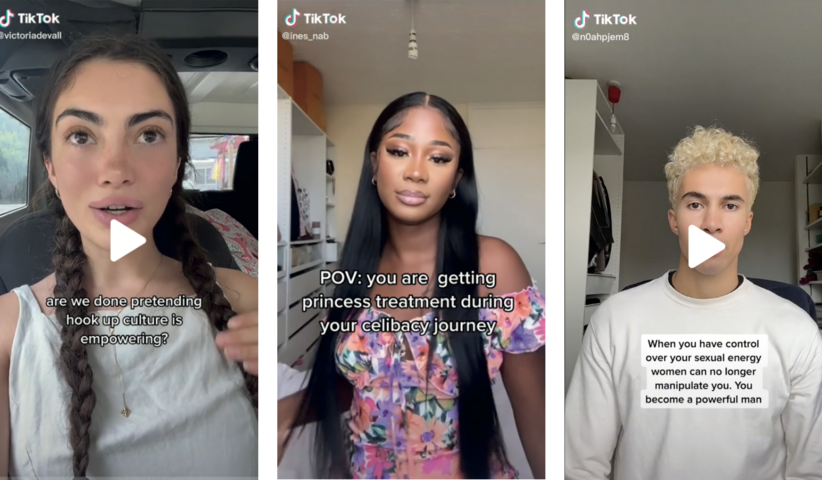 On the social media platform TikTok, #celibacy has become a global trend. Why are more and more young people voluntarily abstaining from sex?

No matter where you live, what your job is, how old you are, you can’t escape it: recession is back, back, back again. Between the war in Ukraine and the acceleration of climate change, the post-COVID era brought us nothing but responsibilities, restraint and fear.

And while the news cycle focuses on oil and gas prices, Gen Z is going through a very real existential cultural shift, as the current crisis reaches the most intimate areas of their lives, with celibacy emerging as a significant cultural trend - at least on TikTok. Done with the abundance, the time has come for abstinence!

“Generation Z is often called the most anxious generation ever. But what scares them so much?”

Born between the end of the 1990s and 2010, most Gen Zers have already made it through two economic crises, a pandemic and several nuclear war threats before even graduating college - and if we’re to believe our politicians, the worst is yet to come.

It’s no wonder that they are often called “the most anxious generation to date”. But what’s making them so stressed?

Well, for starters, they are bombarded with bad news, all day every day. The world is decaying from all sides, and they are very much aware of it.

“This lifestyle, which one would normally associate with incels and religious fanatics, seems to have gained popularity on TikTok”

The current recession is afflicting youngsters more than any other age group, keeping them in the familial home even later than millennials, delaying the start of their careers and thus, their financial independence. You’d think twice too before bringing someone home after a party, if they’d have to meet your parents at breakfast.

According to a study published in 2021, young single adults are drinking less, staying inside more, connecting with friends via social media and gaming platforms. Add on top of that a fear of STIs revived by COVID and monkeypox, and you’ve got yourself an environment that isn’t really conducive to a lot of casual sex.

Celibacy isn’t just a product of the crisis, of course. The lifestyle one would usually associate with incels, religious fanatics and the Jonas brothers seems to have gained popularity on TikTok, the one-billion-user platform where youngsters not only interact with each other, but also seek advice, help and information from their peers or self-proclaimed educators (some questionable, unfortunately).

“What is sexual freedom worth if in the process a patriarchal status quo is maintained?”

Abstinence is currently one of the trending topics, mostly among young women dating men, and seems to have found its relevance in opposition to the hookup culture that has dominated Western societies the past decades.

At this point, you might think: “earlier generations fought for sexual freedom, shouldn’t these kids be more grateful?”, to which Gen Z might retort: “what’s sexual freedom worth, if it’s maintaining a patriarchal status quo?”

Or as TikToker, podcaster and holistic coach Victoria de Vall puts it : “Are we done pretending hook-up culture is empowering”?

“Opting out of sex or dating becomes not only a personal choice, it’s an activist practice”

In the video, which garnered over 230000 views, the psychology graduate doubles down: “even when you think you’re equally using one another - do you think that shit is empowering or healthy? (...) Let’s stop using anybody, that’s just a response to your own oppression (...). It’s not healthy, it’s not liberating, it’s not a vibe”.

When you really think about it, what do we get out of casual sex? Sure, we always hope for it to be fun and pleasurable, but let’s be real - more often than not, it’s a disappointment. Not to mention, many people feel emotionally or spiritually involved with sexual acts, so for them, casual sex can even become a self-destructive practice.

The “men are pigs” narrative isn’t new, but in this day and age, when “toxic masculinity” is a concept widely known amongst teenagers, it hits different: more than bashing and dividing, it’s about deconstructing and rebuilding. Opting out of sex or dating becomes not only a personal choice, it’s an activist practice.

When the US Supreme Court voted to overturn Roe vs Wade last June, young women took to TikTok to express their despair, some of them vowing to withhold sex in protest of the abortion ban. Among them, user iseaabel, 22, states “I’m in my celibacy era. Y’all think I’m gonna risk getting pregnant (...) by a man who can’t even make me finish?” Gen Z feminism sees abstinence as a way for women to reclaim their body, in a society that keeps reinforcing sexist power dynamics and still cuts men way too much slack. Fighting the patriarchy, one night in at a time.

Tiktok user allroundgreatgal, who also calls herself Lanadelredneck (genius), sums up the movement in this improvised manifesto: “all the girls are going on celibacy strike and starving men of sexual gratification until they can act right”. Her message has been played 200,000 times and counting, and she’s published many other videos questioning gender roles, patriarchal values, and calling on women to find their true value without the burden of pleasing, reassuring and healing men.

The idea of celibacy has been embraced by conservative communities forever, so what’s different about this trend? It’s simple: Tiktok-era celibacy encourages women to save themselves for… well, themselves. Not their future husband, not out of respect for their beliefs or out of fear of disappointing their parents.

“I feel like I really needed this, because I was in a relationship too long, when I was really young, and I didn’t get to know who I was” says Lee, a vocal beautista with 2 million followers. She’s been celibate for over a year and a half, and her journey brought her to question whether she actually loved her ex-partner: “I think I just liked the attention”.

Freeing themselves of external validation, the adepts of celibacy allow themselves to fully focus on finding out who they really are. “Plus, my pH balance is doing great down there” adds Lee as she’s finishing up her make up. No cap, as Gen Zers like to say.

But gaining self-awareness and confidence aren’t the only perks of celibacy: many TikTok creators mention their journey has led them to set higher standards for the men they plan to date in the future, in the hopes of developing healthier, more sustainable relationships.

Upon request of one of her 137,000 followers, Tiktoker and fitness influencer Jordie Danielle published a video update of her abstinence journey, mentioning that “the best part about it is (...) that it eliminates any guy who’s just looking for sex”. Being abstinent while dating will give you clarity on the emotional connections you’re trying to build.

How do straight men respond to this?  In a #storytime, Gabrielle Victor, who’s a young single mom and influencer, tells us (and about 1 million more people) how the guy she’s about to go on a first date with announced her that he was celibate, too.

“He sent me a voice memo (...) and said - you need to be more worried about the snacks we’re having during a movie than any of this nonsense, because I’m not worried about it - so now I feel really comfortable and excited”! If some men seem to have adopted the trend as well, their manifestation on Tiktok seems to be often rooted in misogynist ideas.

“If anything, people practicing abstinence should be commended for living their romantic lives with more intention”

After decades of being taught we should have as much sex as possible, with as many people as possible, it might seem like a weird U-turn for Gen Z to explore the ‘less is more’ philosophy, but it just makes sense.

Generations aren’t “just a marketing concept”: they are also culturally relevant, and it’s not uncommon to observe great shifts in mentalities and behaviors such as this one once a generation comes of age.

If anything, people practicing abstinence should be commended for living their romantic lives with more intention.

Gen Zers aren’t the brainless, porn-addicted, socially awkward teens that are often painted by the media exploiting the statistics of “the sexless generation”: they’re just politely declining the diktat of quantity, and consciously choosing quality.

Everyone thinks they are enlightened. Yet death and sex are still as hidden as they were in Victorian England.

What couldn’t you do without?

What do you need in life? From Canada to South Africa to Pakistan, people around the globe explain what they can’t live without. Here Fatma Aydemir and T. C. Boyle say what is indispensable.

“We need a culture of less”

For half a century, activist and author Vandana Shiva has been criticising the excesses of the global economy and arguing for a simple life. A conversation about false abundance and the necessity of downsizing.

The end of excess

Looking into the pages of our new magazine.