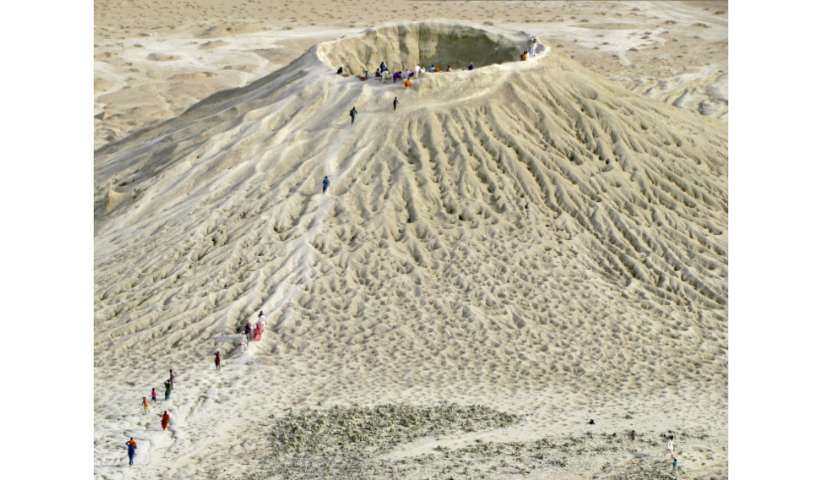 The mud volcano in Pakistan's Hingol National Park is considered sacred by many Hindus.

The mud hill cuts into the sky like a pyramid, with liquid grey-brown earth bubbling away at its very core. The Chandragup is an active mud volcano that lies in the Hingol-National park in the Pakistani province of Belutschistan, some 200 kilometres west of the port Karatschi. Methane regularly leaks from the slurry crater lake of the around 100m tall volcano. The lack of flora and fauna makes it look like a lunar landscape - hence the name Chandragup or “Moonwell.”

For Hindus, the hill in the desert is considered sacred and is associated with the God Shiva. That’s why many believers plan a pitstop visit here on the way to the shrine of the Shri-Hinglaj-Mata Temple, which also lies in the national park. It’s most packed in the Spring, when the place lures thousands of pilgrims. During the Hinglaj Mata, the most important Hindu pilgrimage in Pakistan, people stop at the site to clamber up the volcano, sometimes in scorching heat. Those who reach the summit pray that their wishes be fulfilled. Gifts such as rice, flower wreaths and coconuts are thrown into the crater. Coconuts dipped in the craters’ mud are considered holy, which is why people from the area sometimes fish them back out again using bamboo nets and sell them to the pilgrims.

The authorities are striving to make the place attractive to visitors outside of pilgrimage time. These days there is a road to the site, where as people once had to embark on a long, taxing journey, either by foot or camel. And tucked behind the sanctuary, visitors can now use a staircase that leads up the “the sky.

“We can’t bring back the Aral Sea”

Kazakh ecologist Zauresh Alimbetova is fighting to save what was once the world's fourth largest lake. A nature reserve is now flourishing in the dried-up zone. A conversation.

The ocean doesn’t care about skin colour or origin: A surfer’s life in South Africa

Are we running out of water? (How I became what I am)

Ahmed Soura lost his family in Burkina Faso and suffered racism in Europe. When he danced to Händel’s “Messias” in Berlin, he understood: those who really want to be free must redeem themselves.

In the shadow of the volcano

To locals, the Sicilian mountain Etna both gives life, and – sometimes – takes it away.

Are we running out of water? (What's different elsewhere)

Talk of the town in Gothenburg

Why pizza is more important to people in Gothenburg than the NATO accession negotiations.

For tourists Momotombo volcano is one of the most famous attractions in Nicaragua. The writer Gioconda Belli has a very personal story to tell about it.