“We are mismanaging it badly”

in conversation with Aditi Mukherji 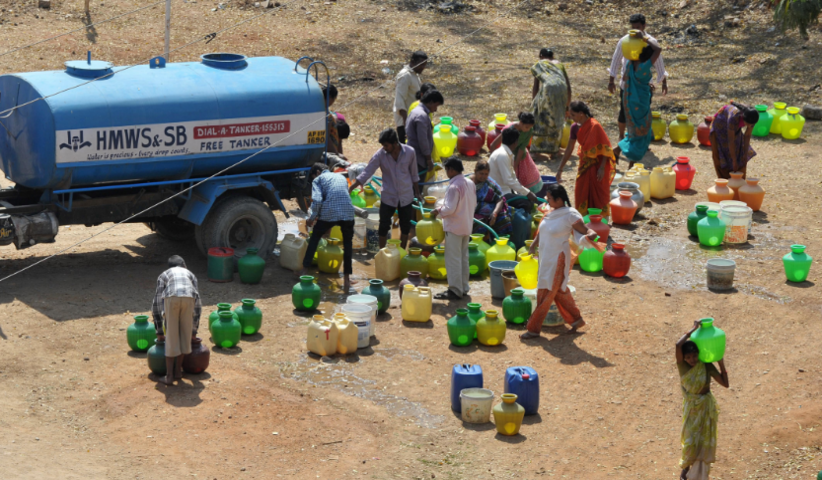 Melting glaciers, rising sea levels: scientist Aditi Mukherji explains why it is high time we change how we deal with water. A conversation.

Your research focuses on groundwater and fresh water. In a nutshell, how is it doing?

Globally, we do have enough water. If you could simply divide it into equal amounts, there would be no problem. But we all know we can't do that. In many places the reserves of groundwater are being overexploited, including food baskets which feed many people in their respective countries, such as North China, Northwestern India, the Plains of Punjab and Haryana, and California. Here groundwater is running short.

What about our rivers, our oceans and our lakes?

Overall, oceans are warming up as they absorb more CO2. We know there is excess CO2 in the ocean: we are seeing things like the coral reef bleaching in and around the coast of Australia. Rivers, meanwhile, are highly variable. It makes a big difference to the health of a river if it runs through a forest or agricultural land. River flows are changing but there is not one global trend. In some places they are declining due to both climate change and anthropogenic reasons like dam building and the overuse of water for agriculture. In other places, rivers are rising because of glaciers melting. Worldwide,we are seeing climate change intensifying the water cycle: for every degree of warming, the water cycle is intensifying by 7 percent, meaning that we have more extreme rainfall and also longer and more pronounced droughts.

Access to water is very income based and it is often women who collect the water - are certain groups bearing the brunt of shortages?

The paradox in almost all countries in the global south, possibly even in the global north, is that poor informal neighbourhoods often have poorer plumbing. Water is delivered in a tanker and costs way more than it costs to someone in a formal settlement like I do – in a comfortable neighbourhood in Kolkata, India -  where I can just turn on the tap. Poor people spend a disproportionate amount of their income buying water. There are also long queues, and that is the job of women and children, meaning women can’t earn and children miss out on education.

In 1974 a French political candidate René Dumont drunk a glass of water on television, saying he’d rather drink it now as it would be lacking in the future. How long have we known that our water is imperil?

In most religions, water plays a key or scared role. What role does culture play in our understanding and appreciation of water?

The deep cultural meaning of water makes it hard to cope when water gets scarce. I have studied the construction of hydropower dams in the Himalayas, which dry out a stretch of the river. Locals have religious rituals, for example, cremating dead bodies next to running water. When they, all of a sudden, have no water in their river because of the dam it causes horrible distress. You can imagine how emotional that can be for families. But on the other hand, there are paradoxes. The River Ganges, for example, is holy for the Hindu religion but at the same time it is one of our dirtiest rivers.

Your research into international water management showed that the Himalayan region could lose as much as 90 percent of its snow and ice by 2100. What would that mean for people in the region?

That is, I think, a moot question. It is not a situation where we can say we’d simply adapt. How can people adapt when their entire life is based watering crops with water coming from glaciers? What happens when those glaciers are gone?

“What will happen when the glaciers have melted?”

And looking ahead, is water a usual way of measuring climate change?

Yes because the climate affects every component of the water cycle from snow and ice, surface water, river flows, precipitation. Right now we are seeing more extreme precipitation, higher moisture content in the atmosphere and more rainfall. Water is incredibly important from a climate-change perspective because the majority of the world's population, in particular in the global south, depend on agriculture. For farmers, nothing is as important as rainfall. They are already experiencing climate change through changes in rainfall. That's true for those working in other so called climate exposed occupations like livestock, dairy, crop cultivation. Livelihoods which literally depend on water.

But in our debates we often pay more attention on CO2 emissions than water.

Yes! Climate action hinges on carbon emissions but now that we are already in a 1.1 degree hotter world, we have to adapt. Water plays an increasingly important role as people are adapting to changes in rainfall, changes in melting of glaciers, etcetera. Right now, carbon offsetting is also important. We are planting new forests to soak up carbon but if we have monoculture of the wrong species in a dry land area, it can actually cause a water crisis, decimating the local water table. Yes, we have to remove carbon dioxide from the atmosphere, but we also have avoid negative tradeoffs with water. People still don't realise how important water is as a manifestation of climate change and how people are already experiencing climate change through water. That might change with this year's UN Climate Change Conference. It will be held in Egypt where they are highly concerned about water shortages.

Do you think technology will come to our aid?

I think technology will play a big role, as usual, but technology has never rescued us. It’s really policies and institutions and the way they deploy technology that has rescued us.

It is pointless to generalise that India is water deficient or has a surplus: there are parts of India that have enough water and parts that have shortages. Our management has to be local - so does how we adapt to shortages. Take one major way that farmers cope: soil moisture conservation, or rainwater harvesting, that is always local. Another success by local governments  - with the help of  technology - has been the early warnings, around floods for example.

And how should we adapt cities in the future? Many will be more exposed to floods and other water disasters.

Cities worldwide are often built on river plains. If you have a built up area where there was once a river, it will try to flow along its natural path if there’s heavy rainfall. This causes extreme damage. We can safeguard our cities with land-use planning, protecting the river channels, protecting drainage systems. But when it is dry, people tend to forget that this is important: they just put up a building anywhere. That's not going to work in the future because we are going to see more extreme water disasters.

How much time do we have to change how we deal with water?

One positive story is that our projections for water use have always overestimated how much water we will need. Again and again, we have been able to do the same thing with less water. Agriculture is now growing more crops with less water than expected. Here, technology is playing an important role, but it is also down to proper incentives and policies. However, I’m pessimistic about when we will learn that unequal societies are bad for everyone. We can only really move forwards on water issues if we can make society more equitable, not just in India but worldwide.

The scourge of mountaintop removal

How coal mining is beheading the Appalachian Mountains and devastating a region.

“We will live on stilts, if necessary”

an interview with Hussain Rasheed Hassan

In the Maldives, the impacts of climate change have long been a reality. A conversation with Environment Minister Hussain Rasheed Hassan about disappearing islands and disaster plans.

How mines in the Andes are poisoning the water.

I am the river

New Zealand is struggling with bursting sewage pipes and contaminated drinking water. Now the indigenous population is to collaborate on solutions

Tangier Island lies off the east coast of the United States. Jennifer Gray visits an island on the brink.

“Everything here is defined by the ocean”

in conversation with Zoe Lucas