“We can’t bring back the Aral Sea” 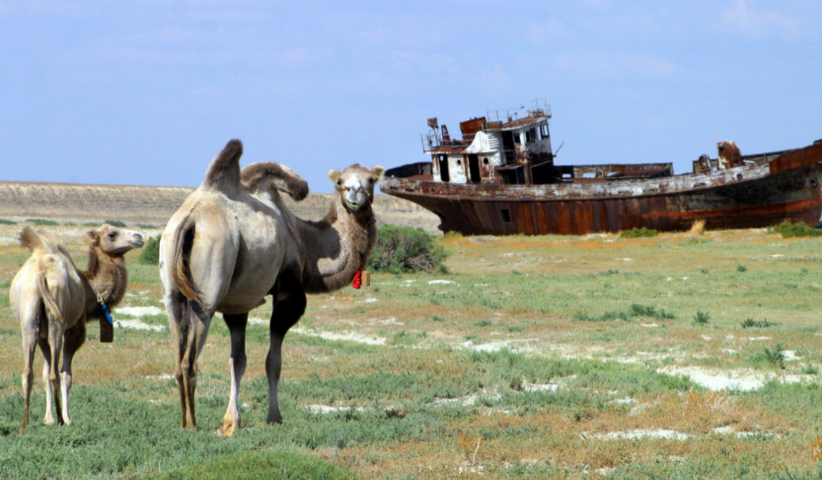 Camels passing by a wreck on the ground of dried up Aral Sea some 60 kms from the city of Aralsk. Photo: Vyacheslav Oseledko / AFP / Getty Images

Kazakh ecologist Zauresh Alimbetova is fighting to save what was once the world's fourth largest lake. A nature reserve is now flourishing in the dried-up zone. A conversation.

Ms Alimbetova, for almost 20 years you managed the Kazakh nature reserve, Barsakelmes, in the northern region of the Aral Sea. Until the 1990s, the area was also home to Barsakelmes Island but today, the “island” is surrounded not by water, but by desert. Ninety percent of the lake has dried up due to the diversion of vast quantities of water from its main tributaries, the Amu Darya and Syr Darya rivers, for cotton irrigation in Kazakhstan and Uzbekistan. How do you deal with these changes?

My generation grew up around the Aral Sea, and our parents had a hard time explaining to us how what was once the fourth largest lake in the world could have come to this. I don't want the older generation to be blamed. At the same time, my daughter can hardly believe that there used to be a magnificent lake here. For her, the "sea", as we call the salt lake here, is a kind of fairy tale, a fantasy landscape from the olden days. I belong to the generation that is fighting to preserve the Aral Sea.

The dried-up area of the lake now stretches over five million hectares. If you drive through this new desert, at some point you spy a hill: that was once the island. It measured 24 kilometres by 13 kilometres and was a functioning ecosystem, completely surrounded by water. The shoreline is still visible and you can make out traces of water, but the water itself gone. When I go back there now, I always ask the island to forgive us for what we have done to it and to the lake.

What is the significance of Barsakelmes Island for the locals?

There have always been legends about Barsakelmes; about mysterious animals that lived there, for example. The name Barsakelmes comes from Kazakh and means something like: the place of no return.

What was the ecosystem of the nature reserve like before the sea disappeared?

As far back as 1929, the island was designated a preserved habitat for ground squirrels whose fur was highly sought after. In 1939, the Kazakh-Soviet administration made Barsakelmes a nature reserve. Once fur production was halted and agricultural use of the land banned, biodiversity greatly increased. The period after the Second World War saw the reintroduction of the kulan, a species of wild Asian donkey considered extinct in Kazakhstan since the 1930s and still an endangered species today. Some Barsakelmes even call the island, Kulan Island. Goitered gazelles and saiga antelopes also flourished, so much so that a portion had to be relocated to other regions. All the animals drank the salt water.

When did this environmentally disastrous development start?

The lake began to dry up at the end of the 1960s; 20 years later, the water around the island had totally disappeared. The animals no longer had drinking water so the kulans were moved elsewhere, for example to the Altyn Emel National Park. The antelopes have migrated to Kaskakulan, a neighbouring island where there’s still water. Surprisingly, they return to Barsakelmes during the winter months because they can find enough food and drink melted snow there.

What measures have been taken to protect the animals?

With the support of international organisations such as Germany’s GIZ (Deutsche Gesellschaft für Internationale Zusammenarbeit) and Bielefeld University, we’ve managed to get the Kazakh government to include new areas in the nature reserve. There’s to be no intervention of any kind in the reserve - no forestry, no fishing – and as far as possible, it’s to be preserved in its original state so the animals are undisturbed. In 2005, it was decided to expand the reserve to include areas that were once under water and are now arid. The area has grown tenfold and now extends over 160,000 hectares, including a floodplain we call the delta and a tributary river, Syr Darya, as well as Kaskakulan Island and, of course, Barsakelmes. In these areas, there’s a good supply of food and drinking water. With the help of the World Bank, we were able to complete a dam in 2006 which protects the northern part of the lake, now called the Small Aral Sea. The microclimate has improved and biodiversity has increased. Fish stocks have risen, and water fowl such as pink flamingos, pelicans and swans nest in the Syr Darya river. Both the Small Aral Sea and the lake lands have been granted international protection status under the Ramsar Convention, a treaty for the conservation of wetlands. The economic situation of the local population, which traditionally lives from fishing has also improved.

Will the water return?

Clearly, we can’t restore the lake to its original size. There’s hardly any tributaries left, at least not on the Kazakh side: the Amu Darya no longer flows into the Aral Sea, and the Syr Darya only partially. When the lake dried up, salt and dust were stirred up from the former seabed and as a result thousands of tons of dust pollution scattered with the wind with terrible effect on both nature and on human health; allergies and respiratory, heart and vascular diseases all increased.

How is dust pollution being tackled?

In an effort to embed the dust and salt back into the soil, part of the dried-up seabed - about one fifth or one million hectares - is being re-forested with native plants and tree species such as saxaul or tamarisk. This underwent a test phase at the end of the 1970s and since 2007, a comprehensive reforestation has begun.

In 2016, the area was declared a UNESCO Biosphere Reserve and the medium-term goal is to achieve World Heritage status. What would that mean for the region?

It would bring additional investment and attention to environmental protection and help to underline to the local population the importance of a respectful approach to nature. It would also enable the promotion of projects across national borders. This is not just about the concerns of individual countries; international cooperation is essential for the protection of nature and culture.

Has the environmental disaster brought about a rethink with regard to water as a resource?

We have to win over the local population; to inform them about environmental protection and educate them about its benefits. Some people have understood how important it is to protect and preserve the environment. Others are driven by more existential concerns and want to use natural resources as long as possible. They’ve already seen the lake dry up and they’re afraid of losing even more resources, particularly in the Small Aral Sea and the delta region, where there’s a lot of fishing. When we talk about land restoration, we also have to consider the livelihoods of the local population. Alternative income streams need to be found. We need to develop and expand tourism and eco-tourism. The region is very interesting; we’ve discovered ancient settlements from the 12th to 14th centuries on the dried-up seabed, for example. These settlements, sometimes referred to as “the Atlantis of the Aral Sea”, are a throwback to a time before the lake existed.

So as the lake dries up, a culture is rediscovered?

Yes, you could say that.

Are we running out of water? (Books)

The start of a new era

Climate change presents us with unprecedented challenges. The Indian historian Dipesh Chakrabarty calls for a change of perspective and in the process rediscovers human history.

“Guilt is at the heart of being human”

an interview with Bart van Es

Guilt is a recurring theme in world literature. The author Bart van Es on why it still has not lost its current relevance.

More than any other element, water is charged with meaning in many societies and religions. These beliefs and practices continue to shape people’s day-to-day around the globe. An overview.

Are we running out of water? (Cultural spot)

The mud volcano in Pakistan's Hingol National Park is considered sacred by many Hindus.

Are we running out of water? (How I became what I am)

Ahmed Soura lost his family in Burkina Faso and suffered racism in Europe. When he danced to Händel’s “Messiah” in Berlin, he understood: those who really want to be free must redeem themselves.