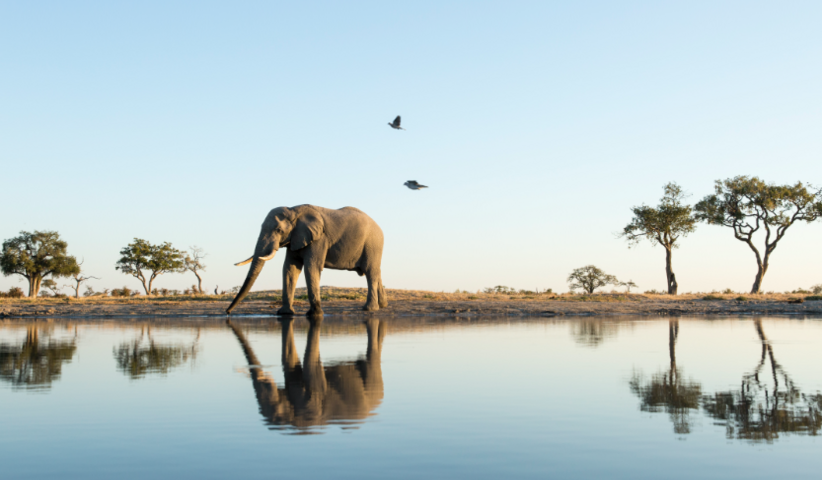 Anyone who tries to photograph the protagonist of this novel gets pictures of African landscapes instead. Photo: Paul Souders / Getty Images

What we describe as “foreign” today is often something that has simply become foreign to us. When people talk about “Christian values disappearing” due to the arrival of other religions, languages and histories, they tend to forget that even in Europe, the traditions and rituals that once shaped our lives have also become increasingly unfamiliar to us.

Author Bodo Kirchhoff's new novel begins with something that could once have been called either a miracle from God or  the work of the devil. A female migrant from Africa arrives in the south of Italy. There, nobody can take her picture. Every photograph of the tall, attractive woman in her mid-20s shows a random African landscape, not her.

The nameless teller of this tale – the novel is called Berichts zur Lage des Glücks, or in English, a report on the state of happiness – is an older freelance journalist who happens to be in Italy at the time He sets out to find this photography-resistant spectre who is first featured in the local media and then later in the national media too, as a long, particularly hot and news-less August drags on. What is this all about, this swapping of pictures? Is it a mistake, a cheap trick, or perhaps witchcraft?

The narrator takes the woman to Rome but drives complicated detours through Calabria on the way; he is secretly retracing a route he and a former girlfriend, Lydia, had taken. Then the adventure becomes more of an escape story – escape from the past, escape from immigration officials and escape from the increasing amount of publicity the mysterious stranger is getting.

“The desire to know, and to be known, is inescapably entangled with guilt and power.”

Bit by bit, the stranger tells her dramatic story. This includes a sheltered childhood in a small border town, a missionary school to which she owes her English language skills and a Christian education, her parents' death after an arson attack on their business, then just her own survival and finally her flight through Libya and across the Mediterranean.

After pausing in Rome, the trip ends in the Italian fashion capital, Milan, where the woman is to be the surprise star of a fashion show with activist and post-colonialist leanings. In the end, all that is left for the African woman though is further flight – this time she is escaping people who have said they will help her but who are in fact using her newfound celebrity status and beauty for their own ends.

If you take only this particular plot line, the story starts to sound a lot like a dictum from the play Andorra, by Max Frisch, which includes a line from the Bible, “thou shalt not make unto thee any graven image”.

Our author Kirchhoff demonstrates how the media often exploit those seen as “foreigners”. They care not at all about the foreigners' own perspectives and they marginalise foreigners' voices, all in the name of curiosity, morality and even affection or love.

However this story is particularly provocative because our narrators, and thereby also our author, are actually participating in this fetish for the exotic.

The African woman - who, notably, is never given a name - conforms to common clichés about exotica. She carries a butcher's knife at all times, she bathes in a stream and is able to build a roadside shelter out of twigs. Above all she is defined by her idealised physical being. Yet at the same time, she speaks perfect English and is well acquainted with European cultural and intellectual history.

Our view of the narrator, who, despite his candour, is clearly unreliable, is also purpose built. And here too, the object of our desire eludes us. Phantom Africa is the name of a 20th century literary classic by French author, Michel Leiris. In 1934, he analysed the paradox of the colonial gaze in an astutely self-critical way. The desire to know, and to be known, is inescapably entangled with guilt and power. This means that each glance, or gaze, never meets the reality of its object – especially when it comes to love.

But this book is about much more than a simple critique of Western self-deception and the paradoxes of postcolonialism. It is also more than a wide-ranging commentary on the integration debate – although it could be read as both of those things.

Just as the story tells of a labyrinthine journey through Italy, the narrative also takes myriad detours. The African woman is not the only one telling her tale. The narrator also confesses his life story, in almost religious terms. He talks about the fatal three-way relationship he has had with Lydia and her new partner, a well-known investigative journalist who sets out to find the mysterious African woman as though he were off on safari.

Another of the narrator's friends, a female cleric from his home in the Black Forest area in southern Germany, also plays an important role in the novel, acting as a commentator and his mirror.

“The whole novel is soaked in religious allusions and motifs.”

The narrator also writes this so-called report on happiness while in the African village of his lost love. Reversing the escape narrative takes the book to another ethnological level, if you like.

Doing this is risky for Kirchhoff. Now the book is no longer only about Western perceptions and fiction but also becomes a documentary of sorts, whose accuracy can be verified (and whether these chapters about Africa are successful can only be judged by the more knowledgeable reader).

Somewhat irritatingly the novel's three female protagonists are all connected by the narrator's confession. During the Italian trip, he is compelled to repeat his past and the African woman assumes the role that Lydia once played. The fact that, in the end, the female cleric travels to join the narrator in Africa is just one of the book's many twists and turns. These are constructed with the precision of clockwork where one cog meshes delicately with another. In this way Kirchhoff takes on the layered concept of the “imago” - defined as “a subconscious ideal of another person” – and spells this out in a psychoanalytical as well as theological way.

When visiting a place of worship in Italy, the African woman crosses herself and begins to pray. Even though the narrator once edited a church newspaper, he has no religious feelings any more. His own former rituals have become foreign to him. It is only later in the African bush, that he experiences a kind of epiphany, but about love.

Indeed the whole novel is soaked in religious allusions and motifs. The nameless African woman is a kind of Jesus Christ figure, from the stigmata on her hand to a scene in which die are thrown around her dress.

It is unclear whether there will be any resurrection after her own passion. But what this great novel does confirm is this: What is truly foreign today is that which transcends this world and our own minds.

Carefree into the new year

Talking about a revolution (Essay)

With ammunition and tear gas, Europe is trying to block refugees' passage to Greece. Rather than offering them security, Europe is presenting itself as vulnerable.

Looking history in the eye

The encounter between Europe and Africa at the start of the industrial era was marked by violence and a negation of The Other. The extent and the sweeping consequences of this are yet to be explored.