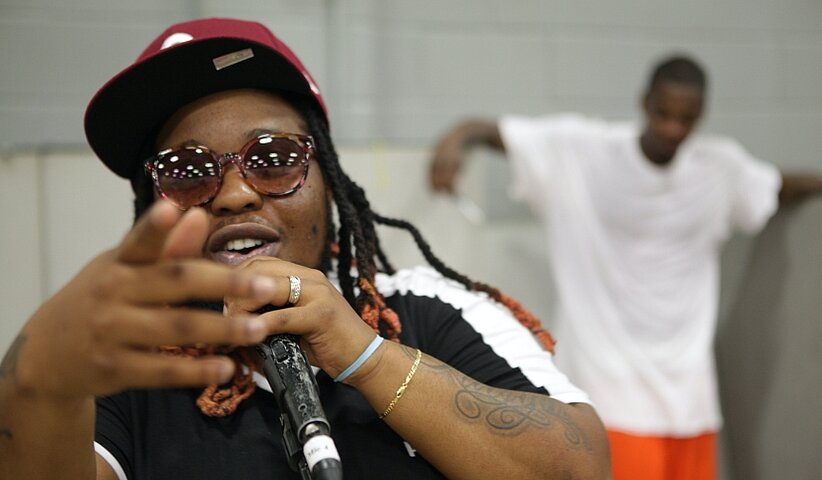 BL Shirelle at a performance. The musician and current co-director of DJC Records served ten years in prison herself. Photo: DJC Records

Songs that break down walls: Poet Fury Young and musician BL Shirelle run a record label for people behind bars.

Fury Young, Die Jim Crow Records is the first record label for imprisoned artists. How did the idea come to you?

Fury Young: It was very organic. In 2013 I started writing to people in prison. I basically wanted to make one of the greatest concept albums ever. I was inspired by The Wall, Pink Floyd, stuff like that. But then there were too many amazing people, amazing stories and amazing musicians to squeeze onto one album.

BL Shirelle: As the album idea started growing, we kind of morphed into a nonprofit organization and then into a record label. We went from trying to tell the story of mass incarceration to providing a platform for people to tell their own story.

BL Shirelle, you’re co-director of DJC Records and also one of the label’s artists. How did you get involved?

BL: I came along in 2015. I was incarcerated at the time, and Fury reached out about the album. It was my second adult statement, and I really wasn't into the idea of music at the time: I was in a very dark place. But his ideas inspired me to write for the album. When I got out, we were able to shoot the video for one of my songs and I got paid for my first gig. I was like: Oh wow, you can earn money doing this! (laughs)

F.Y.: BL always says that I had a very micromanaged document of a blueprint. Because I had this idea of the concept album in mind, and I would write to people, like, “would you like to write a song about the anxieties of reentry?”. BL wrote that song in five minutes.

Who can be an artist on DJC records?

BL: We’re not one of those organisations that's just out to make music for therapy and shit. We work with high talented musicians. Regarding the type of music: We’re a genre agnostic label. Whatever you do, if you do it well, we can find a spot over here for you.

F.Y.: Also, part of our values is that we don't discriminate based on people's crimes. For example, on our first album, Michael Tenneson is also taking part, that’s pretty high bar – he’s a lifer, convicted for five murders. But in general, our mission with Die Jim Crow Records is to dismantle stereotypes around race in prison, in America, by amplifying the voices of justice-impacted musicians and artists.

How does especially racial injustice play out in the US prison system?

F.Y.: Basically, the prison system is a racially coded caste system. You could go all the way back to the convict leasing system after the abolishment of slavery, that disproportionally affected Blacks. But essentially, it always had this racist thread. Prisons became a bit more civilized during the civil rights movements. But the war on drugs and mass incarceration grossly affected People of Color. Between 1990 and 2005, there was a new prison built in America every ten days. So that's when mass incarceration just went bonkers. The laws have always disproportionately affected black folks. They continue to get the short end of the stick. The book “The New Jim Crow” by Michelle Alexander gives an impressive overview of this development and has inspired me a lot for our label.

Does the name “Jim Crow” allude to this background?

F.Y.: It comes from a song in the early 1820s. In it, there is this character called Jim Crow, a very exaggerated, stereotypical white person's idea of a Black person. Throughout history, the term eventually became used to describe laws that segregated Blacks and other ethnicities from the ruling white class.

Why is music a good way to bridge the gap between those inside and outside of prison?

BL: At least in America I think music and sports are our way of communicating. They both offer a level playing field. It's the space where nobody really cares about your background or where you’re from. Music helps humanity to acknowledge itself.  It can enable others to see you as just another person. It’s the tool we use to try and spread that message.

The power to make someone wait

In her book »The Ungrateful Refugee« Dina Nayeri writes about the arrogance and prejudices of those who have never been forced to leave their home country.

About a special animal in the USA

Above (How I became me)

I grew up as though I was an extra in the film, Anna and the King of Siam: Among royalty in Phnom Penh in the 1950s and ‘60s. My father led the orchestra there. Since my birth, I had travelled with him because he wanted me to become a musician. If he didn’t take me, and I was forced to stay behind with my mother, I would dig a hole, get into it and cry for my father as though my life depended on it.

Make an instrument that sounds like the sea: a mbira.

In the shadow of its big neighbour the USA, Canada is looking for its place in the world. A reflexion on my country.