The price of survival 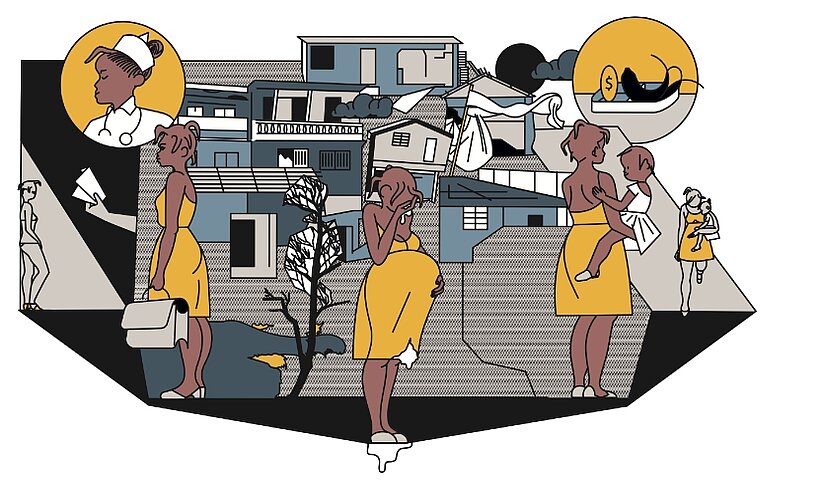 A single mother and her struggle to survive in Port-au-Prince. Illustration: Eva Revolver

For years, Haiti has been slipping from one crisis into the next. The international community has looked away from the Caribbean nation and the Haitian government no longer cares for its own people.

Haiti, this republic that shares the island Hispaniola with the Dominican Republic, in the middle of the Caribbean sea. Haiti, one of the poorest countries in the world, only a few hundred kilometres away from glitzy, glittering Miami. Haiti, a country that still hasn’t recovered from the devastating earthquake of 2010.

But also: Haiti, a land with a fascinating history. It was here that in 1791, the locals celebrated the last victorious fight against slavery. It was the only country in which a revolution by slaves led to human trafficking being abolished. At the same time, the small Caribbean nation was also fighting for its eventual independence from colonial France in 1803. That was the year that Napoleon Bonaparte experienced one of his first great military defeats at the battle of Vertières in the north of the island.

These major events are obviously a long time ago in Haiti's timeline. In 2022, the inhabitants of the island are embroiled in another fight altogether. Instead of wrestling with a former colonial power, today they are fighting with their own decaying system. Mostly they're on their own doing this. Political instability, corruption and poor governance have repeatedly shattered the country.

That is why, in the week starting February 7 this year, countless locals working non-permanent jobs demonstrated for an increase in the country's minimum daily wage to 1,500 gourdes (around 13 euros per day). These went on until the protests were brutally suppressed by the Haitian police force, an agency of the state that is known to have links to local criminal gangs and in whose presence, two pregnant protesters lost their lives that day.

Anyone who wants to survive in Haiti today must pay a price – and if you want to understand what kind of price we're talking about, then Cristie's story is a good example. I myself got to know Cristie in the Haitian capital, Port-au-Prince. she told me her life story there. Cristie isn’t actually her real name but it is better that this is not used.

Her story begins in the Haitian provinces where she was born to a poor family. After graduating Cristie moved to Port-au-Prince to continue her education. There she lived with an aunt who made ends meet by working as a vegetable seller in a low-income neighbourhood controlled by armed gangs.

Her aunt could only provide Christie with the bare minimum but this was enough for the young woman. In a country where wages for a full day's work are often not more than 5 euros, you learn to make do with what you've got – even if every now and then, you have to put your morals aside in order to survive.

“So she did what many other young women in Haiti do: She got to know one, then two, men and began selling her body in order to cover her monthly costs.”

In Port-au-Prince, Cristie dreamed of becoming a nurse. But competition to get into the only state-run nursing school, with free training, was fierce. Cristie didn’t pass the entrance exam. She had not been taught what was required at school in her hometown or in Port-au-Prince, so she was never going to pass. Neither did she have the money or the contacts to get into the school in any other, less savoury way.

After being turned down by the school Cristie tried her luck at one of the many, more dubious private nursing schools, ones that reward students with a questionable diploma at the end of the course. These private schools are accredited but the Haitian authorities hardly ever check that the training meets national standards.

This isn’t just a problem impacting nursing in Haiti, almost every public sector has this issue. To complete her studies, Cristie had to pay 10,000 gourdes to start at the school and then 15,000 gourdes in annual academic fees. That works out to more than 200 euro, a very hefty sum for a girl of little means from a poor family. And that is even before the costs of clothing (most of the schools require a uniform), food and transport were counted. Cristie suspected that, as a Haitian woman, you either had to get really lucky to be successful, or you had to have the right contacts. And she had neither.

So she did what many other young women in Haiti do: She got to know one, then two, men and began selling her body in order to cover her monthly costs. And so, for a while, she managed – if not really well, then at least she got by. A year before the end of her studies, the thing she had always dreaded happened. She fell pregnant. Because the young would-be nurse didn’t know which of her clients was the father of the child and because she didn’t have enough money for a professional abortion, she let days, then weeks, then months, pass before she let anybody know about her condition.

“Apart from going to see the gynaecologist who had informed her about the pregnancy, Cristie had never been to a doctor.”

Finally, when she could no longer hide her pregnancy, her aunt – a devout Protestant – kicked her out. Cristie went first to her parents. But they too told her she would have to take care of herself because she had sinned. The daughter upon whom they had pinned all their hopes was dead to them.

Eventually one of the men in Port-au-Prince, one of the possible fathers, was the one to give her some money. It was just enough to rent a small „yon pyès kay“, a tiny room with no window, water, toilet or power. A miniscule space in the middle of a large apartment building in which all the tenants share a bathroom, where sometimes the water wouldn’t even come out because the public water service would only work for two or three hours at a time. Many of those living there had no choice but to buy expensive bottled water.

Cristie cowered in the room for a few days, only leaving to get herself some food – some grilled bananas or a little bit of chicken or pork, the kind of food sold on the street. She would stroke her growing belly and nothing worried her more than when she began to feel signs of life in there. To bring a new life into this world, into this city, where everything was against a good life, seemed unimaginable.

Slowly though she began to love the child inside her and she realised that it was doomed if she, its only guardian, did not do everything within her power to protect it. Cristie decided she must fight for her unborn child, and also that she would have to give up her dream of becoming a nurse at least for a while.

Apart from going to see the gynaecologist who had informed her about the pregnancy, Cristie had never been to a doctor. In a land with utterly inadequate health care, where the luxury of health insurance is only enjoyed by a small minority and a visit to the doctor costs at least 1,500 gourdes, her experience was far from uncommon. Despite all of these hurdles, Cristie has a healthy three-year-old daughter today.

She is in bed and has just been recovering from what people in Port-au-Prince call the „bad fever“. Nobody here is talking about COVID-19. „So what are really the greatest problems that you have to fight in Port-au-Prince today?“ I ask her. „I really don’t want to talk about all the terrible looks that I have to deal with because I have a child and I'm not married. That I don't have a 'boss' in my life, as we say here,“ she tells me. „Neither do I want to talk about my family, who turned their backs on me. When my child was born, my parents suddenly seemed to remember that we came from the same blood. The worst things is that I constantly feel alone. I can't even ask for financial assistance from the father of my child and the public hospitals are miserable. While the examinations are free you have to buy your own expensive medicine in the chemist and I just can't afford to take my daughter to a private clinic. That’s why I pray every day that she won't get sick.“

„The other nightmare I have is that, at some stage, I won't be able to feed her,“ Cristie continues. „I am currently working as a cashier at a chemist for minimal pay. I barely make 5,000 gourdes in a month. It is a constant trial to try to feed two mouths with so little money. The government has never set up any program to help single mothers.“ Cristie also worries terribly about school. Only the upper class in Haiti can afford kindergarten care. Once the child is three, care costs between 15,000 and 30,000 gourdes.

So how is it going for Cristie now? As with so many young, single mothers in Haiti the answer to that question is not particularly satisfying.

Her daily life and her worries reflect the terrible economic situation in Haiti. Sometimes cash transfers from relatives or acquaintances overseas help Haitians keep their heads above water just that little bit longer. But other times, there is nobody there to help, in this country that the international community seems to have forgotten altogether.

Translated from French into German by Luisa Maria Schulz

How to write about things you haven’t experienced yourself.

The hunters and the hunted (In practice)

A hotel for women writers

The German-French collective “Réseau des Autrices” offers female authors a virtual home for their ideas - and a space for political debate.

Who deserves a seat at the negotiating table?

The future of foreign policy is feminist, says activist and author Kristina Lunz in her new book. But what is she actually talking about?