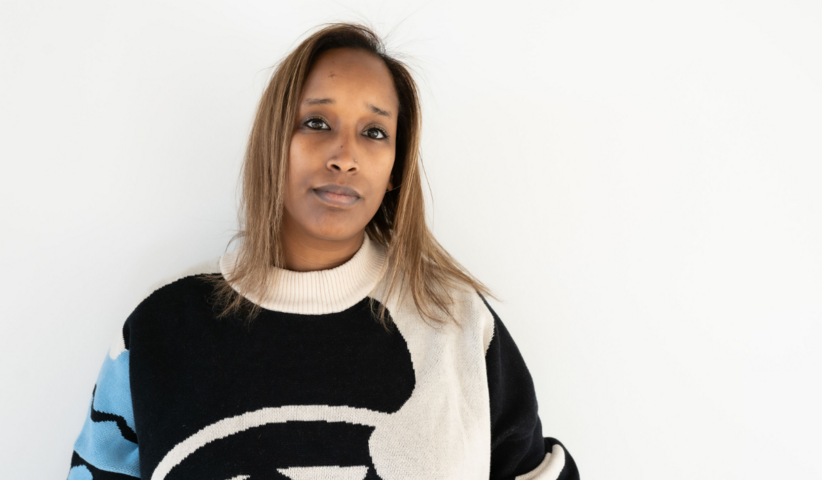 From a Somalian childhood to reading books in Paris and writing in Germany: On why I had to learn a foreign language to express myself freely.

In our spacious compartment in the last train wagon hurtling towards the south of Germany, I ask both my boys to give me a minute, that I have a question for them. One looks up from reading his Donald Duck comic and the other pauses his Spotify. Four eyes looking at me intently, I say” do you feel like you have a voice?”.

Growing up as a young girl in East Africa the concept of “voice” was similar to “feelings”: nonexistent in vocabulary and content. Both were strategically atrophied, oversimplified by the authority of culture and its offspring trauma. I felt misunderstood, that I did not belong, that I was the different one floating in a sea of analogy. I became an island, and like an island, isolated.

In a sense our country, with its longest coast line, jutting out like an elegant knife towards the Indian Ocean, was an island. The inhabitants sharing close genetic degrees of relation, speaking the same language, praying to the same God. A triple threat- homogenous in language, ethnicity and religion. A tightly controlled identity where curiosity, especially coming from a precocious first daughter, was seen as a danger rather than a sign of intelligence. A place where a voice is singular, unquestioned.

“With a simple signing of papers and astronomical tuition fees, my brothers and I enrolled in the American School of Paris.”

The day I first heard English is the day I learned what ambition was. How hard I would go for something I wanted, triggered by something I needed. I heard how my brothers talked to each other, a language foreign to the one we shared with our parents or the one I learned at school. The excitement and coolness they exuded using these new words, the ease in which my lips repeated them. I had an seven year old’s indescribable inclination to possess it.

I had been going to Arabic school for about two years. A school filled with strangers, red sandy courtyards, devoid of my siblings as I was born in between four boys, my two sisters having the entitlement bestowed to those of being born last. A school where my father thought his daughter should go to as it tied closely to our religion. Early lessons in the intentional agility of the lines men drew between culture and religion, the subtle pre-menstrual sedations of voice.

I threw a fit my mother said. Incited a series of events including the hiring of an English teacher teaching in East Africa, lessons of mastering this new language in our vast properties under shaded trees. I was a good student and passed my entrance exams for the American School of Mogadishu. I wouldn’t get the chance to begin, my school uniform remaining new and unwashed. The rumors in the countryside become a tangible war in our capital and we refuged to my birth city of Paris. I found I no longer needed to struggle to be educated in this new language. With a simple signing of papers and astronomical tuition fees, my brothers and I enrolled in the American School of Paris.

“I began understanding the importance of my chosen language when I moved to Germany, where suddenly I was a minority writer, in language and phenotype.”

My memory places me in its library, where my obsession with books began. I read voraciously and often. I fell into the stories these pages offered, worlds where I did not need to ask permission from my parents. World’s drastically different than mine, filled with ideas, behaviors, lives un-resembling my own strict one. My wishes were not barbies or toys, they were always books, books, books. Interior windows where my imagination found me running freely in endless green meadows, battling with bullies, falling in and out of love, sitting with fictional families in homes that wafted rich baked goods. Those formative years, all the characters I read had hues much diluted then mine.

I never questioned why I wrote in English, a third language I had strengthened more than my mother tongue or second. Growing up the rest of my childhood in America, this self-reflection did not need to be explored. I began understanding the importance of my chosen language when I moved to Germany, where suddenly I was a minority writer, in language and phenotype.

“Many of us do not get the privilege to choose the language that strengths our voice, that waters it rather than suppresses it, that encourages it rather than abuses it.”

Still, it was not easy. It would take almost thirty years to utilize this power. The first twenty it lay dormant, reclusive in my head and my books. My writing hidden from the public due to the disapproval of my parents. This language required me to only write in truth, something that was still too complex for me to fully grasp as it carried with it the slimy residue of guilt and shame.

As I became a mother and encouraged my children to have a voice, severing the generational cycle, I found myself standing alone in my own hypocrisy, not having even used my own. I started sharing my work to the public, in a country where my language was taught in grade schools but hardly practiced after graduation.

“I thank the little me in Mogadishu.”

It was the threats that finally birthed the urgency to use my voice, loudly and publicly. Reading to German audiences, I started to notice how my voice could be used against me, my narrative of truth ignored for the brownness of my face. The very language I had fought for as a child as my ticket to freedom, that I had quietly used to work through my traumas, and now had finally began sharing. The language that required me to always be truthful became secondary to how I looked, where I came from, the spring in my curls. I became a highlight reel, descriptions and assumptions used as the erasure for my words.

The surety of my voice matured, thickened like the dominant arm of a professional tennis player. I volley the questions back, taking control of my narrative, shaping and influencing the conversations towards the importance of my writing rather than the delicate shape of my face.

I thank the little me in Mogadishu. She didn’t have a voice, but she had intuition, she had dreams even if she couldn’t name them.

I thank her as I watch my boys on the train. The persistence of me in in the shapes of their eyes, the color of their hair, the freedom in their thoughts. Perhaps, I think to myself as they answer with eagerness untouched by trauma, the more interesting question would have been “do you know what it feels to not have a voice?”