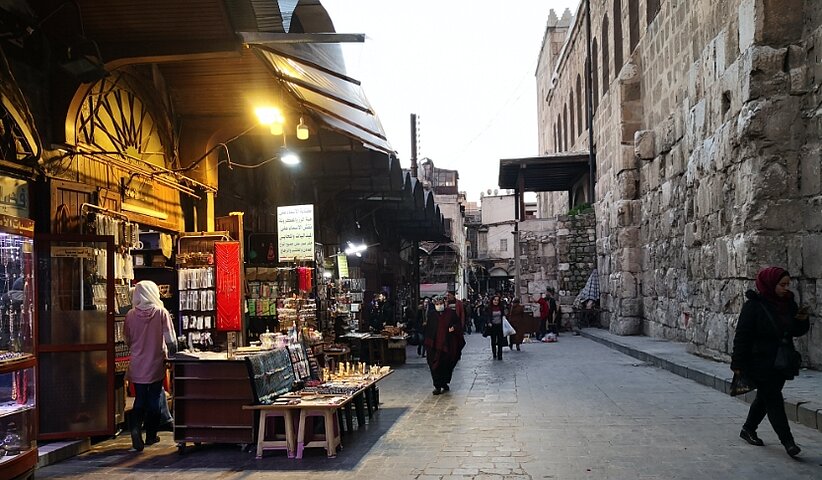 A treasure trove of local handicrafts: the Suq al-Hamidiya in Damascus.

Entering the “Handicraft Market” in central Damascus through its wide door, and taking a quick look at its varied old shops, gives a sense of time travel. The market building dates back to the 16th century, and was opened as a collective place for craftspeople around 50 years ago. As a result of the war that has been ravaging in Syria for many years, there has been massive loss of life and most economic sectors have been destroyed. Handiwork wasn’t immune from the flames.

Inside his small shop where he sells famous Damascene Mosaic, wooden art work that decorates boxes, mirrors and other different pieces, Mahmoud is busy cleaning the store front. Despite the very few customers that are visiting the souk, he insists on opening each day. “Our biggest problem now is the lack of electricity, and this effects our work hugely,” he tells me.

Producing any Mosaic piece now requires more time and effort than before, as the country is experiencing severe shortage in fuel and long hours of power outages. As a result, craftsmen who depend largely on electric tools, can only work for limited hours, and need to pay large sums of money to run power generators. However, as the fifty-years-old-man tells me, the work cannot stop. “We are adjusting to all circumstances, making a stand that our traditions cannot die”.

Not far from this market, you can walk to reach the famous covered souks and hundreds of old shops that are located in the old city of Damascus. There, you might need days after days to discover endless secrets about Damascene handicrafts, from hand-made coloured rugs, to Qishani pottery, to Brocade and Aghabani textiles. At the same time, you cannot help but feeling the pressure the handcrafts people are working under. In a small shop that sells different hand-made gifts, the shop owner, talks sadly about  his work: “handiwork is the first sector that get affected by conflicts, and that last to recover. Who would pay tens of dollars to get luxuries, while we struggle to meet our basic needs?” In particular, it is getting more difficult to import goods from abroad, meaning it is no longer easy to get fabrics, threads, ceramic, and many other materials that are essential for handmade work.

Also Mouhammad Hallak, Abu Naim, who runs the glass workshop in Khan al-Zoujaj, has similar difficulties. “We can hardly find fuel to run the oven. There are almost no customers and we struggle to find manpower,” he says. He feels sorry that his sons do not want to learn the profession that he inherited from his father and grandfather, but adds: “Who would want to sit ten hours a day in front of a very hot oven, to blow glass that almost nobody would like to buy?”.

But for Abu Naim, who is in his sixties, spending the day in his old workshop is a source of strength. “As long as I have strength, I will keep this place open. This is the legacy of my family, and my city, and we will fight, with everything we’ve got, to keep it alive”.

The price of survival

For years, Haiti has been slipping from one crisis into the next. The international community has looked away from the Caribbean nation and the Haitian government no longer cares for its own people.

In conversation with T.C. Boyle

The writer T.C. Boyle explains why he writes about animals and how he communicates with them. An interview.

Journalists who report the truth in the Central African Republic are putting their lives on the line. The editor-in-chief of Radio Ndeke Luka explains why.