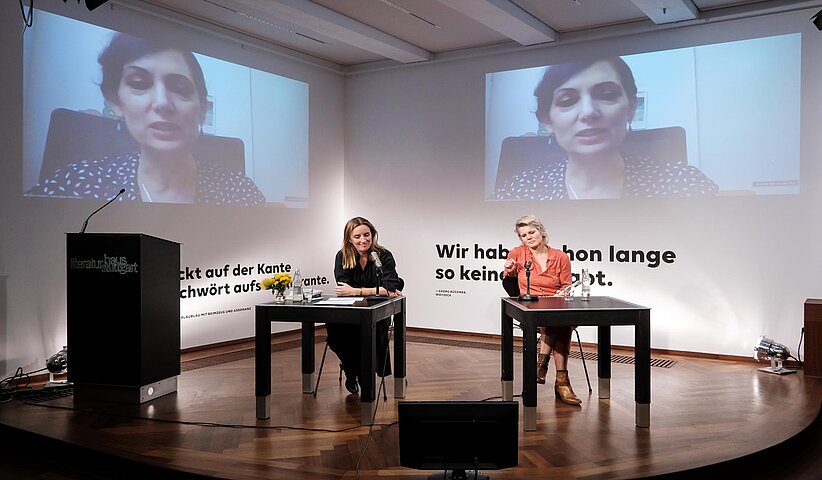 From the event Being Sensitive at the Stuttgart Literaturhaus, with Naika Foroutan (on the wall screen) and Svenja Flaßpöhler (right), moderated by Jenny Friedrich-Freksa (left). Photo: Literaturhaus Stuttgart

Ms Flaßpöhler, in your book “Sensitive” you discuss what you call “contemporary sensitivity”. Debate over what compromises racist language, the abuse of sexual minorities, and discrimination against women is hardly new.

Svenja Flaßpöhler: Yes, but now it’s deeply entrenched. In my book, I attempt to put aside the trench warfare and find out what’s caused the deadlock.

And what is the cause?

SF: The fundamental question is to what extent society in general should adapt to the vulnerabilities of particular groups (by fostering inclusive language, for example) and to what extent groups and individuals should look to themselves to meet the challenges of living in a liberal democracy.

Of course, not everyone in a group is in agreement. Not all women, for example, make identical demands or feel similarly attacked.

SF: Absolutely. And similarly, terms that some people of colour find discriminatory are used with pride by others. What seems important is that we look at ways in which we might find a new middle ground between views which have become polarised. On the one hand, there is an absolutist form of sensitivity in which, if someone says they’re hurt, then that is true, no further discussion needed. Here, sensitivity brings about rigidity: an exhibition might be cancelled because certain images could be seen as racist. But an absolutist form of resilience is just as problematic. If someone experiences discrimination on their daily commute, simply because of their darker skin colour, it would be similarly wrong-headed to suggest growing a thicker skin. I'm interested in a third position, one which embodies both sensitivity and resilience, and which recognises that resilience, when correctly understood, is not the opposite of sensitivity but rather is born of vulnerability and carries vulnerability within it.

“Of course, victims exist. But so too does a comfortable tendency to blame the structures of oppression rather than seizing one's own freedom.” - Svenja Flaßpöhler

What is sensitivity, for you?

SF: In the history of philosophy, an important distinction is made between sensitivity and sensibility. Sensibility has a positive connotation and means an active awareness of the boundaries of others. Sensitivity, on the other hand, has a more negative connotation as it implies a passive reaction to external stimuli. Irritability and sensitivity are two sides of the same coin.

In your book, you describe the ways in which sensitivity has been refined over centuries. Could one not see the current moment as civilization's inevitable next step?

SF: Logically, yes. Increased sensitivity is an indicator of a society’s progress. But the question is whether we’re slowly reaching a point at which this move towards increased sensitivity has tipped over into something more destructive. I think we have. We need to operate on two levels simultaneously. On the one hand, we must be very clear-sighted about society’s problematic structures, particularly in the area of racism (and that includes unconscious bias). On the other hand, we should remain focussed on the individual. We need to strengthen and empower people to seize the opportunities offered by a society which is actually very emancipated. For me, the latter is where we sometimes come up short.

Ms Foroutan, you’ve been conducting research with migrants for many years. What is your assessment of the situation?

Naika Foroutan: I very much agree with the idea that this is a process and that certain narratives also have a tactical function. I’m a sociologist. I’m not interested in the individual but in society. For this reason, I would transpose the word-pair "sensitivity/sensibility" into "equality/equal rights". If you’re excluded when applying for a flat or a job because you have a certain name, that has nothing to do with sensitivity, but rather with inequality. For decades, inequality was rendered invisible using stereotypes. For example: women are too emotional to be leaders, migrants are not interested in education. Now that we are finally recognising and naming these structures of inequality, we should be wary of jeopardising the process by dismissing it as over-sensitivity.

“Now that we are finally recognising and naming the structures of inequality, we should be wary of jeopardising the process by dismissing it as oversensitivity.” - Naika Foroutan

You wrote back in 2019 that we live in a time of hyper-sensitivity. What are its roots?

NF: Right now, many of our shared certainties - ideas and positions previously seen as self-evident and not at all informed by sexism or classism - are suddenly being called into question. When an entire social group stands up and corrects you, it calls one’s entire sense of self into question. Take the climate crisis. Here, we can see a deep rift between those who believe climate change is man-made and those who believe it won’t be as terrible as predicted. We end up with a deeply polarised society. Assuming that I conceive of myself as a gender-neutral, anti-racist woman, it’s probable that concern for the climate is also integral to my sense of self. Yet that self-image may also have cracks. For example, were I to drive a diesel-powered BMW and eat a lot of meat, I would have to make sense of that, to reconcile it with my own idea of myself. I can either change my behaviour or I can look at my eco-warrior neighbours and think: You are real climate fascists. My resistance towards them can be seen as an attempt to reconcile the dissonance between my self-image and my actions.

The world has been out of whack for a while now with the climate crisis and the Corona pandemic. Is meaningful discussion possible given the current state of flux?

NF: I know what Ms Flaßpöhler means when she says exhibitions and books are being banned, but I would question whether these absurd debates occur frequently enough for meaningful social analysis to be drawn from them. Is one actually not allowed to say anything in this country any more? It’s possible to enumerate every single one of these cases which probably indicates how little they number. On the other hand, women being spat at in the street and having their headscarves torn off: that is a daily reality. You just don't read about it in the papers. Yet the vast majority of the German population wants gender equality, climate neutrality, and an end to racism.

SF: And naturally, when new groups or gender identities start to speak out, it puts a society under tension. I agree that the discussion of Cancel Culture often lacks nuance.

Is the level of correctness required, in order to be “politically correct” unrealistically high?

SF: As far back as the early 19th century, Alexis de Toqueville described the paradoxical situation whereby societies grow more sensitive to difference as their egalitarianism increases. We live in a society that is more equal than any before. The fact we talk about equality so much is proof of how equal we actually are and how nuanced our understanding of equality has become. As far as gender is concerned, I think we’ve reached a point where the problem is mainly the patriarchal thought patterns we still carry within us and which we use to devalue ourselves.

You say that the individual should look to his or her self while Naika Foroutan has stated the opposite: that society itself must be made more equal. Which, for you, is the way forward: strengthening the group or bolstering the individual?

SF: A group can also support and fortify the individuals contained within it. Yet I often observe the opposite, that members of a group tend to confirm each other’s claim on victim status. It’s always others who have to change, never oneself. Of course, victims exist. But so too does a comfortable tendency to blame the structures of oppression rather than seizing one's own freedom. We live in a highly complex, transitional period which can no longer be adequately described by the term “patriarchy“.

How would you describe this transitional period?

NF: We’ve reached a point at which old thought patterns are breaking down. According to my analysis, that’s what’s causing all this conflict between us: we can’t see the end point yet. The greatest change will undoubtedly be with regard to gender. Will we still live in a binary gender system? No one can know because it’s so new. That's why we’re trying all these extreme positions out for size.

Is it true to say that some disputes, such as the conflict over gender-neutral language, are an evasion? Could they also be viewed as a failure to tackle fundamental injustice?

SF: I would not simply dismiss the language debate as superfluous. It’s clear to me that language has a performative function in that it not only describes reality but creates it. As to whether the generic masculine form needs to be abolished: I think not. The masculine form is by definition gender-neutral; we just need to ensure that a panoply of gender identities are assumed when we use it. I find it dangerous how quickly one can be labelled anti-feminist for chosing the masculine form over a gender-neutral one, and how one’s preference becomes a topic for polemic. By all means, let’s debate, but using facts not pure opinion.

NF: No one wants a “cancel culture” like the one operating in American universities. At the same time, certain communities, such as the trans community or Black people have been so long excluded from taking centre stage, that I feel they’re allowed to say - and to keep saying: It’s our turn now. It may well be a monologue, but it’s restorative. Let others listen for a change. And let the next step be a return to dialogue. Oppressive social structures have been in place for decades; you don't simply leave them behind with a couple of years of #MeToo.

The conversation was conducted by Jenny Friedrich-Freksa in November 2021 as part of the literature festival LOSGESAGT, a project of the Literaturhaus Stuttgart and the Federal Agency for Civic Education. You can watch the conversation, which was edited for this issue, as a video recording here: vimeo.com/626695898

by Minh An Szabó De Bucs

The former British colony wants to become a metropolis of culture. To do so, it is developing a stretch of waterfront into an arts district.

in conversation with Daniel Libeskind

The New York architect spent his childhood in Lodz and later became world-famous with buildings like the Jewish Museum in Berlin. In an interview, he talks about his ties to his homeland and how Polish architecture deals with the country's history.

In Hungary, a newly enacted law complicates the work of local NGOs. Now it is up to European partners to take a clear stance.