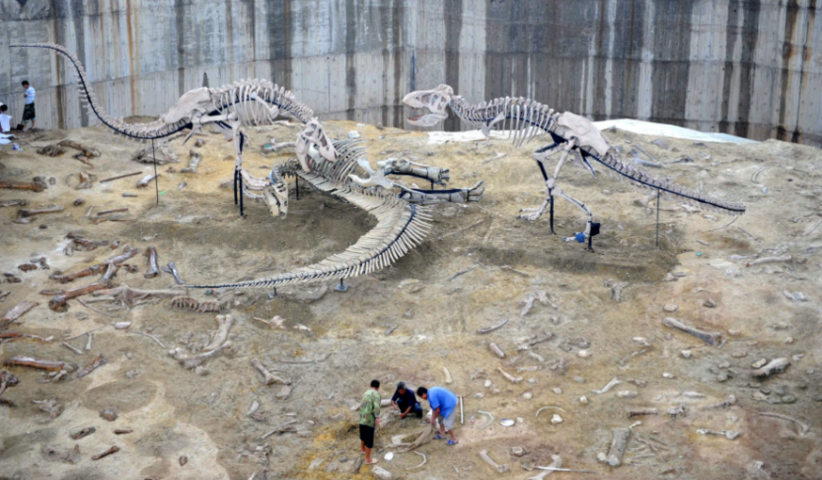 At a dig site in Zhucheng, palaeontologists managed to reassemble the bones of several tyrannosaurs. Photo: Xinhua / Eyevine / laif

There have been more dinosaur bones excavated in Zhucheng, China, than at almost any other location in the world. But it all started with a search for something completely different.

At the beginning of the 1960s, before China's Cultural Revolution, people in the city of Zhucheng had high hopes for industrialization. The provincial authorities had sent a team of engineers there to look for oil. However the engineers didn't find any of the oil that China needed so badly during their drilling. Instead they found a wide array of dinosaur fossils.

Locals had often used what they called “dragon bones” as folk medicine to help treat broken bones or other ailments. But the fossils themselves had never been investigated further. That was all about to change. Over the next few years, researchers discovered the Asian cousin of the Tyrannosaurus Rex, the  Shantungosaurus, or Shandong Lizard, there. It was once the largest dinosaur in Asia. And today, the city of Zhucheng is well known for museums where you can see all of these prehistoric funds.

China's research in this area actually began with a Swedish mining expert. Early in the 20th century, a Swedish geologist called Johan Gunnar Andersson was searching for mineral resources like iron ore and coal for China's newly formed Beiyang Government when he came across a series of dinosaur fossils. This quickly became Andersson's field and he was able to assist China's first one of China's first palaeontologists, Yang Zhongjian in his studies study at the University of Munich in the 1920s.

Yang Zhongjian was involved in the excavation of the Peking Man fossils, the world famous 750,000-year-old fossils found in a cave southwest of Beijing. However Yang Zhongjian's greatest achievements may well have included the discovery, and then naming, of the Lufengosaurus and the Mamenchisaurus constructus.The name of the Mamenchisaurus constructus actually means “reptile of Mamenchi construction”. The fossils were found accidentally near a highway construction site in the county of Yiban, in the province of Sichuan in the 1950s. The name of another dinosaur, the carnivorous Gasosaurus constructus, indicates how it too was found. It was discovered in 1985 during the construction of a gas plant in Sichuan.

“The centrepiece of the park is a natural feature, about 500 meters long and 26 meters deep, called Dinosaur Gorge. On one side of the gorge, giant fossilized bones protrude from the rocks.”

This kind of accidental discovery doesn't just happen in China. Many fossils have been found in the US and Europe, thanks to finds made during mining or construction. If railroad tracks had not been built right across the US after the American Civil War in the 1880s, then many paleontological discoveries there would never have been made. In Germany, the Archaeopteryx would never have been discovered in Solnhofen, Bavaria, if not for the invention of lithographic printing first. Limestone was needed for this printing process, invented by Alois Senefelder in 1798, and the Archaeopteryx dinosaur bones were discovered during limestone quarrying.

The megastar of the dinosaur world everywhere, and also in China, is obviously the Tyrannosaurus rex. One of the three dinosaur museums in Zhucheng is built on a 2008 excavation site and dedicated to the Zhuchengtyrannus, which was discovered here. The Zhuchengtyrannus is smaller than the North American Tyrannosaurus Rex but belongs to the largest genus of the Tyrannosauridae family in Asia. If you look down into the pit here in the museum, you will see the bones of various other dinosaurs scattered around the Zhuchengtyrannus. There are tail vertebrae, jaws, ribs and tibias. These came from Shantungosaurs, Zhuchengceratops' which belong to the Ceratopsidae family, and giant sauropods like the Zhuchengtitan.

All of these dinosaurs belong to what is known as the Wangshi Group, a geological group that lived here between 65 and 100 million years ago. The bones at the Zhucheng excavation are so scattered that it is hard to figure out which are related and to which animal they would have belonged. It's a different story at the Zhucheng Dinosaur National Geopark though. There you can see an amazing pattern. The centrepiece of the park is a natural feature about 500 meters long and 26 meters deep called Dinosaur Gorge.On one side of the gorge, giant fossilized bones protrude from the rocks. It is as if you are walking through a giant ossuary. Almost all of the skulls point east and the tails west.

Some experts believe this tells the story of a massive dinosaur exodus, and that the creatures were fleeing from a destructive heatwave 65 million years ago, the results of a meteorite's impact when it crashed into the earth. Other researchers have speculated about a huge tsunami, saying that the broken bones and limbs must be the remains of skeletons shattered by the water's impact. In the end, no oil was never found in Zhucheng. Instead the locals now have one of the largest excavations of dinosaur bones in the world.

Taboo (I think that)

... we should be more critical about China's role in Africa

On the African continent, Chinese investors are buying up infrastructure on a massive scale. A plea for more criticism.

Should every one learn creative writing?

Yes! When I teach creative writing I don't teach students how to write. Writing is personal: I teach is to read critically and comprehensively. I teach people t...