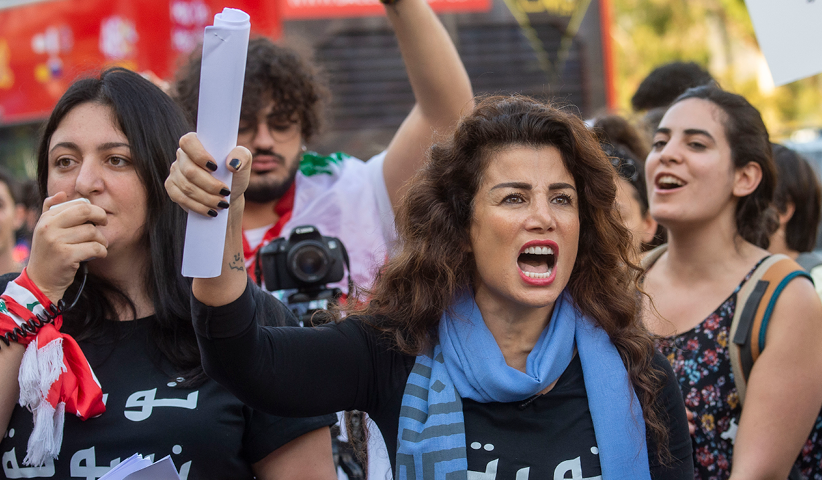 The author at a demonstration in Lebanon. Photo: Nabil Sleiman

Enough with the dumb blondes. With the Mummy martyrs. The efficient housewives. The abominable car drivers. The hysterical nanny goats. The brave daughters. With the ladies who need rescuing. With the amazing cooks. The poppers-out of babies. The stab-you-in-the-back-ers. With the poor, veiled Arab women. Away with the sensitive, talkative, watery women. The women on the rampage for marriage. The ticking timebombs with their oestrogen and uterus fuses. With the sexy PA. The sweet one who tidies up. The victim. The matriarch. The pink. Please, away with the pink. The barbies. It’s over. To hell with all these cliché and stereotypes smothering us.

From our very first steps it’s been expected of us women, in Lebanon and elsewhere, that we should think, live and even dream in a specific and circumscribed way. We’re relentlessly indoctrinated and bombarded with damaging demands, either invisible or too visible, looked upon rather than existing – objects instead of subjects. It’s like we were handed at birth a handbook entitled “How to be a Woman” whose instructions we have to follow. But what, in the end, is a woman? Who or what decides? Is it my having a vagina? My slightly larger hippocampus? My knack for talking about feelings?

Bottom line: we grow up poisoned. Poisoned by platitudes. By expectations. By patriarchy. By overt or hidden sexism. By our biological circumstances. And poisoned above all by a religious metaphor that reduces us to a seized rib, a constitutive part of the male. But the day has finally come when we’re angry. Angry enough to go out onto the streets, to protest against all these injustices and humiliations, instead of moaning in forums, private blah blah or social media chat.

Patriarchy hasn’t just wielded its malign influence in Lebanon. It has also wreaked massive and distorting harm on the self-perceptions of Lebanese women. This evil war against the self-worth of women isn’t just waged by macho men but also by women laid low by a methodical, centuries-old form of brainwashing. In concert with a cultural environment befouled by sexism, this all leads to women hating themselves, trampling their own dignity underfoot and ignoring their priceless intellectual and professional abilities. This sexist system – whose roots reach so far within us that it has become a part of our subconscious as women – is why, in spite of all the endeavours of feminism, for many women their external and sexual “attractiveness”, rather than their intelligence or talent, is seen by the male gaze as lying at the heart of their power and self-awareness. The sexist system is still to blame for turning women into exploitable and exploited objects. The sexist system is to blame for women accepting that domestic violence, sexual harassment and media-enabled bullying has such an appalling reach. The sexist system is to blame for mothers still prepared to give their 11- or 12-year-old daughters up for marriage.

Is it possible to escape from this lethal dead-end? It’s not just possible or simply “desirable”. It’s essential, and critical for survival. But how do we manage this? By standing up for ourselves, shouting, fighting. By not hiding behind a screen or a pseudonym. By crying out: this is our right and we’re taking it. By taking our energy from the solidarity of those women who stand beside us, who surround us, who came before us and who will follow us. In a world where living has become synonymous with functioning, it’s time to remind ourselves that we have to grasp our destiny in our own hands. We need to stand by our own decisions and our own bodies and not be pressed into the old moulds that constrain and define us. Only then can we begin to exist, and not one moment before.

I stand for standing up! And you?

Finally! (How I became me)

“My youth lay in ruins”

The Ukrainian cultural activist Diana Berg talks about her life and how protesting pro-Russian forces marked a turning point in her biography.