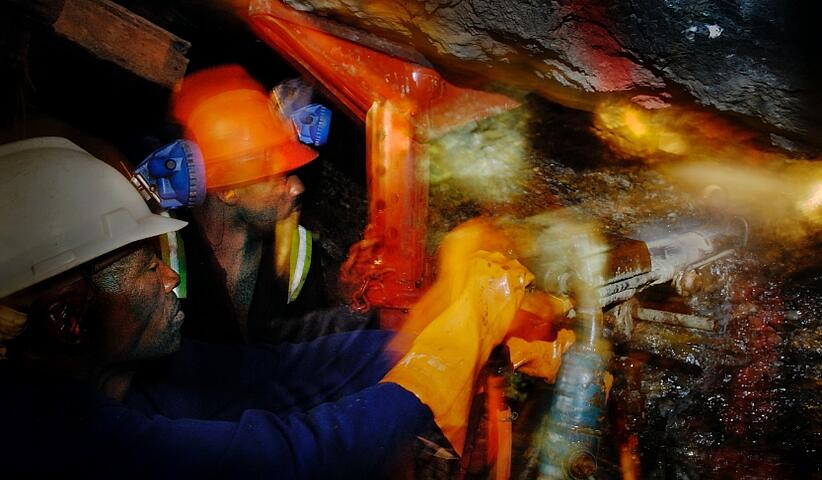 I wake up at 2am and begin my shift at Mponeng at around 5am every morning. Security is high at the mine and it has three turn-style gates. They want to protect themselves from illegal mining as well as stopping criminals stealing equipment, especially the powerful bombs we use. They also have to make sure that no one is still onsite when the massive explosions take place.

In the morning you first collect your lamp and our “self rescuer”, an emergency oxygen kit which fixes to your waist belt. At work I wear gumboots, overalls, and a hard hat, rescue pack and lamp. All together these are heavy but you can still move around.  At the entrance our cards are collected so that, in the event of problems, rescue teams will know who’s missing. We take the “catch” or lift. I go down to level 83, then walk to another station and get a catch to level 120. I work around one kilometre beneath the earth and I walk nearly three kilometres horizontally.

The mine is a noisy place: even ventilation and machinery is loud so we use hearing protection. All around us it is dark, except for where your light shines. Underground, somethings resemble life on the surface. For example, there are cars, bikes, hospitals. Being underground sometimes reminds me of neighbourhoods, each with its own structures and streets.

“ It’s hard to work somewhere where every single day you’re not sure if you are going to make it back.”

Even before I get to my section, I feel the heat. It is around 30 degrees and you need to carry lots of water. I work in a team of nine and we do the blasting, often crawling on our knees as there isn’t space to walk upright. It is risky underground, the ground can collapse, you can get dehydrated. There are injuries. I have never witnessed any one losing their life although it does happen. I first have to support the rock above me, often with stick supports. I've had plenty vulnerable moments but I know the different rocks and I have been trained. The professional in me somehow eases my fears.

We drill holes into rock to install bombs inside. Those are strong explosives, the same bombs that are sometimes stolen and used in transit hijackings. The bombs don’t go off until everyone has left underground. I sometimes feel the blasts from my house. We work for 11 hours. Then, arriving at the surface, they check you don't come back with any gold, which even takes the form of soil.

Personally I never wanted to be a miner. I did a qualification in human resources but ended up working underground because of the lack of jobs. This is my third year in mining. My father was a miner and my sister and my brother are also working in the mines.

I am happy to have secure employment but I’m working towards leaving the mines. You loose some of your fear over time but the anxiety is always there. It’s hard to work somewhere where every single day you’re not sure if you are going to make it back. Underground we are always praying:  “Please, please Lord just let us come back, just let us come back.”

A raft made from bamboo

How a traditional Chinese technique of building boats has won over tourists from around the globe.

I’m in favour of rethinking veganism

People go vegan for different reasons: because of animals, their health or the environment. Six years ago, I saw a documentary film about the direct connection ...

Under the Earth (Editorial)

What is going on under the earth