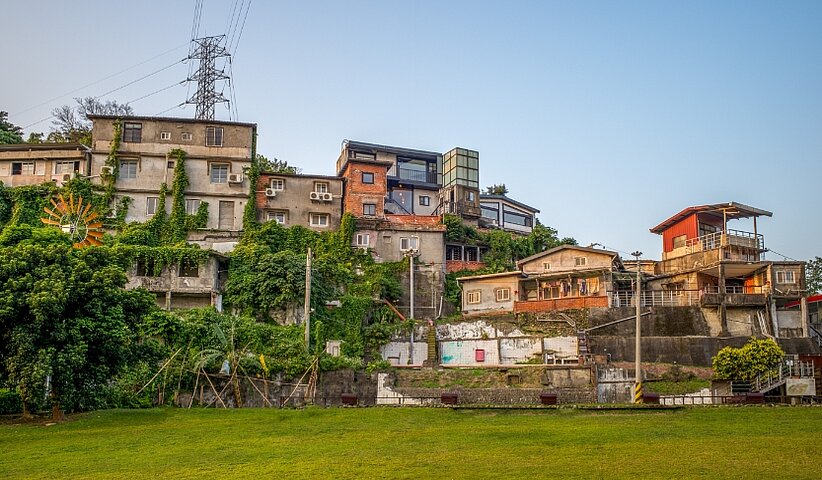 The slope leading up to Treasure Hill starts on a quiet Taipei riverbank. From there a settlement of narrow, concrete houses stretches upwards. From the distance, they look like grey cardboard boxes stacked, willy-nilly, on top of one another, as though they might all tumble down the hill any moment. Every year, the settlement becomes home to 20 international artists at a time, all of whom spend a three-month residency at Treasure Hill. Last year, one of them was Petr Danda, a Czech "space and sound" architect, whose work connects architecture with art. “I wanted to get away from conventional architecture,” Danda explained. “So I applied for this residency in order to find a space where I could experiment.”

The experiment he's talking about results in a room to tantalise the senses, set up especially for acoustics. It is open for the last month of Danda's residency here and will feature both lectures and music. While the events in Danda's room are well attended, the Czech architect says he really missed personal exchanges with other artists during his stay. “Thanks to the pandemic, it was a bit lonely, to be honest,” he explained. “There were only two international artists in residence here in 2021, which is a lot less than usual.”

During  a normal year, there are international artists from all sorts of disciplines in the studios. Half of them apply directly for a residency and the others come as part of exchange programs with international art foundations, the program's director, Catherine Lee, explains. Additionally there are 15 ateliers reserved for Taiwanese craftspeople.

The artists' village is funded by the city authorities and offers artists free accommodation as well as covering some of the costs of materials. There's also a really unique atmosphere, Danda adds. “Treasure Hill is an old housing estate that include some illegally-built huts from the 20th century,” he explains. “It was an interesting experience to live there because there are no wide roads or cars. You feel like you're in a mountain village.”

“When you walk around Treasure Hill, you meet these old fellows who just sit and drink tea and will make conversation with visitors. That's just their everyday life.”

But this mountain village sits in the middle of a metropolis populated by millions, and one with a fascinating history. For a long time, the hill was used as a military base and that is why nobody was allowed here for years. But as Taiwan's economy grew and drew increasing numbers to the city in the 1960s, space was needed; workers and soldiers began to live here in rudimentary, self-built huts. But because these were not properly constructed they were at the mercy of floods and typhoons and were always being damaged.

That is why in the 1990s, the city authorities were considering whether they should just clear the hill completely. Instead of that though, the artists' village was established. And international artists have been residing here, alongside about 50 of the original occupants of the restored neighbourhood, since 2010. Program director Lee really appreciates this combination. “When you walk around Treasure Hill, you meet these old fellows who just sit and drink tea and will make conversation with visitors,” she says. “That's just their everyday life.” The visitors they chat with include tourists or Taiwanese on an excursion, who roam the narrow alleyways, visit the various ateliers and take pictures of the picturesque lanes, art and nature.

During the COVID-19 pandemic, there was a lot of talk about establishing virtual residencies for artists. But Lee is absolutely certain that Treasure Hill can't be replaced by any online offering. “People still want to experience genuine, personal exchanges,” she concludes. “They want to see other people, they want to experience the city.”

There's a lot of money-making natural gas under the ground in the US state of Pennsylvania. To access it, fracking is used. But the widespread drilling is damaging the environment and dividing the community.

“Ancient forces are at work”

in conversation with Antony Gormley

The British sculptor Antony Gormley has been exploring caves since childhood. A conversation about fantasy, fears and the traces of our ancestors that he has encountered underground.

In her debut novel, author Kayo Mpoyi digs deep into her own family history.