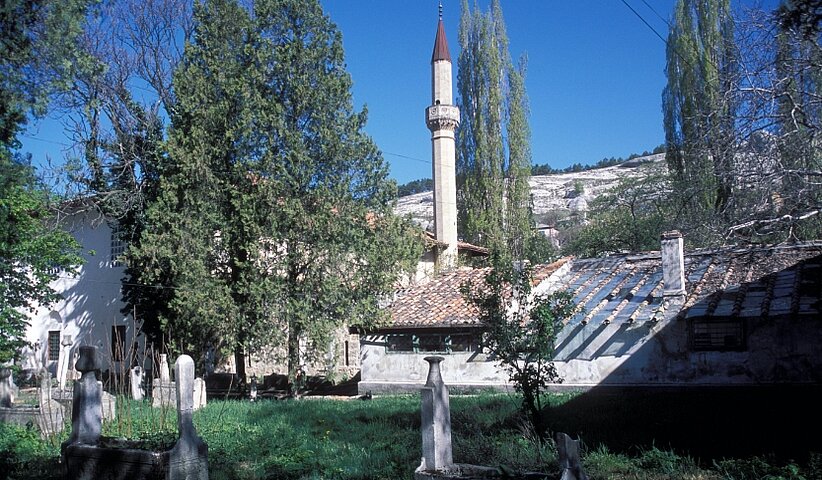 Russia has occupied the Crimean peninsula for more than seven years. Time and again, its rights and freedoms have been violated. Crimean minorities’ religious practices, education and cultural independence are all being infringed. Ukrainian websites are blocked and Russian mass media override the frequencies of Ukrainian stations. Meanwhile, illegal construction is happening in its historical parks, mansions and palaces.

All of this is part of a systematic Russian policy to rewrite the country's cultural and historical narrative. Alim Aliyev, the deputy secretary general of the Ukrainian Institute in Kiev, refers to this tactic as “the third Russian colonisation of Crimea within 300 years”. He says the first colonisation was at the hands of Tsarist Russia, the second was when Stalin had the Crimeans deported in 1944, and “the third began with Russia's occupation of Crimea”. In the process, historical events have been reinterpreted: “They want to create an artificial identity - that of a 'Crimean people', based on the concept of the 'great Soviet people'”. According to Aliyev, this new designation is intended to displace the Crimean Tatar and Ukrainian identities.

To achieve its aim, Russia is intervening in Crimea's cultural life. According to a UNESCO report of 10 September 2021, the Russian Federation has appropriated a large number of Ukrainian cultural assets. These include 4,095 historical monuments on the territory of the Autonomous Republic of Crimea alone. Some of the illegally acquired cultural assets are now on display in Russian museums.

This is linked to the reinterpretation of Crimea's history, as shown by the example of the Tauri Chersonesos near Sevastopol. The listed remains of this city-state date back to antiquity and the Byzantine period. In 2013, Chersonesos and its surroundings were included in the UNESCO World Heritage List. In the meantime, however, Russia has officially claimed the monument site for itself and carted off its most valuable exhibits. UNESCO refused to recognise this step but has not stopped Moscow from gradually taking over the site.

“Many monuments are destroyed because they are not restored by the Russian administration.”

While the Tauric Chersonesos was still regarded as a millennia-old monument to several cultures before the Russian takeover, it is now glorified as the “cradle of Russian Orthodoxy” and the place where the Kiev Prince Vladimir received baptism from Byzantium and thus, according to legend, introduced Christianity to Russia. The justification for this new narrative: in the 19th century, an Orthodox church was built on the territory of the city-state.

A fate similar to that of Tauric Chersonesos has also befallen the Khan's Palace in the city of Bakhchysaraj. While tourist tours there once focused on the history of the Crimean Tatars, the main attraction now is the Fountain of Tears, which the Russian national poet Alexander Pushkin once described in his poem “The Fountain of Bakhchysaraj”. At the same time, a large part of the palace, which served as the residence of the Crimean rulers between the 16th and 18th centuries, is slowly being destroyed because - like many other monuments - it is either not being restored at all by the Russian administration or is being restored in an inappropriate way: The authentic roof tiles have been replaced with modern materials, historical decorative elements of the building have been damaged and the wooden water pipes are to be replaced.

Distortions like these also have consequences for those employed in Crimea. Wherever Moscow interferes, a conspicuously large number of academic staff lose their jobs or are forced to take up new ones. As Evelina Kravchenko from the Archaeological Institute of the National Academy of Sciences of Ukraine in Kiev reports, they either move to other areas or are transferred to the Archaeological Institute of Crimea, which is part of the Russian Academy of Sciences. This institution, however, does not focus on the protection of the cultural heritage of Crimea, but rather concentrates on new excavations. As a direct result, excavations are currently being carried out at numerous sites in the Crimea. Regulations for the protection of area monuments are often disregarded during these excavations and the use of heavy equipment damages the soil layers. Recently, numerous historical settlements and Islamic burial sites were discovered and partially destroyed during the construction of a motorway promoted by the Kremlin.

“In fact, most of these researchers continue to try to prevent Crimea’s current situation from being recognised by the world community.”

However, the findings of Ukrainian archaeologists and experts are useful for the new excavations. As a result, Evelina Kravchenko says that Russia offers them to “sell” the results of their earlier work. In return, they get co-authorship of a Russian research paper or the offer to republish old research results in Russia. This is intended to create the impression that Ukrainian researchers approve of the Russian administration's actions.

In fact, most of these researchers continue to try to prevent Crimea’s current situation from being recognised by the world community. And the Ukrainian authorities continue to sound the alarm every time Moscow takes further cultural assets from Crimea. In 2016, for example, the Ukrainian Ministry of Culture protested loudly when a total of 38 works by the Crimean-born painter Ivan Aivazovsky were brought to the Tretyakov Gallery in Moscow for an anniversary exhibition.

Meanwhile, the fate of the Scythian gold remains wide open. The Ukraine is demanding the return of several hundred exhibits, as these objects belong to the Ukrainian state, but four museums in the Crimea, which are now under Russian administration, are also claiming the objects for themselves. The exhibits were made available from their collection for an exhibition at the Allard Pierson Museum in Amsterdam in 2014. According to the decision of an Amsterdam court on 26 October 2021, the exhibits must be returned to Ukraine. However, the museums in Crimea have until the end of January to appeal the ruling. By then, however, the legal dispute could be a moot point: The renewed Russian sabre-rattling on the Ukrainian border could well have turned into an open conflict by the beginning of 2022.

The root bridges of Nongsohphan

Any wooden bridge would quickly rot in the damp north Indian jungle. That's why, for hundreds of years, locals have simply grown bridges out of the trees.

Are we running out of water? (World report)

UNESCO's World Heritage Convention turns 50 this year. There's plenty of cause for celebration but also for concern amid loud calls for reform.