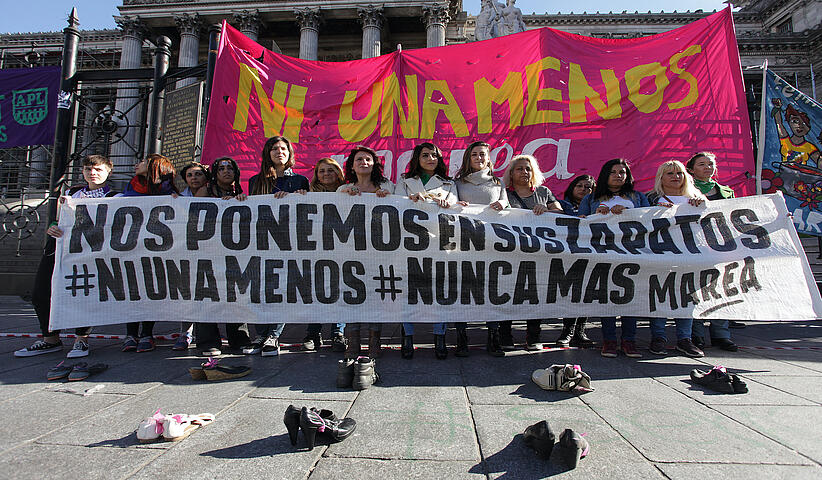 Gathering under the slogan ”Ni Una Menos”, thousands of women protested against gender-based violence and femicide in mass rallies across many Argentinian cities on 3 June 2019. Photo: Carol Smiljan/NurPhoto via Getty Images

For decades, women in Latin America and other regions of the “global south” have played a leading role in societal conflicts. A good example of this is in Argentina, where in the 1970s the “Mothers of Plaza de Mayo” banded together to find traces of the children who had disappeared during the 1976-83 military dictatorship. Women are also playing a crucial part in more recent human rights movements. Many of these have been set up by women whose daughters and sons have been murdered by powerful men. One of the first cases of this kind was the murder of María Soledad Morales who, in the northern Argentinian province of Catamarca, was brutally killed in 1990 and whose murder was covered up by the police.

It’s also quite probable that Argentinian protest movements against unemployment also wouldn’t have existed if women hadn’t been taking to the streets since 1996 to block traffic and so protest against hunger and lack of jobs. And in the current battles against huge mining operations, fracking or the effects of pesticides, women are still the most important protagonists.

The women’s movement with the most far-reaching national and international ripples is one that arose from the “Ni una menos” (“Not one less”) campaign. This was initiated by female journalists, activists and artists who were protesting against the growing numbers of women being murdered in Argentina. A manifesto drawn up by one of them starts: “In 2008 a woman was killed every 40 hours; in 2014 it was one every 30 hours. In these seven years, media reporting has covered more than 1,808 murders of women. How many women will be killed in 2015, just for being women? We don’t know. But we do know that we have to say ‘Stop’.”

The effect was huge. At the time of the first demonstration on June 3rd 2015, 200,000 women came together in different towns across the country. The hashtag #Niunamenos spread like wildfire and became a symbol for the fight against gender-based violence. As an umbrella collective that comprised many smaller ones, “Ni una menos” members organised gatherings that produced manifestos and campaigns for action – with strikes and mass protests to coincide with International Women’s Day on March 8th, as well as performances. The first action campaign took place in March 2015, when woman writers, activists, scientists and journalists staged a marathon series of readings in front of the National Library on the theme of femicide.

It’s crucial to point out that there were many currents to this feminist stream. One comprised the pioneers who had been battling for decades to secure more rights, including the right to abortion, and opposing violence against women – for years, it was only the civil organisation “Casa del Encuentro” (“Meeting House”) that drew up a register of cases of violence against women across the country. It wasn’t until 2015 that Argentina’s highest court finally took on the task of compiling statistics on femicide. Another current comes from Argentina being one of the few nations where participants of all ages and levels of society come together once a year for a national women’s conference. Since 1986 this has taken place in a different town every year and culminates in a large demonstration. From 2019 the demands of indigenous women have also been addressed to acknowledge their specific concerns.

“Ni una menos” has enabled young urban women from 12 to 20 years of age to connect with the women’s movement. They have fought for legislation that proposes legal and free abortion, which Argentina’s Congress decided on in 2018. The legislative proposal aimed to tackle abortion as a public health issue and to discuss the consequences of secret terminations. Women from poorer backgrounds especially were viewed as often being forced into terminating their pregnancies in precarious circumstances. Despite the Senate throwing out the legislation, the wide-ranging debate around the issue showed that feminist thinking had reached the heart of society. There were mass demonstrations, known as “pañuelazos”. The feminists adopted the “pañuelo verde” – a green neckcloth – as a symbol for their support for a woman’s right to choose. Scientists like the anthropologist Rita Segato, as well as a host of writers, spoke in support of the abortion legislation and became popular figures. The new feminist thinking was also taken up in neighbouring countries: the collective “Lastesis”, from Valparaíso in Chile, carried out a participatory performance piece called “Un violador en tu camino” (“A rapist on your path”), with choreographed women reciting a text while wearing blindfolds. The text explained feminist theories in a straightforward way, while at the same time showing how victims of gender-based violence are often held to be culpable for it. This performance was emulated in cities around the world – in Paris, Sydney, New York and Istanbul – and the words became a canonical feminist text. Actions from feminist movements also triggered countermeasures from ultra-conservative forces. Evangelical wings of the Roman Catholic church and supporters of the Pope, wearing light-blue neckcloths, in turn protested against the women’s demands.

The struggle to legalise abortion has resulted in Argentina’s feminist movement assuming a novel power in society. Today’s young women find it intolerable that the ones making decisions about a woman’s fate are mostly male, white, straight and over 60. They are hypercritical and ready to shake off the values that older women are still internalising. But we’re simultaneously living (or dying) through the worst wave of femicide in Latin America’s history. The challenging of male dominance is accompanied by a demand to make your own decisions about your own body. The capacity to understand and empathise with other points of view is tied in with the value of feelings and sisterhood. The value of caring for one another also depends on the defending of public domains and on functioning ecosystems. All the indications are that the new feminist movement hasn’t just come to endure, but also to broaden its demands. Because the themes that inspire it don’t just relate to the empowerment and liberation of women, but the whole of humanity.

Translated from the Spanish by Laura Haber

The hunters and the hunted (World Report)

Under the hashtag #MilkTeaAlliance, more and more people in Southeast Asia are rising up against autocracy and censorship. What’s behind the online movement?

Thoughts about the long conflict between Israel and Palestine

Veiled against the baddies

A duo of new books on feminism: Cinzia Arruzza, Tithi Bhattacharya and Nancy Fraser have written a manifesto against predatory capitalism while Kristen R. Ghodsee explores gender relations under socialism.

The unresolved conflict between Catalonia and Spain, and how a democratic state reacts to the desire for a people’s vote – a visit to Barcelona.