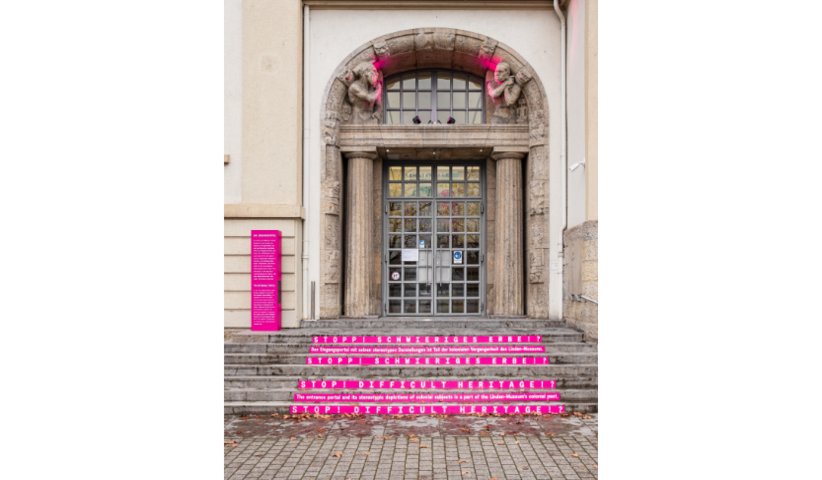 One of the biggest ethnography museums in Europe is facing up to its colonial past. How exactly is it going about it?

Recently, the phrase “Stop! Difficult legacy!” has appeared on the steps to the entrance of the Linden Museum in Stuttgart. An information board explains that even the entrance to the museum is a symbol of Germany’s colonial past. Hewn in stone above the portico is a clichéd depiction of two figures, presumably African and New Guinean, with broad noses and exaggerated lips. They are lit up by a pink beam, literally putting a spotlight on the building’s colonial past.

Under the direction of Inés de Castro, the Linden Museum has already been critically assessing its past for several years now. In this respect, its new exhibition is an important step and does not even stop at its namesake, Karl Graf von Linden (1838-1910), who managed the museum’s fortunes during the German colonial era and whose name was given to the new building on Hegelplatz in 1911. His activities have since been questioned in the workshop exhibition, in particular, his “collection” of many thousands of objects from colonial Germany and its “protectorates”. Next to his portrait, the museum poses critical questions: Did he receive stolen goods? Was he a thief?  A conservator? A patron of science? A wrecker of cultural artefacts?

With this fresh outlook, the Linden Museum traces a path back through its own past but also the urban and rural history of postcolonial issues. In doing so, it contributes to the field of provenance research which is still in its infancy in Germany. The exhibition reviews fascinating biographies and the organisation of colonialism from the German Empire to National Socialism is put on display.

“For the first time in this form, the sinister chapter of ethnographic shows, which reached their heyday between 1870 and 1940, is presented with a focus on Stuttgart.”

The section on “Colonialism and Violence” takes a look at the Boxer Rebellion in the German protectorate of China, in which hundreds of soldiers from Wurttemberg took part. The module “Everyday Culture” expands the visitor’s view of the phenomena of colonialism in everyday situations. For example, the exhibition is a reminder that the first major ethnography show – or “people’s zoo” – took place in Stuttgart in 1928 after the First World War, drawing a public of 200,000 people. For the first time in this form, the sinister chapter of ethnographic shows, which reached their heyday between 1870 and 1940, is presented with a focus on Stuttgart. On a record day in 1894, 28,000 people flocked to see the “Dinka Ethnography Show”, to look at people displayed like animals in a zoo. Pejorative attributions and racist and sexist terms have been masked to prevent their further usage.

The exhibition is also much more than just a documentation of historical material because it spans an arc to present-day racism. Visitors are repeatedly challenged to ask themselves questions and examine language and imagery. This includes the question of which name and purpose the museum should have in future. An exhibition might therefore set off a process of coming to terms with Germany’s colonial past and, in doing so, provide a role model for other museums and institutions.

For centuries, Māori in New Zealand have practiced the art of
tā moko, an indigenous tattooing practice. It goes far beyond simply decorating skin

About the Kasada ritual on the Indonesian island of Java

The new Poland (In Europe)

There is currently an appeal stuck to the windows of a Tokyo hospital that sums it up: “The medical system is on the brink of collapse! For God’s sake, cancel t...

An alphabet with 32 letters, tongue twisters and infinitely long words: a crash course on the pitfalls of the Polish language