White smoke on the horizon 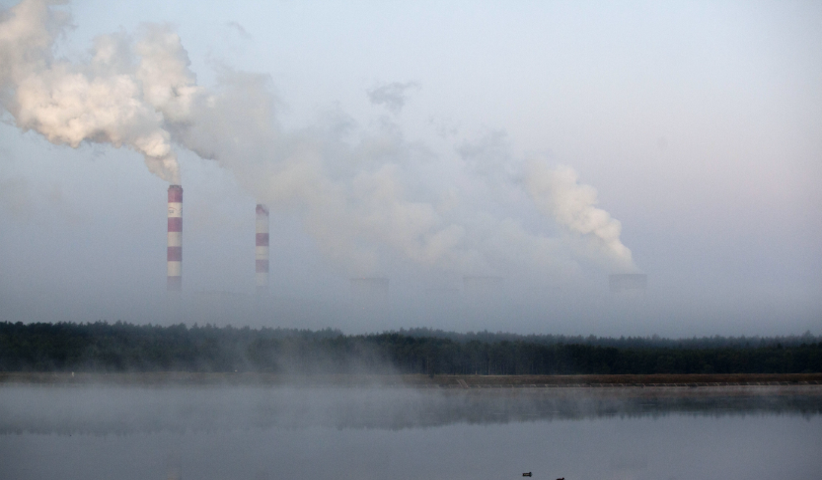 The world’s biggest brown-coal power station is in Poland. That’s not the only reason the Warsaw government is finding it hard to kick-start an energy transition

You can see the Bełchatów power plant from a long way off. Two gigantic chimneys rear up from central Poland’s flat horizon, churning out continuous white smoke. This is the country’s largest power station. It’s also the biggest brown-coal power station in the world. 43 million tonnes of brown coal are burned here every year, fuelling 22% of Poland’s energy demands. This also makes the plant Europe’s greatest source of CO2 emissions: 30 million tonnes of carbon dioxide were discharged into the atmosphere in 2020.

The plant, 50 kilometres from Łódź, is fired by brown coal from two nearby open-cast mines, one of which sits right next to the site. It’s twelve kilometres long, three kilometres wide and 200 metres deep, earning it the nickname “Europe’s Biggest Hole”. The open-cast mine and power station are the largest employers in the municipality of Bełchatów and a dozen neighbouring towns. The station alone employs 8,000 people, but many more jobs are connected to these huge companies. Although the enterprise is still operating at full capacity, the EU’s goals for limiting greenhouse gas emissions are likely to cause problems. And if there’s no political decision to phase out Bełchatów, then it will come to an end anyway – when the coal deposits run out. The prognosis is that one of the two deposits will be exhausted by next year, the other by 2035.

There have been discussions for years about developing a third surface mining operation in the Złoczew area, but that will almost certainly never happen. “The deposit lies 60 kilometres away from the power station, and transporting such huge amounts over that distance wouldn’t be economical,” says Maciej Kozakiewicz, an expert in regional development. Because of these logistic challenges, the construction of a new power station next to the planned new open-cast mine was considered. “That would’ve cost over ten billion złoty [€2.24 billion] and we would have had to take out a loan. But, due to climate policy, no bank nowadays would make funds available to build a coal-fired power station,” says Marek Józefiak from Greenpeace Poland. Poland is the only EU member state that has not committed itself to achieving climate neutrality by 2050. At the beginning of the year, the government passed a bill that set out a direction for the energy transition in Poland. With the title, Energy Policy in Poland, 2040, the paper declares that the decision about the Złoczew coal deposits should be made by an investor. In the text, Bełchatów is mentioned only once – as a potential site for a nuclear power station. The first issue leaves the dubious status quo unchanged, and no-one believes the second eventuality will come about. Alongside this, increasing costs for the right to emit CO2 could soon make power generation in Bełchatów unprofitable anyway.

“The power plant employees worry about their region’s future”

Those who work in the energy production plant, however, haven’t completely given up hope for a new source of raw material. “Of course we realise that transition to new forms of energy is needed, but it can’t be put in place so quickly,” says Bernard,* a worker at the power plant. More than safeguarding the power supply, workers are worried about the future of their region. “Without a new open-cast mine there won’t be as many jobs as there are now,” says Grzegorz,* who has worked in the mining industry for many years. He fears that Bełchatów will become a town of pensioners if young people move to other towns to escape unemployment. “The older ones will be doing this until they retire, but the thirtysomethings have no clarity whatsoever about whether there’ll still be jobs for them here in the future,” explains Aleksander,* who runs a firm that repairs excavators.

Representatives of the state-owned energy concern PGE (Polska Grupa Energetyczna, or Polish Energy Group) that manages the power station and open-cast mining operation, explain to reporters that developing a further surface mine is not part of the business strategy over the coming years. An official decision, however, has yet to be taken. A decision on the future of a third surface mining operation in Złoczew will probably be made by the National Energy Security Agency, an institution that doesn’t yet exist, but which the Polish government wants to set up to manage its coal economy. What can be expected from this body? “It will make the PGE energy concern into a green business. If it divests its portfolio of coal, it can get EU funding and bank loans to invest in ‘green energy’. And the newly established agency is then where coal-fired power stations go to die,” explains the environmental activist Józefiak.

That could mean that the power station will continue to operate until the deposits of brown coal in the existing open-cast mine are exhausted in the mid-2030s. At the moment what’s certain is that there is no concrete plan to phase out coal production in Bełchatów. Meaning that the region could miss out on its chance to access EU funding programmes worth millions. The European Commission is currently working on a mechanism that should make financial help available for regions at risk from the consequences of transitioning to a green economy. The Poles are supposed to receive €4.4 billion to invest in making it easier to phase out coal. €760 million could flow just into this area. But the problem is that the funds are earmarked for regions that have already made the choice to phase out.

Plans for the energy transition in Bełchatów, however, are still in their infancy. The operating company PGE announced it would construct wind turbines and solar-power parks in the region over the coming years, at the same time assuring that by doing this they want to maintain employment. The current government, according to the regional development expert Maciej Kozakiewicz, has no interest in long-term planning. “They know that Bełchatów’s transformation won’t be a success story. Of course the government is promising that everything’s going fine but behind this slick PR, the only goal is to win the next election,” he says.

“Plans for the energy transition in Bełchatów are in their infancy”

Even though specific decisions to this end are still lacking, the region’s future appears to lie exclusively in moving away from coal. But this process can be painful for the local population when it is not buttressed by a plan for the creation of new jobs. This is pointed out by the authors of a report out this year on the future of the Bełchatów region, Alicja Dańkowska und Przemysław Sadura, entitled The Sleepy Revolution. Without targeted investment and engagement from the population in the transformation process, Bełchatów could face the same fate as the mining areas of northern England. After Margaret Thatcher’s government shut down the mines without accompanying welfare measures, a host of social problems emerged, from unemployment to intergenerational poverty and addiction.

Just as unhelpful is the fact that nowhere near the entire population of the region are aware of the looming crisis. Against the backdrop of an uncertain future, discussions about the climate take a back seat. “Of course we’re for the environment, and we think that changes are good, but we can hardly approve of a high-speed transformation that takes away our whole families’ livelihoods,” says Grzegorz,* a miner at the site.

The example of Bełchatów clearly shows the tensions that energy transition in Poland provokes. In a country most of whose energy requirements are provided by coal, these fault lines are unavoidable. However, they will not be lessened but rather exacerbated even more if the government dodges decisive action on reducing emissions. An abrupt departure from coal use would result in a significant increase in social discontent in many regions, not just in Bełchatów. And the risk of losing votes at the next election would be too great.

The new Poland (In Europe)

Holding hands as a threat

Why “LGBT ideology” is part of the government's fighting talk - and how people are resisting it.

Surviving Humanity: “What will the world look like when I grow up?”

a photo series by Alberto Giuliani

Demographic change, global warming or securing the world's food supply: we are facing a multitude of hurdles. What solutions will science dream up? A photographic survey.

How history contributes to the consolidation of a nation - and its division.

“I just had to take a stand”

an interview with Arshak Makichyan

It is a hard struggle to protest climate change in Russian capital, explains Arshak Makichyan.