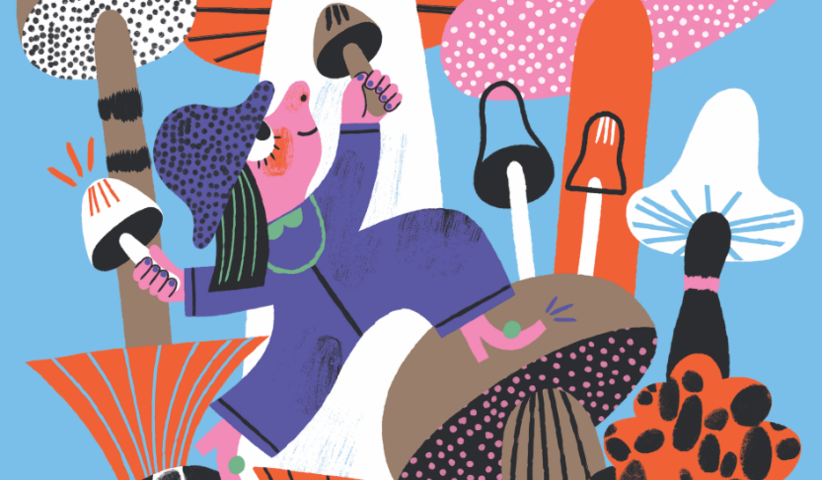 There are plenty of Polish food quirks that foreigners find surprising: eating dessert for our main meal, putting noodles in compotes and call it a fruit soup, sprinkling chopped dill with abandon – but for me classic Polish cuisine is foraging in the woods, fermenting and stocking up for winter, not to mention dumplings.

It’s often when we are young that we first go mushroom foraging, something which in Poland verges on a national sport. Of course, collecting and eating wild mushrooms is not without danger – a common joke when eating a foraged mushrooms meal is ‘Well, I hope we don’t all get food poisoning’. But in reality, mistakes happen very, very rarely.  It is not only a fondness for their umami-laden flavour that is passed down through the generations: We also learn what to pick and what to leave behind.

In the Autumn our forests teem with people searching for boletus and saffron milk caps, partly to cook and eat mushrooms, and partly just to spend time in nature. Yet even those who don’t get to the woods often buy dried boletus or pickled mushrooms to enjoy with cured meats and pâtés.

Drying mushrooms is one of an array of food-preservation techniques common here, including pickling and fermenting. Seasonality in general is not something we have to ‘relearn’ as in some Western nations - we never lost it in the first place. Most people here won’t buy raspberries and asparagus in the Polish supermarkets in December. We prefer to wait for the real thing, which we buy—in bulk—during the warmer months.

First young cabbages, new potatoes and strawberries arrive, then cherries, raspberries, cucumbers, tomatoes and fresh green fava beans (which we boil, season and snack on watching Netflix or football games). Later in the autumn we are inundated with plums, pumpkins and, obviously, mushrooms.

“Fermentation is the secret to the sourness of Polish cuisine which often takes visitors aback.”

It might surprise you how many Poles toil to preserve these rich tastes to enjoy during the winter. Berries, cherries and plums are preserved into jams or nalewki – delicious fruity liqueurs. We condense enormous amounts of fresh tomatoes in jars when they are the ripest – and the cheapest. Then we ferment cabbages and gherkins in brine. Fermentation is the secret to the sourness of Polish cuisine which often takes visitors aback. Just take bigos (sauerkraut stew with various meats, mushrooms and prunes) or soured beetroot borsht, soured milk and even our beloved sourdough bread. Possibly the weirdest thing we do is ferment flour to make one of the most traditional Polish soups – żurek. Made with soured rye flour, garlic, horseradish, sausage, potatoes, and served with a hard-boiled egg, this hearty concoction is sometimes jokingly dubbed ‘Polish ramen’.

“I still remember fiddly pierogi pressed between my little fingers in my grandma’s kitchen, standing between cupboards lined with jars of home-pickled gherkins.”

Combining sauerkraut and dried wild mushrooms is a match made in heaven, and is a popular filling for savoury pastries, crêpes and dumplings, not least our internationally famous pierogi. I still remember fiddly pierogi pressed between my little fingers in my grandma’s kitchen, standing between cupboards lined with jars of home-pickled gherkins. Today, these time-consuming packages are rarely made in family kitchens but remain popular ready made in bars or delis. Filled with potatoes and twaróg farmer’s cheese or with boiled ground meat or spinach they are an every-day snack. In summer they come berry-filled and are a delicacy while on Christmas Eve dish they are served packed with sauerkraut and mushroom. As with all Polish food, seasonality is king.

White smoke on the horizon

The world’s biggest brown-coal power station is in Poland. That’s not the only reason the Warsaw government is finding it hard to kick-start an energy transition

in conversation with Daniel Libeskind

The New York architect spent his childhood in Lodz and later became world-famous with buildings like the Jewish Museum in Berlin. In an interview, he talks about his ties to his homeland and how Polish architecture deals with the country's history.

In Chile, a democratically elected assembly is drawing up a new constitution but it remains unclear if it will work out. A snapshot of a country at the crossroads.

Poland's relationship with its eastern neighbours is complicated - especially with its big brother Russia.