“Uganda produces 2.4 billion litres of of milk a year”

In conversation with Paul Ssuna 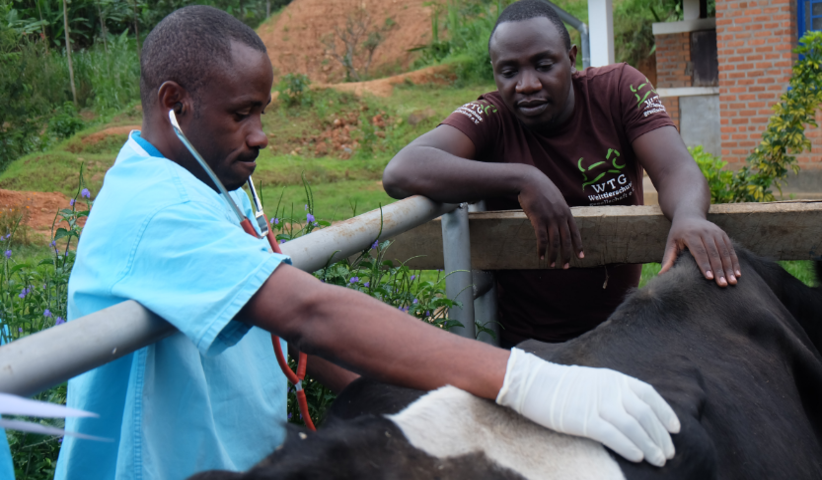 The vet Paul Ssuna explains why booming agriculture in his homeland has encouraged factory farming and how it impacts animal welfare. A conversation.

Mr Ssuna, you work for Vets United, a programme for the international animal protection, what does the organisation do exactly?

Our main objective is to contact students of veterinary medicine, animal production and wildlife health and management and teach them both theory and practice on animal welfare. We show the universities how animal welfare modules can be improved, how lectures can be given and how it can work in practice.

Trained vets are in high demand in Uganda, as agriculture is booming. Why is that?

Agriculture has been the backbone for most of the African economies. More than 70 percent of this is livestock production, which is an important livelihood source for most of the African communities. The government is increasing investment in agriculture and technologies, realising the great potential of the agriculture business. More than 300 million people in Africa now have the privilege of consuming animal-based food. In Uganda we produced less than half a billion of litres of milk before 2016. In 2016 this rose to 1.6 billion litres and by 2019 we were at 2.4 billion litres.

What problems arise from this increase in livestock production?

As people focus more on the benefit from the animals, they tend to neglect fulfilling the needs of the animals. Those people who used to keep five animals on one acre of land now want to keep a hundred in the same space. We used to have farmers keeping free-range chickens, but as interest in profit grows, increasing numbers put chickens in cages, which negatively affects the health and welfare of the animals.

In particular, the younger generation has rediscovered agriculture. Why?

In Uganda we have 80 percent of people doing livestock farming on a small scale, keeping animals on their own land. Often children and young adults are a source of labour on these small farms, and they grow up with animals and learn how the business runs. When they grow up and later have their own acre and are able to access loans from government, they tend to be inclined towards agriculture.

You are 28-years old. What sparked your interest in animal welfare?

I come from a family where we always had animals at home. We had two cows and one goat. We used to take care of these animals throughout my childhood. I also have an uncle who was a veterinarian. I used to move around with him as he was attending animals in the community. I developed an interest in understanding animals. I later went to university to study veterinary medicine and there made contact with the Universities’ Federation for Animal Welfare (UFAW). Through this league we came up with a Students’ Club and we would go out to the communities, giving vaccinations to animals.

Is the younger generation more open to the topic of animal welfare?

Yes, they are much more open. I have a number of colleagues, in the Ministry of Agriculture of Uganda, for example, and when we discuss policies and reforms, they are very receptive. There is a growing passion for animal welfare, for ensuring that animal needs are met. In the next couple of years, we will have a larger population expressing this interest. Also, we have several NGOs that have reached out to schools and universities via several programs. So the message has traveled far and wide.

You want to grow the agricultural sector in Africa sustainably. How would you say you can achieve that goal?

First we need scientific evidence. When I say that animals are suffering it sounds like an official advert but if we are able to do research, carry out investigations, then we can lobby government, policymakers, or whoever else is a stakeholder, to discuss the subject with them, and then we can make improvements. We also need to have guidelines that will be followed by, for example, on the farm. As well as these guidelines, we need an enforcement strategy.

What changes do we need and how can we persuade farmers to adopt them?

Something that has worked for me is to engage the farmer actively. Of course, when I go there and tell them, as a practising veterinarian, to improve housing, to clean the house regularly, they will do nothing about it. So what I realised from my experience is that once you work with them, eat together with them, the next time, you will find they have improved and they have taken up what you told them. So it is, how should I say, a more participatory approach that has really worked for most of the farmers I have been to. There are other factors like the social environment of the farmers, traditions or group dynamics.

Do you have any example of this happening?

Farmers in Western Uganda often do not allow a calf access to its mother. I have told farmers there that it is important in several ways, explaining that the calf is much healthier when you allow it time with its mother. Over time I realised that they were doing this because the neighbours were also taking this approach - there was a social influence. So, when you ask them to change, they say: “when my neighbours change. Then, I will also change” or “my grandparents have been doing that, and we have had animals for all this time, so why should I change?”

You recently finished your Masters in Scotland. What do you think of Europe when it comes to animal welfare?

I see Europe as a very good role model. We also need to benchmark a number of initiatives that were taken in Europe to increase welfare and come up with initiatives of our own here in Africa. We cannot copy-and-paste what was done there, because the context is different. Europe started animal welfare after factory farming started, but here are both starting up at the same time.

Has farming in Uganda been affected by COVID-19?

During the peak of the pandemic here, we had a lockdown. It wasn’t a total lockdown, and agriculture was among the exceptions. People were still allowed to go to their farms, carry on growing crops, raising animals, all to ensure the supply of food was constant. This was a priority for our country and also for our neighbours, like the DRC, Democratic Republic of Congo, and Rwanda who depend on us for most of their food.

Earth, how are you doing? (In Europe)

Many people who fled to central and northern Europe were left stranded in Croatia - only to be deported. Five biographies.

A story goes around the world (chapter 6 of 8)

During the lockdown we asked eight international authors to write a story together. Chapter 6.

A story goes around the world (In Europe)

Barack Obama's former environmental advisor is building a high-tech village in the Netherlands.

"That's a pretty boy" or "I have a great new job" are sentences which are rarely heard in Egypt for fear that they spark envy and the evil eye.

Learning from the polar bear

About a special animal in Greenland.