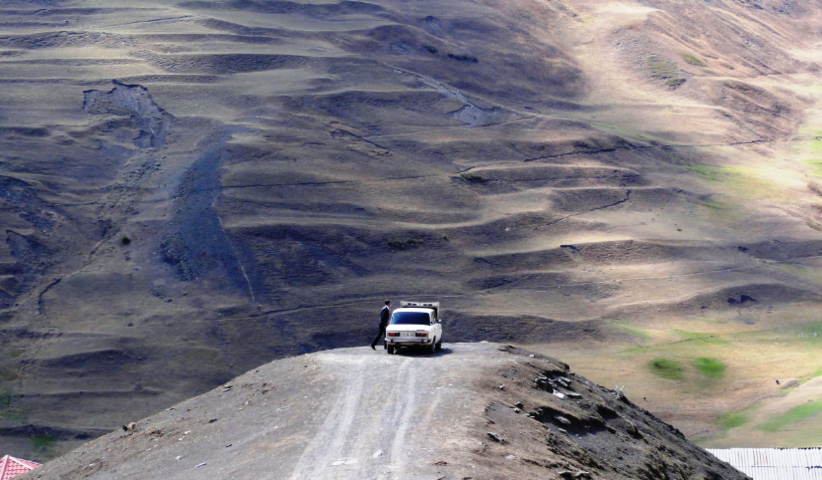 In the mountains of Azerbaijan. Photo: Noémi Kiss

A few years ago I was in the mountains. This time round I didn’t opt for Georgia or Armenia, but the richest oil-producing country in the region, Azerbaijan. The capital, Baku, is lined with Ferrari and Porsche storefronts decorated with snow-white stucco and gold inlay, but I leave behind the surreal wealth and the salt cloud of the drying Caspian Sea and head for the hidden mountain villages in the north of the country, places that have a long and fascinating past.

This other Azerbaijani world is not only “unspoilt”, it also gets under your skin. At an altitude of 2,350 metres, I find myself in Xınalıq, in the Azerbaijani Caucasus. Together with a small group, I stay in a guesthouse in the village. Our host is extremely polite, awaiting us with dinner and providing us with a guide. The guide is his son, a student. In most families, weapons hang on the wall in the living room, on the tapestry behind the tea samovar. Our hosts are exceptionally friendly, sincere, frank and hard-working people. We go upstairs and enter the living room. Feather beds, duvets, knotted and woven carpets are lined up metres high in the corner. Blankets are also stackedin one corner of the living room, and pictures hang above the piles. Pictures of dead soldiers, of fathers, grandfathers and sons. For thirty years, young soldiers have regularly been recruited from villages like Xınalıq for the war over Nagorno-Karabakh, the conflict that flares up again and again at the other end of the country - in the Armenian-Azerbaijani border region.

“The military parades are part of everyday life”

After we have introduced ourselves, we eat a dinner of lamb with the family. They offer some of our group space in the kitchen. For those who can't get a space there, the host and his wife set the table on the carpet in the living room. The children help by serving the food. I am lucky, there was no more room for me, so I eat in the living room. Before they bring in the soup and salad seasoned with coriander, we watch the news on TV. It starts with military news, Nagorno-Karabakh is shown. Although it is peaceful at the moment, the reporter emphasises the “increased state of readiness”. The military parades are part of everyday life. “It happens every day,” says our host, who tries to avoid giving overly political responses to our questions. The news switches to Baku, where a parade of soldiers is shown. “The next war will be the war of the drones,” the report says. Then medals are handed out.

I stare at the screen. When the news is over and our dinner arrives, either someone switches off the power or there is a blackout, I don't remember exactly. It goes pitch black. Silence. Our landlord switches on the battery lamp. I quickly take a few photos with his permission. The samovar and the weapons. Here, in the remotest mountain villages of Azerbaijan, this is the everyday, unfamiliar reality. The country is firmly in the grip of its totalitarian President Ilcham Aliyev. And even here, so far from the capital, the Armenian people are considered the greatest enemy.

“Being a soldier is considered noble here, a duty for which one can leave the mountains.”

In Soviet times, the remote village of Xınalıq was not accessible at all during the winter, and in the other seasons was only reached by travelling for several weeks. The winters here are harsh and cold, the summers hot. A few years ago, the villagers were still fire worshippers, followers of an ancient cult of Zoroastrianism who performed ritual prayers at fireplaces. They held on to their religion even though the region was sometimes dominated by Christianity, sometimes by the Muslim faith. Then came the Soviet ideology. The sacred sites of the fire worshippers are still clearly visible on the hill, built of stones between pastures and graves. The barren, stony mountain range is beautiful. Its rocky slopes are criss-crossed by the footpaths of nomadic herders leading to the peaks. Flocks of sheep and gallows can be seen on its heights, the blood of slaughtered animals trickling into a dug pit, the fresh meat covered with woven blankets. There are Ladas, old Soviet KAMAZ trucks and donkeys.

Some 2,000 people inhabit the village, and there are currently 380 houses, one for each family that lives up here. It is spectacular how the houses stick to the mountain. The buildings, which are constantly being repaired, arearound 200 to 300 years old. The people living here speak to us in Azerbaijani or Russian. There are many old people, Soviet veterans sit in front of the houses. Being a soldier is considered noble here, a duty for which one can leave the mountains.

Veterans sit in the teahouse. There is only one counter and next to it sits a lonely stove. Silence and peace has ever reigned here, no one would come up here, here even the fox and the hare say good night to each other, we are told. But that is no longer true; here, too, people are part of a bigger cycle, they get sent conscription orders from Baku. Often it is also the clans from the capital that encourage offspring from the mountains to move to the big urban housing estates and join the army, luring them with oil money and tales of modern life.

“But in reality, no one really believes that the war over Nagorno-Karabakh is over.”

A few months ago, when the world was absorbed in the pandemic, death tolls and the American presidential election, fierce clashes broke many miles away from Xınalıq. The Armenian-Azerbaijani border conflict flared up once again - with several thousand casualties among the soldiers and tens of thousands of Armenians forced to leave their homes. Nagorno-Karabakh was burning again, meaning that more young soldiers were needed from the mountain villages.

Today, the war is over, or rather, there is a ceasefire. Victory parades have been taking place in the Azerbaijani capital for months. At the beginning of November, Ilcham Aliyev, Vladimir Putin and Armenian Prime Minister Nikol Pashinyan signed an agreement to the end of the conflict in Nagorno-Karabakh. The result: the Armenians in Nagorno-Karabakh burned down their houses and cleared out their monasteries, leaving only stone walls, rocks, so that nothing would be left for the advancing Azerbaijanis. They set off with packed SUVs.

But in reality, no one really believes that the war over Nagorno-Karabakh is over. The region is a silent flashpoint full of suppressed emotions. In Armenia, the smouldering conflict is reminiscent of the Armenian genocide of 1915. Back then, too, the great powers did not intervene when a foreign power overran the country - there was no intervention, only declarations of intent. While the peace declaration of early November caused a severe political crisis in Armenia, Azerbaijan is basking in victory. The Nagorno-Karabakh Agreement puts an end to a hopeless war which pitted unequal sides against each other. Armenian-ruled Nagorno-Karabakh has to relinquish significant territories in favour of the victorious Azerbaijanis. But the prevailing insecurity remains.

In Nagorno-Karabakh, monasteries and mosques stand side by side. Television reports show the Armenian soldiers and local residents taking a last picture in front of the Dadivank monastery, an important spot for believers. Meanwhile, storm clouds are gathering. Everyone is preparing for a cold winter, the wind is whistling and icy. In the background, stone houses blaze, the curtains, the carpet, the old wooden stairs are on fire. The exodus begins. “We will return, either me or my sons. You know, not only Armenians love this mountain, the mountain also loves Armenians.”

The basis of white supremacy is a way of thinking, one that says the colour of one's skin makes one human being better or worse than other human beings. Even as a successful professional, the author was unable to escape it.

Modern technology makes it possible to measure and track wildlife better than ever before. James Cheshire and Oliver Uberti have published a book of beautiful maps based on this – but along the way, they seem to have lost sight of animal welfare.

The hunters and the hunted (How I became me)

In a strong voice

Auma Obama is a German scholar, sociologist, author - and Barack Obama's sister. She doesn't like to discuss her famous brother, preferring to talk about her life and her work between Germany and Kenya.