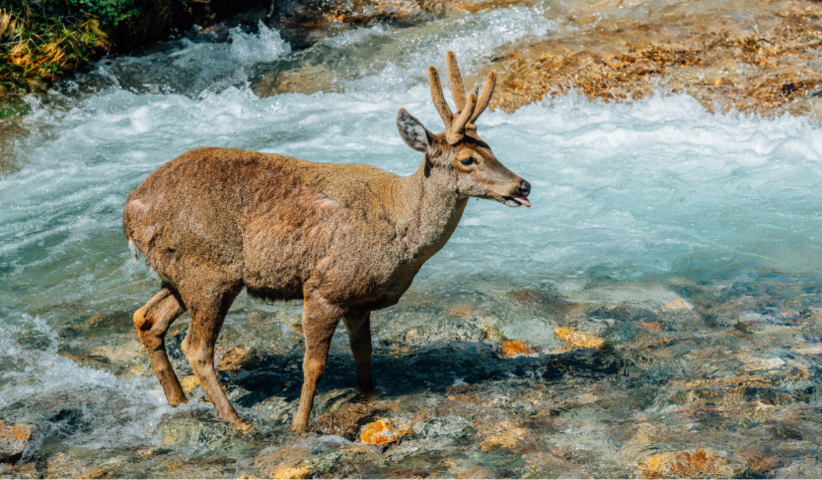 How do you study an almost unknown species of deer? And how can it be protected? A park ranger from Chile reports.

The first deer calf I found in the Cerro Huemules reserve was lying on the ground. Sometimes its mother came and suckled it. Other times she stayed at a distance of a hundred, two hundred metres. If she saw a predator, like a fox, she would try to lure it away. I had my instruments with me and was able to measure and weigh the cub. He weighed between five and six kilos. Like a newborn lamb, his legs were long and weak. He found it difficult to walk. After twenty metres it kept lying down - always perfectly camouflaged next to a bush or tree trunk.

I was overjoyed when I came across the young animal. For two years I watched this huemul deer, also known as South Andean deer. When he was nine months old, I could touch him if I stretched out my arm. He was very tame.

When I started working as a ranger in the Cerro Huemules Nature Reserve in southern Chile in the mid-1980s, we were just getting to know this species. There was already some data, but we had to check it was correct on topics like: when their antlers fell off? when do the young grow antlers for the first time? Does the reproductive period last seven or eight months? Little was known about the calves either. Stumbling on this first one I could observe how it suckled and later how it fed.

“But their main enemy is abandoned dogs. A simple dog bite leads to infections, the animal dies.”

The deer population in the Cerro Huemules reserve is not very large. In 2006 there were three or four huemul deer. In recent years, the number has risen to eight. Originally, the huemuls were distributed from Rancagua to the Región de Magallanes. Today, most of the deer live in the Región de Aysén. There are only said to be 2,000 Huemules left. In many places they are under increasing stress because humans are encroaching on the areas where the deer live. In the past, animals have also been poached time and again. But their main enemy is abandoned dogs. A simple dog bite leads to infections, the animal dies. I therefore changed my strategy: the huemuels should no longer be tame, but maintain a greater distance.

Today, I try not to interfere with their natural life and observe them from a far away. Huemuls are difficult to spot. They camouflage themselves well, especially on mountain slopes they can be overlooked because they can literally freeze. On hot days they stay in the undergrowth. It is easier to observe them early in the morning or at dusk when they are foraging.

“Not only their habitat, but also the natural corridors must be preserved so that the populations remain in contact.”

Their protection is a comprehensive task. We have to preserve the forest, the waters and all the animals that live in the reserve because they are part of the food chain. The huemuls are threatened because people have burned down the forests where they dwell. In the Región de Aysén, a large part of their habitat has now been built on so they need special protection. Not only their habitat, but also the natural corridors must be preserved so that the populations remain in contact. At Cerro Huemules, their main corridors are interrupted by settlements. If this continues, the deer population will disappear one day.

I work nine days at a time in the reserve and then have five days off. I have an office and a room where I display huemul bones and fur. Groups of pupils and students come regularly. For eight years I have also been working with kindergarten children aged two to three. For me, environmental education is fundamental: we should bring children closer to animals in their environment from an early age. Why do they tell them in kindergarten to draw giraffes, elephants and lions? Why don't they sketch the animals that live here?

As told to Timo Berger
Translated by Jess Smee

At home in the world

In Mahindra in India 240 students from 80 nations study together.

The lure of the mountains

a photo gallery by Florian Richter

Climbing higher in search of the last unspoilt natural spots.

Modern technology makes it possible to measure and track wildlife better than ever before. James Cheshire and Oliver Uberti have published a book of beautiful maps based on this – but along the way, they seem to have lost sight of animal welfare.