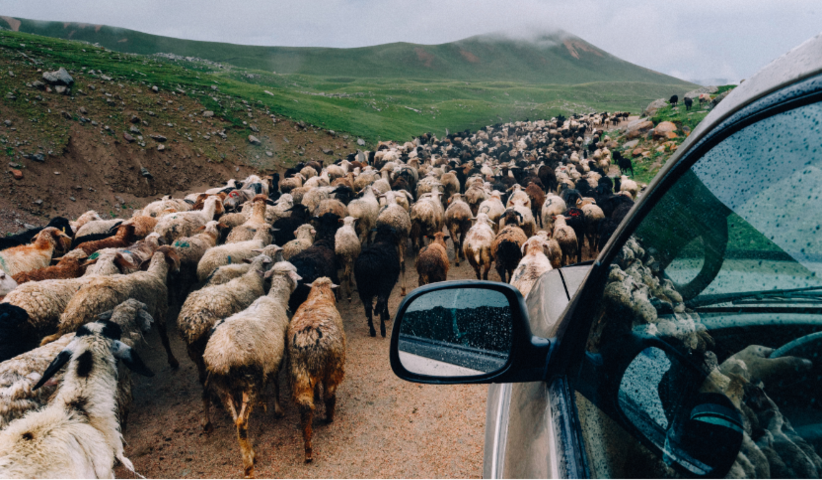 At the beginning of April every year we set off for the jailoo, the summer pasture. We take the horses, cows and sheep with us and head up to the mountains. We look for a place where the snow has melted and then we gradually move towards our house in the mountains until May. At the top there is still snow because the house is on the shady side. We used to have only one small hut on the mountain pasture. Later we built two houses out of sandstone, one for us and one for my son's family. We also built a big sooru, an open-air wooden base where we sit, lie down and eat.

I am 66 years old and was born and raised in the mountains. My ancestors kept cattle and moved from their villages to the jailoos in summer. In our village, children always help on the farm from an early age. The boys herd sheep or look after the other animals. The girls help in the kitchen. When they are about 15, the girls can clarify butter and cook food in the kazan, the big cauldron.

When I was a child, I moved to the jailoo with my mother. I learned to milk cows when I was ten or eleven years old and I helped my grandmothers. After I got married - I was 18 at the time - I started taking the animals up into the mountains with my own family.

Today, as an extended family, we usually go out to pasture with 10 to 15 people. My husband and I have a total of five sons, two daughters and thirty grandchildren. In August we return home, down to the village, and in September my husband follows with all the cattle.

“Only then did I understand the full meaning of the pasture: there is no gossip and dirty talk there, no television and no bad news.”

All my life I have gone up to the jailoo in the summer, but I don't think I realised the full glory of the mountains until last year. When the world was overtaken by a pandemic and we saw the news on TV about the rising numbers of infections, I almost lost my mind. Then my son Manas took me to the jailoo. Only then did I understand the full meaning of the pasture: there is no gossip and dirty talk there, no television and no bad news. You drink kumys, fermented mare's milk, in the fresh air and enjoy nature and silence. The jailoo helped me cope with my depression. My grandchildren, who get sick and lose weight in the city, recover on their own in the pasture, if only because of the clean air.

We used to resume our work immediately after the birth of a child. My son Kyias was twenty days old when we arrived at the top of jailoo. It was June and it suddenly snowed unexpectedly heavily. At that time there were no disposable nappies and no electricity. I had to wash and dry the cloth nappies by hand, my eldest daughter dried the nappies on herself and then put them on the baby. That's how we brought up the children. We did everything ourselves: milking cows, baking bread in the tandur, the clay oven, and doing the other chores around the house.

We eat mainly sheep meat, we slaughter our own sheep. Twice a day we cook a hot meal. But you can't say we eat a lot of meat. Often we save it up and feed ourselves for a fortnight on a single lamb. We don't usually slaughter cows. We extract their milk and wait for their calves. We sell bulls on the market. When it comes to our milk products, we first cover our own needs - and then sell what is left over, a good half, to our neighbours.

“During the summer, our animals change their coats, gain weight and grow.”

The days up on the jailoo have their own rhythm. We wake up at sunrise in the morning, around four or five in the summer. First we go to milk cows, then we make the fire. Then we separate the cream from the milk and only then do we wake the children. Together we have breakfast. We eat the cream, which we call kajmak, with ayran and bread. Then we clarify kajmak in the kazan, which makes clarified butter that can be stored for a long time. We make ayran from the leftover milk and use it to make kurut, a dried milk product in the form of salted sweets. These are supplies for the winter.

While the women prepare breakfast, the men drive the cattle through the jailoo in the morning. The summer pasture is vast, the calves are driven in one direction, the cows in the other. There is enough space for everyone. Then we milk the horses. We ferment the mare's milk into Kumys. The drink is very healthy. My mother used to say that if you drink Kumys and then go to sleep, you wake up younger. Our whole family has been spared the coronavirus. Kumys boosts the immune system and helps against viruses. Now we collect kumys and store it in the cellar until winter.

We have a lot of sheep, which also have to be driven to the pasture. In summer, lush grass sprouts there and the animals run around freely. All day long they eat, rest lying down, then eat again, look for water and drink. In the evening, the men take them to the stable.

It is mainly because of the animals that we go to the jailoo. They feel comfortable there. Throughout the year, we prepare food for them and collect grass. During the summer, our animals change their coats, gain weight and grow. We also stock up on food for ourselves during that time. In summer, the sheep also give birth to their lambs. When we return to the village, they are already a bit bigger. We shear our sheep regularly. If we don't, they don't gain weight. The state used to take the wool from us for processing, but now for some reason they don't do it anymore. I now use some of the wool to make kijis, felt rugs.

“My sons say they will continue going to the mountains in the summer. My eldest son owns over 500 sheep.”

Life on the jailoo is not difficult for me, everything is easier there. The atmosphere is good, it's quiet. I couldn't live in the city or a village in the summer. We consider our animals a part of the family and necessary for a good life. One of our proverbs says not to beat a horse because it would mean beating yourself. Another proverb says: “A horse is a wing for a man”. This shows the importance of horses in our country. My sons say they will continue going to the mountains in the summer. My eldest son owns over 500 sheep, my other sons have horses. Only one of my sons lives in the city.

I am aware that today there is also industrial animal farming, where animals are bred for meat. I think that's fine. But I also know that they inject the animals with drugs and give them food to make them grow faster. That is reflected in the taste and digestibility of the meat. I am used to clean meat and I can taste immediately if there are foreign substances in it. And I don't think there is any better meat than that from an animal raised on the jailoo.

More than one drop of sweat

a photo gallery by Fredrik Naumann

A cricket player, a skier, a surfer: The Norwegian photographer Fredrik Naumann has photographed people doing sport as a job - and for fun

What “Safe Spaces” mean for people who face discrimination - and how we can make them obsolete.

About a special animal in Bolivia

Our country is plagued by a never-ending cycle of violence. But how have people learned to deal with the omnipresence of death?