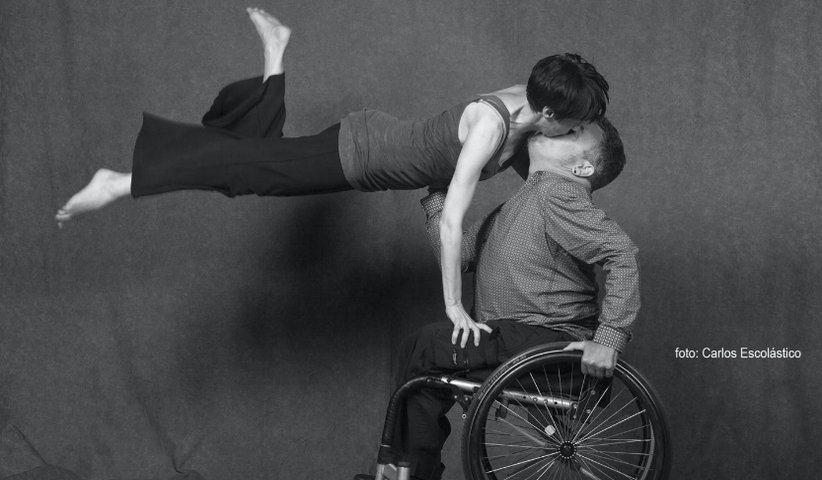 Why do many people fear bodies that are different from their own?

It all began in a neighbourhood centre in Barcelona. I had recently moved to the area — and had no money. Especially not for dance lessons in the studios that Google spat out after I typed in the keywords “lessons, contemporary, dance, Barcelona”. But the neighbourhood centre of my quarter “Cocheras de Sants”, offered dozens of courses. Dance lessons for only 60 euros a trimester, and even less for the unemployed (which I was then). Something described as “more inclusive dance”, aroused my curiosity: “An artistic and creative space, where through dance and improvisation, integrative connections can be created between people with mixed skills”. The phrase “diversity is seen as an opportunity and not a limitation” was the idea that prompted me to jump in at the deep end. I wanted to learn to dance, not starting from the standard starting point, but from a diverse one — and I wanted to write about it.

A week later I find myself in a circle, with people with crutches next to people in electric or manual wheelchairs next to people in plaster. None of them seem able to pirouette or to turn. They are not even half in shape! I think. Only the teacher has a dancer's physique: prominent quadriceps muscles at the front of their thighs, a wide chest, narrow hips, defined arms, flat stomach. My prejudice whispers to me: “You came to dance lessons to learn how to fly and none of your co-dancers can even walk without problems.”

“I can't do pirouettes either”

Besides the teacher, I am the only one who, judged on optics alone, could be a dancer. Idiotically, it boosts my mood, but it also frightens me: I have not danced for years. Will everyone here assume I am something that I'm not because I have the most standard body shape? I can't do pirouettes either.

We all say our names and why we are here. I am not telling the truth - or at least not the whole truth. I say: “I am here because I want to dance in the semantic field of diversity and get to experience a mixture of skills”. What I avoid saying is that I'm here because I don't can't afford professional classes. A co-dancer takes a moment to introduce herself. Later she tells me that she has had cerebral palsy since birth. She rests on a rollator and is slim and muscular. The sight of her surprises me, because, until now, I never had the opportunity to look at a non-normative body for so long: her fingers are unusually convex and concave (later I will learn that this is known as muscle hypertension), her knees are turned inwards and upper body slightly tilts forward. When I look at them, I feel a sense of curiosity.

Never before had I had a colleague who did not fit the physical norm. But as Desiree Cascales, dancer of the ensemble “Liant la Troca” and known as Desi by all, begins to speak, my analytical capacity immediately stalls. I am touched and have to hold back my tears. Her guttural pronunciation (which is hardly understandable for someone who is not used to it) and the squeaking of her rollator deal a blow to the ableist system. This approach which our stubbornly binary society divides into the able and the unable.

“Ablist” is  a word that I only learnt after the first meeting with Desi; as I begin to turn the struggle of my non-normative classmates into my own fight. But first I listen to Desi - and then I ask her questions:

Desi: People with disabilities don't have access to professional training. The only way into this world is via integrative dance. All your life you must adapt to society because you are always the “other one”. But at some point, I realised that even professional dancers can't do everything.  Many can't improvise, for example.
Me: What do you mean?
Desi: A few years ago dancers from the integrative dance ensemble “Liant la Troca” worked for a whole week with dancers from the Institute of Dance and Performing Arts in Catalonia. On the first day director Jordi Cortés told us to improvise. And all the “normal” students from the institute stood still. They were so used to having someone to tell them what to do.
Me: The music started, they were told “improvise” and they didn’t move?
Desi: They don't usually improvise. They were completely motionless for five minutes while we we danced, as if it came from our souls. They watched us. They probably thought: “I can't do that”. For many of them it was the first time that they saw wheelchairs up close.
Me: Their heads were bursting.
Desi: They were afraid of getting in contact because of our otherness. I had to say very clearly what they could do: “Take me up”, “you can support you here”, “you can take the wheelchair apart, you can play with it”. We danced with each other for a week. Quite a few taboos were destroyed.
Me: What taboos?
Desi: Let’s start with the simplest taboos: that a person with a disability is neither weak nor vulnerable nor sick. That means you can touch them, and if you do, they don't break. And let's finish with the most political: that a person with a disability can steal a large stage. They can out-dance those who don't have any handicap.

What Desi and I have in common is that neither of us want “integrative” nor “inclusive dance”. I call it “dance for precarious people”. The prevailing ablist system wants to differentiate between Desi and me, because she has a disability and I don’t. But we are united in our fight against it. The system of dance excludes us both, because neither us corresponds to its physical or material expectations. In the dance classes for precarious people, we come together as outcasts. In their song “El viejo de arriba”, the Argentinean band Bersuit Vergarabat sings of a “liberated world”, in which a “mambo of the marginalised” is danced. To recognise our marginality and not to try to normalise it (because that would mean participating in the rules of the game that oppresses us) - this is what is freeing Desi, me and so many other precarious dancers.

The power of prohibition

How taboos are created and why people break them.

A tribal chief in Ghana has to know what he may and may not do.