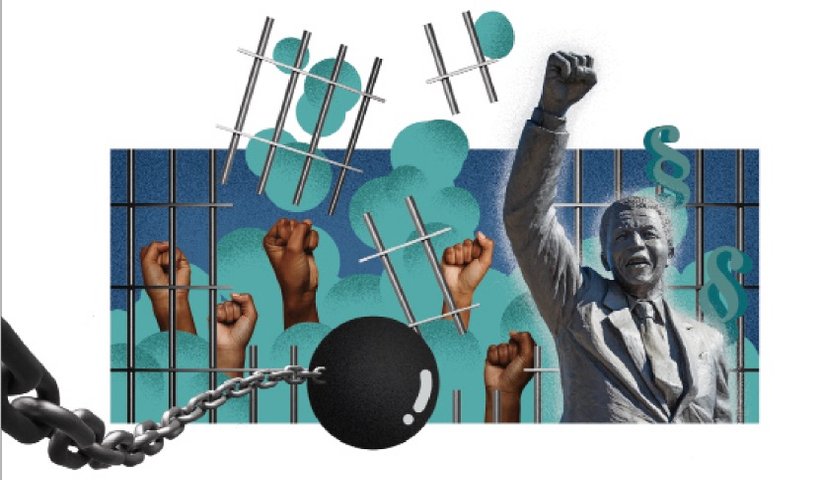 No other African country has as many people behind bars as South Africa. An indictment, argues our author, and good reason to ask whether the prison system is in keeping with our times.

Nelson Mandela, perhaps the world’s most famous prisoner, once claimed that no one truly knows a country until you have been inside its jails. He was released in 1990 after 27 years imprisonment. With the first democratic elections and the fall of Apartheid, South Africa embarked on an ambitious nation-building projectand a new justice system. From a legal order in which parliament reigned supreme and the judiciary unquestioningly applied its racist and repressive laws, we moved to a system of constitutional supremacy, where all laws and conduct are measured against a progressive bill of rights and the values of an open and democratic society. And yet, despite these values, our legal system is one that continues to throw thousands of people into cages for decades at a time. If, as Mandela claimed, we should look to prisons to form our opinion of a country, what does the fact that South Africa imprisons more people than any other country in Africa say about our nation and the progressive values we claim to hold dear?

“Prison as an institution should be abolished”

For some, full prisons are an indication of a safer society, for me they are the opposite: the symptom of a failed legal system. And I go even further: prison as an institution should be abolished. This year, in response to yet more brutal murders of black people by police officers in the USA, Black Lives Matter protests brought calls for police and prison abolition into the limelight. Many protestors rejected proposed reforms, which they argued had been unsuccessful in the past. Instead they put forward abolition and defunding as the most appropriate response to the racist nature of US prisons and policing. Prison abolitionists argue that prisons are inherently abusive institutions that were created to and continue to serve the interests of the political elite and capital by using violence.

Calls to reduce the role played by police and prisons may seem wholly inappropriate in South Africa. Ranked third in the world for our crime rate, rates of violent crimes such as murder, assault, rape and housebreaking are especially concerning. In 2017, South Africa had a murder rate of 28.6 intentional homicides per 100,000 citizens. In contrast, our nearest neighbours Zimbabwe and Botswana have 8 murders per 100,000 people while Germany has 0.8 homicides per 100 000. Seven women and three children are killed everyday. Recently, sky-high crime rates have even sparked public demands to bring back the death penalty. But it is precisely this culture of widespread violence and crime in South Africa that should compel us to question and critique the role that prisons play in our societies. Is it a success when there are so many offences and consequently so many prisoners? Wouldn't it make more sense to ask why violent crime persists despite our eagerness to lock people up? If the purpose of prisons is to contain dangerous people, prevent crime and rehabilitate offenders then South Africa is a searing indictment of prisons.

The real question remains: What makes people turn violent in the first place? In the search for an answer, it is worth looking at South African history.

Prisons are an imposition on South Africa, created to serve colonial interests of political repression, white supremacy and economic exploitation rather than to secure justice. Introduced by the Dutch, prisons became widespread and formalised by the British only during the abolition of slavery when colonial industry and farms began to suffer due to the lack of slave labour. Prisons, in conjunction with pass laws criminalising the free movement of slaves and indigenous South Africans as well as vagrancy and idleness laws criminalising the act of not working, helped secure cheap labour for colonists. Prison labour was integral to building public infrastructure and maintaining private industry, including farms and mines. At the same time, prisons were used as tools of repression to detain those who rebelled against colonialism and later the racist Apartheid system. Prison conditions also upheld myths of white supremacy. White prisoners were believed to be more susceptible to rehabilitation and were thus detained separately for shorter sentences, under better conditions and with greater access to opportunities for rehabilitation. This legacy has great bearing on how prisons continue to function today.

Despite extensive post-Apartheid reform efforts prisons in South Africa remain sites of cruelty and catch-basins for the nation’s disenfranchised, offering little in the way of justice to victims. Poor black and coloured South Africans still make up the majority of the prison population, which is filled with people who have histories of mental illness, drug addiction, abuse, trauma and gang affiliation. Rates of violence and rape are incredibly high, with some estimating that approximately 80 percent of prisoners in Pollsmoor prison in the Western Cape experienced rape in a single month. Far from preventing violence, prisons simply contain it within their walls. Upon release, up to 95 percent of prisoners reoffend, failed by rehabilitative programmes that are underfunded, poorly staffed and do not target the underlying causes that lead to people committing crime. As far as prison conditions go, the Former Justice of the Constitutional Court, Edwin Cameron, who currently heads the Judicial Inspectorate for Correctional Services, has himself observed that reform efforts failed to fundamentally change the nature of South African prisons.

The mere existence of prisons also means that the victims of crime receive little justice: At most, in the rare event that crimes are reported, prosecuted and result in a conviction, prisons satisfy only a victim’s desire for revenge. Very few victims receive closure, counselling or reparation after enduring lengthy and traumatising trials. Instead, there is a lack of psychological care and financial support.

“A solution to crime and violence that does not include prisons must thus tackle all sorts of oppression and must include a network of alternatives to crowd out prisons.”

Prisons are serve as a band aid poorly suited to healing the bullet holes of inequality, poverty and the legacy of institutionalised violence that experts agree drives crime in South Africa. Further, a fight against all harm, whether criminalised or not, must be a fight against all forms of oppression. Prisons that have functioned as tools of colonialism, Apartheid and capitalism for centuries are incapable of furthering this fight. A solution to crime and violence that does not include prisons must thus tackle all sorts of oppression and must include a network of alternatives to crowd out prisons.

Abolition thus entails deep systemic change not only of the justice system but of our economic and political reality. This begins with the significant redistribution of wealth and power. In addition, quality, free or affordable social services are necessary to build a society in which people are not pushed into poverty, desperation and gang life. Quality education, free healthcare including psychological healthcare and voluntary addiction services, social welfare such as childcare, pension and basic income grants could all prevent a large number of crimes. In addition, genuine attempts to combat patriarchal and violent attitudes must be launched and funded as must temporary measures that allow people to escape abusive relationships before they become violent, such as well-funded shelters, housing and income grants.

A look at the Canadian province of Nova Scotia shows what this can look like: immigrant women have formed cooperatives to provide housing, childcare and financial assistance to allow women to leave their abusers. They host self-defence workshops, community gardens and feeding schemes. They train members of the community to respond to a call for help and to deescalate conflict without violence. They facilitate confrontations that allow victims to confront perpetrators with the support of their families and friends.

Of course, harm will still occur. We need a justice system. But we must build justice systems based on reparation and reconciliation to address these harms.

Very promising in this regard are systems of restorative or transformative justice rather than punitive justice. The idea is to understand and combat the systemic causes of harm, understanding that all people cause harm and are harmed by others. It treats each situation as unique, asking how to meet immediate justice needs such as ensuring safety, the cessation of harmful behaviour and organic accountability for each specific situation as well as working in the long term to remedy the conditions that allow harm to happen. This can involve community safety plans such as child care and walking people home, study groups to allow people to learn about harm and justice together, accessible healing and trauma services, conflict mediation practices, and community interventions.

“This is an approach that is far more consistent with pre-colonial and indigenous African justice systems which, for the most part, were and are restorative and community-based in nature rather than punitive.”

Restorative justice is an approach to justice that aims to involve the perpetrator, victim, families and the community to collectively identify and address harms, needs and obligations through accepting responsibility, making restitution, taking measures to prevent a recurrence of the incident and promoting reconciliation. This is an approach that is far more consistent with pre-colonial and indigenous African justice systems which, for the most part, were and are restorative and community-based in nature rather than punitive. In South Africa, the concept of ubuntu is central to pre-colonial and current customary law promoting ideas of reconciliation, restoration and interdependence. Traditional courts focus on acknowledging the existence of harm and determining through communal dispute resolution how to make amends. Restorative justice is also an approach that has proven its merits. Criminologists analysed the results of 36 studies from around the world comparing the efficacy of restorative justice with conventional criminal justice. The studies showed that restorative justice significantly reduced repeat offending, victim’s post-traumatic stress symptoms and desires for revenge and reduced costs, thus allowing more offenders to be brought to justice. Both victims and offenders reported more satisfaction with restorative justice than with the criminal justice system.

South Africa has acknowledged the central role of restorative justice in our legal system but has unfortunately not rolled out this model for widespread use with violent crimes. These systemic and mindset changes will not happen overnight and thus abolitionism is necessarily incremental. As such, there is still a place for reform in abolitionism but only those reforms that reduce the role that prisons play rather than those that expand the carceral system. Abolitionist reforms could take the form of strategies to prevent torture, ensure that prisoners receive adequate nutrition and efforts to reduce overcrowding without building more prisons, such as decriminalising petty and minor offences as well as drug use and sex work, decreasing the pre-trial detainee population and reducing sentences.

As the Statewide Harm Reduction Coalition argue: “A cage is a cage is a cage. We want strategies that let people out of cages, not ones that are for building nicer or better cages.”

In the shade of the cedar tree

The cedar tree is Lebanon's national symbol. Unfortunately, the ancient trees can be seen only sporadically

How to write about things you haven’t experienced yourself.

A tribal chief in Ghana has to know what he may and may not do.