A story goes around the world (chapter 8 of 8) 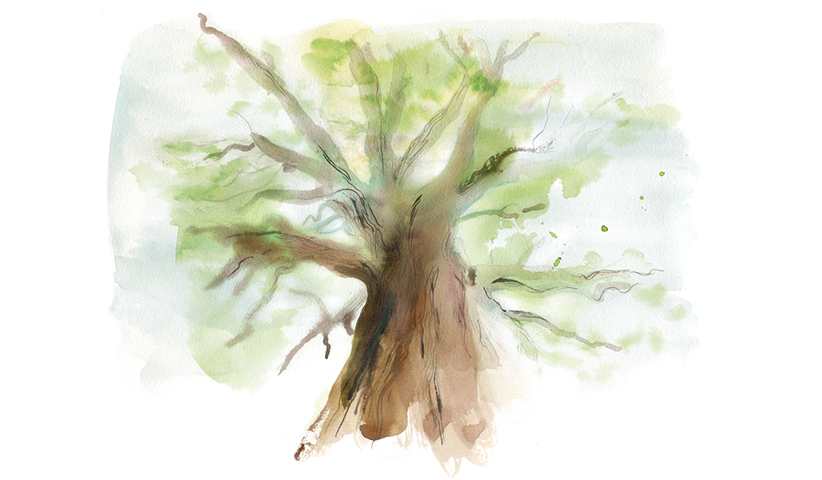 During the lockdown we asked eight international authors to write a story together. Chapter 8.

... that's where a manuscript ended. Elsa, one of the avatars of the new times, found that she could swim. She found also that perhaps the water that Lev Smidovych was referring to was not just the water that you drink, the water that you can drown in. What if the entire manuscript of Smidovych was an allegory, indeed a set of secret codes. Then the catastrophe would not be only a historical event that has happened, but a prevision of an event to come, an event which has already begun, and whose end cannot be foreseen.

I make these assertions because of incidents which changed my perception of what had happened, the secret and cryptic chain of events at once puzzling and clear ...

One day a tramp in a tattered gabardine overcoat, with eyes of sober mischief and a voice with faint traces of an Ukrainian accent, informed me that for the kindness of bread he would like to leave me a certain quantity of worthless looking documents. Cautioned by the pandemic still in everyone's memory, I was reluctant to receive what could only be contaminated papers. But before I could voice a protest, he had deposited them in my arms, tenderly as if they were a new born baby, and then scurried from sight.

After much careful handling, I found them to be one of the forbidden diaries. I accept that I have now joined the marked ones. Sometimes I hear a shadow slinking along behind me, which disappears when I look backwards. I am aware that seven others have received, in a cryptic form or other, one of these manuscripts. I spend what time is left to me deciphering the language of trees.

Then there was the Rastafarian Samizdat diary of Winston Judah, who wrote about a mysterious occurrence in an unnamed Caribbean city. He too, finding himself being followed, fled into the hills and disappeared from history. His diary was written in a code that used every 3rd letter of the Hebrew alphabet, encrypted in a binary language to the dimensions of 12.

In Africa the diarist of the unnamed Apocalypse created a new language out of the combination of Swahili and the secret alphabet invented by a shamanic herbalist. Every syllable is related to a colour which is related to one of the 16 directions. The words in these diaries seemed at first arbitrary. But they were the measure of the danger incurred if anyone was found in possession of them. Some were diaries of events that took place recently, but which a collective brainwashing has erased from our living memory. So accurate are they of what they described that they amount to a blueprint of the future terror to be wrought on our lives.

No one knows to whom these diaries are entrusted. But you can be sure that a long period of surveillance and study will have gone into the choosing of the next avatar of the manuscript. Perhaps to qualify you must be an incarnation of one who notes down what is happening to us unseen every day.

And so it was agreed, by a secret committee of invisibles, that the diaries would be passed on to someone whom no one else would know, and it was their responsibility to pass them on, or upon receipt of a secret sign, which would be clear at the time, to reveal the diaries to the world in as simple and as complete a manner as possible.

No one knows which of these diaries are real. But revelations of the real ones could alter the world as we know it. Lev, Truth, J.D, Rulfo, Winston and others were forerunners of the world to come. Elsa played her part with scrupulous courage. Those who perished protecting these secrets have their names written in the heart of the future.

It is our turn to protect, to pass on, to survive...

The manuscript came to me encrypted. I read the diaries in the course of a lengthy morning. The world has since changed, all the troubles suppressed, all the protests airbrushed. We are in the new reality. It looks very like the old reality. But there is something different. There is a new silence, a new complicity everywhere. In a sense they have won. They brought the world back to normal and ironed out its wrinkles. People now go to the shops, to the pharmacies, to their workplaces. The absence of people, the emptiness of the streets, has been replaced with the presence of people, but also with the absence of true communication, the absence of truth. We behave as if things are the way they were before, but we barely look one another in the eye. We speak, but our words are vague. We have secretly become strangers to one another.

All the old tropes are back, to give the feeling that the world has returned to normal. They still hound immigrants at borders, and the evil tide of raw nationalism is sounding again through the lands. The really strange thing is that before everyone took the world for what it was. But now we all know that something has insinuated itself into our lives. We know what we have become and we are not going to do anything about it because they have successfully cowed us into a state of a low-grade but persistent fear. The fear has no name. It only invites a complicity, which we are all willing to give.

I finished reading the manuscript and I went out to the park. Couples were jogging together. Many people still wear masks. Near the council estate I saw a group of heavily armed policemen descend on some people and smash them into a pulp while everyone walked on by, or stopped to read their emails on their phones, or jogged on towards the cement path of the canal.

They have propped up the external structure of things, but the heart of the system has been devoured by a virus

At the park I sat against my favourite tree. I shut my eyes. What are we to do with all this dangerous knowledge that has come down us? How can I go on living knowing what I know? Is one to set the house on fire or set one's house in order? The choice for the mind has never been more stark. Beneath the apparent normality, the world is burning. The house is coming down. They have propped up the external structure of things, but the heart of the system has been devoured by a virus greater than anything the world has known before. It is the virus of hopelessness. Those who would conquer the world turn out to have no idea what to do with it beyond the amassing of profit. But of what use is profit and power if the world burns, if the world dies. How can we communicate to those who want to conquer the world that what they are really doing is killing it? What they will win is nothing but death.

I lean against the tree. Maybe it is the extreme mood of realisation I am in, but I notice something I had never noticed before. I noticed the calm that seemed to pour out of the tree. It was an oak tree, several hundred years old, older than the graves that punctuate the park. Then I realise that the tree is speaking to me. It is not speaking in words. What they will win is a fire that transforms as it devours. Be calm. Release the power of what you know when the signs are right from the underground. There is a power greater than conquerors, and it renews the structure of the world. Things will pass away so that they may return with innocence. All around the world the story is travelling. This story is travelling. It grows with each new mind that reads it, that listens to its cries, its secret messages. We are waiting. Then at the right moment, change will pounce.

I lay against the tree, and listened. Then woke into a new dream.

It could fall to you to be one of the unknown protectors of the earth. If you are reading this, then you probably are one. Hold the secret close. Drink the water of understanding. Without seeming to, change the structure that shapes our lives. You must be other than you seem.

The whole story will be published in our German-language magazine: ORDER HERE

A story goes around the world (In practice)

In our own hands

The NGO Ketaaketi is breaking new ground in development work. Its success derives from the autonomy and initiative of the people in the three countries it operates in.

A football pitch in Cape Verde

Young people in Cape Verde are crazy about football.

“It is harder to be a young french-arab today, than ever before”

a conversation with Marie NDiaye

In her novel, the author writes about questions of ethnic origin and social mobility. A discussion about the advantages of immigration, as well as the French president and his wife.

How New York's glorious "hero sandwich" munched its way onto the US literary scene.

A story goes around the world (In Europe)

Barack Obama's former environmental advisor is building a high-tech village in the Netherlands.