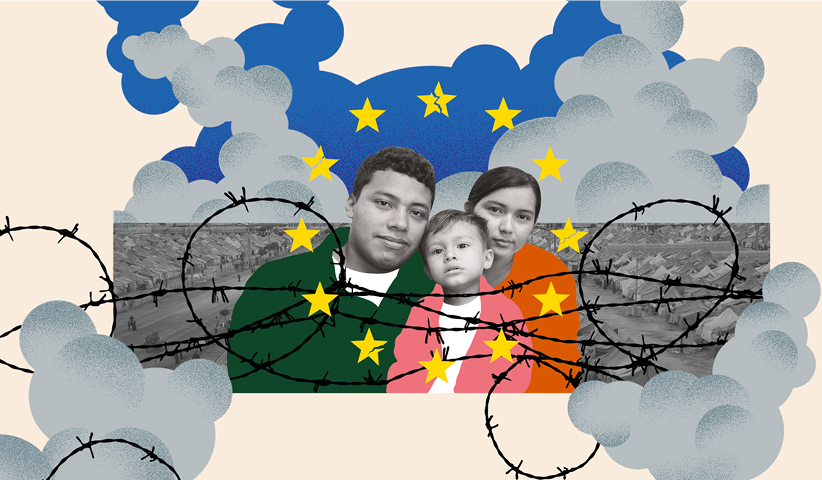 With ammunition and tear gas, Europe is trying to block refugees' passage to Greece. Rather than offering them security, Europe is presenting itself as vulnerable.

On March 2, 2020, the 22-year-old Syrian Muhammad al-Arab was allegedly struck by rubber bullets fired by Greek border guards on the Turkish-Greek border. He later died of his injuries in a Turkish hospital. Although the Greek authorities authorities dismissed the report as fake news, the London research group Forensic Architecture has reconstructed and confirmed the shooting. That puts al-Arab among more than 40,000 people who are estimated to have died while trying reach EU territory. Worldwide, the European external border is the the deadliest border of all. Most deaths occur far from the public gaze on the Mediterranean Sea, where boats filled with refugees capsize with and help either arrives too late or not at all. Now the whole world can observe the extent of violence underway along Europe's borders.

The escalation has been triggered by the Refugee Convention between the European Union and Turkey under the Turkish President Recep Tayyip Erdoğan. To seek EU and NATO support for his illegal intervention in Syria, Erdoğan once again resorted to his most powerful weapon. In full knowledge that the EU is waging a war against migration along its outside borders, he is using the four million refugees in Turkey like ammunition. Inside the country, he is inciting a racist anti-immigrant mob to chase them away. At the same time, state authorities send free buses to take them back to the border. The refugees are left with scant chance to avoid this humiliating game between Turkey and the EU. Meanwhile, the EU is sending Greece extra Frontex staff to support the Greek officials along the border. There, people seeking protection are attacked with tear gas and rubber bullets.

Europe has been debating the problems of migration for decades. While initially it was predominantly seen as a matter of national identity and social responsibility, in the last 20 years it has become the norm to consider migration as a security issue. Looking at the European context today, we need to go a step further and talk of a new militarisation against migration. The protection of the external border is accompanied, and not only verbally, by war-like rhetoric. Moreover, the militant fight against illegal migration into the EU has become a top priority and the rule of law, international legal agreements and basic democratic norms are being suspended.

Looking at the European context today, we need to talk of a new militarisation against migration

The starting point for this was the abolition of internal borders and the introduction of free movement of people within the Schengen bloc while simultaneously hermetically sealing Europe’s external borders and gradually outsourcing the task to neighbouring third countries. This is described in migration research as externalisation. Right now the European border policy is almost unmanageable in its reach and detail. This complicates transparency and jurisdiction, which are the basic requirements for democratic controls. On top of this comes the racist dehumanisation and criminalisation of migration, which has entered the discourse over and over again for twenty years and recurred on an almost daily basis since 2015. This means that, in the end, only a few are interested in compliance with basic democratic principles.

A prime example of this is the so-called refugee deal, which the EU concluded with Turkey four years ago which led to the recent events on the Turkish-Greek border. In March 2016 Donald Tusk, President of the European Council, and the Turkish Prime Minister Davutoğlu, announced an agreement with the EU and Turkey to cooperate on refugees. Turkey committed itself to tighten controls on its borders with Greece to and to take refugees back when they cross via the Turkish sea route. In return, the EU said it would take in a maximum of 72,000 Syrians from Turkey along legal routes. In order to legalise the deportations of refugees from the islands, the EU declared Turkey as a safe third country - even though it by no means meets the criteria for this status. This violates the EU’s own asylum return directive, which stipulates that a country has to treat refugees according to the UN Refugee Convention and not to return them to countries which endanger their security. Neither of these points apply to Turkey, which has signed the Geneva Refugee Convention, but has not given up territorial reservations. Already in 2015 Human rights organisations reported on asylum seekers being sent from Turkey to Iraq, to Syria or to Afghanistan, sparking hefty criticism from lawyers and NGOs. In addition, at the time of the negotiations political repression was on the rise in Turkey, meaning that even Turkish citizens were fleeing their country, something which was overlooked in the debate about secure third-party states.

It has become a consensus that we seal the borders, even by turning to undemocratic means

And the inconsistencies don't stop there. As three asylum seekers were threatened with deportation from Greece to Turkey, their lawyers turned to the European Court of Justice. The court had the task of considering whether the refugee agreement between the EU and Turkey was lawful at all. But the answer that hailed from the European Court of Justice in February 2017 was bewildering: It was not responsible for this question because after detailed examination no agreement between an EU body and Turkey could be found. The court summarised that neither the European Council or any other EU body has ever entered into such an agreement. Explanation for this finding has been found in protocol details listed that suggest that, unlike in the text and video of the press release, representatives of the EU member states, rather than the European Council, were responsible for the declaration. The court left it open as to why six billion euros from the EU budget flowed to Turkey, why the EU declared Turkey a safe third country and who has the legal jurisdiction of the agreement.

After this decision by the Court of Justice, constitutional lawyers see the EU-Turkey declaration as existing in a legal vacuum. The fact that the court's ruling failed to spark a political or a media outcry, shows the extent to which it has become a consensus that we seal the borders, even by turning to undemocratic means. This consensus is partly based on the fear that more refugees arriving in Europe could fuel the rise of fascism. Instead of questioning why the racist agenda and the demonisation of refugees are having such an impact in Europe, the militarisation of migration continues.

To get a sense of the political scope of an illegal refugee deal, you should take a look at the Greek islands Lesbos, Chios, Samos, Leros and Kos. There, currently over 40,000 refugees are fighting to survive in inhumane conditions in desolate camps. At the urging of the EU, in 2015 a so-called hotspot centres were built. The hotspot concept, which was introduced in May 2015 by the EU commission in its framework for a new agenda for migration, meant that it would no longer be up to individual nation states to deal with the process of identification, registration and administration. Rather countries would work in cooperation with the EU agencies Frontex, Europol, EASO and Eurojust. Everything that the EU presented as support for Greece and Italy turned out to be methods of control. In keeping with the Dublin agreement, the country where the migrant first enters the bloc, has responsibility for them. This is controlled by taking finger prints, which are saved in the especially created European database called Eurodac. With the introduction of the hotspot concept, EU security agencies are now on the ground to force the identification and registration of refugees. That means they intervene directly in the national migration management of respective countries.

At first the hotspot concept was only rolled out in Italy and Greece. Following the EU-Turkey agreement, in Greece these turned into permanent refugee camps. Following that declaration everyone who arrives by sea is automatically imprisoned, then classified into “lawful" or "illegal" migrants. For this purpose, a filter mechanism is introduced in the Greek hotspots: before someone can apply for asylum, checks are made whether or not they are allowed to make an asylum application in Greece at all. For someone who has arrived via Turkey, they are considered inadmissible unless they can prove that their life would be endangered by returning to Turkey. Then they are deported to Turkey. This admissibility check happens ahead of the real asylum procedure and it creates an an additional administrative hurdle for refugees as well as for the Greek authorities. It results in hopelessly overcrowded camps. In Moria, the largest refugee camp in Europe, currently over 20,000 people live in catastrophic conditions in a camp designed for just 2,840 people.

With their barbed wire fences, they recall detention camps from the second world war, and they represent a political and moral low point in European migration policy. Given the billions that are invested in the military infrastructure to secure the EU’s external borders, the problem can’t simply be explained by sheer numbers, costs or mismanagement. The hotspot camps are a measure of deterrence and isolation, they are a symbol of the dehumanisation of refugees. They are yet another instrument of the militarisation of the defence against immigration: Instead of protecting refugees, they are fight against them.

So what is happening before our eyes is the hollowing out of the “refugee” category, whose right to protection was internationally legalised in the Geneva Refugee Convention. The "irregular" migrant category takes its place, and it is now in a reversal of the situation, the EU which claims protection. This shift was evident in the renaming of the EU commission’s migration department: It was long labelled: “Migration and Home Affairs” and now it is called: “Protection of our European way of life”. Following a wave of criticism it was renamed: “Promotion of our European way of life,” but the originally adopted name is revealing. The name "Protection of the European way of life” refereed to respecting fundamental rights according to article two of the Lisbon Treaty, tweeted the then EU Commission President Ursula von der Leyen.

There was nothing more to be heard on the subject when the President visited Greece in March, to observe the situation on the Turkish-Greek border. The press photo showed how she looks down onto the border strip from a military helicopter. There, in the hotspots, or in the nameless graves along the European coast, she got a chance to see what the European way of life really boils down to, if she wanted to.

Earth, how are you doing? (In theory)

Why nationalism, in all its forms, demands a response.

There is a lot of talk about Laura Codruta Kövesi in Romania at the moment. A year ago the chief prosecutor of the National Anti-Corruption Authority was dismissed by the government.

The Jungle in the Dome

Refugees and volunteers from 24 nations are on the road with their unique theatre show - and take their own stage wherever they travel.

Are we running out of water? (Theory)

Welcome to the club!

In the light of the Ukraine war, Europe needs to allow new countries to join and also strengthen its cultural policy. After all, the European Union is first and foremost a cultural project