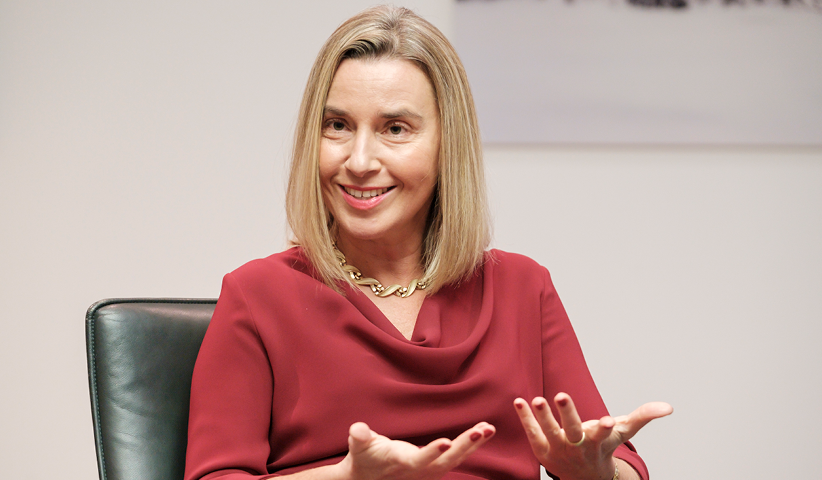 Mrs Mogherini, looking around the world we see autocracy and political repression. At the same time there is a rise in civil resistance, for example in Hong Kong and Chile. Should the EU encourage such movements?

Encouraging acts of resistance or straight out fighting is not necessarily in the DNA of the European Union. But encouraging participation and active citizenship certainly is. So while it is important for the EU to stay out of internal political affairs to continue being perceived as neutral by the rest of the world, there is also an impetus to support human rights and political activism. In some countries, voicing your support for human rights is already an act of resistance. The EU’s role in my eyes is to make civil societies around the world know that they can count on it. The EU needs to defend human rights, raise cases where rights are breached and even attend trials to make sure that the rule of law is being upheld. If you look at what the EU has done in Eastern Europe, in the Arab World and in Asia over the past years, the common theme always is supporting civil societies. Now this doesn’t necessarily mean supporting active resistance against regimes, but it is about empowering people.

Is the role of the EU as a mediator more important because the US has lost credibility?

Well, certainly the policy of the United States has shifted in recent years. I still remember the moment when a US Secretary of State – who I won’t name – openly said that human rights would now not be part of American policy anymore. That changed the international playing field completely and it was very bad news. And it was a change that gave us Europeans a lot of responsibility. We now need to take over that job and we are definitely perceived by the world as an honest broker. We already invest enormously in human development and humanitarian assistance and the empowerment for young people or women. In a way, the EU has established itself in a role that historically fell to states like Norway or Switzerland – a bridge-builder so to say. I think in this case the heterogeneity of the EU in fact gives us an advantage: We – and I still say we, because I am a European – can never be accused of having a hidden agenda, because the EU consists of 27 highly heterogeneous countries – with governments from the far right to the far left – who take decisions together.

How did you, as high representative, decide when to put human rights on top of the agenda and when not to? When Russia illegally annexed Crimea, the EU’s response was criticised as not being strong enough …

... but it was still the strongest. Let me tell you that in my time as High Representative human rights were always on the agenda. I can't remember a meeting – apart from some side meeting around a special issue – in which human rights didn’t somehow come up.

Within the democracies of the EU there are plenty of means to voice political opposition. Still, even here there is increasing radical resistance, take Extinction Rebellion, the yellow vest protests in France or the G20 protests in Hamburg. Is the EU partly to blame?

To me, I would first of all say that violence is the red line: No matter how good the cause is, when a protest becomes violent, it can ruin even the most correct and noble cause. That is the starting point. Now to answer your question: My impression is that when you look at the polls, showing the recent lack of trust in EU institutions – and even more so in national institutions – it demonstrates that there is something fundamentally broken in the way that active participation happens. We need to rethink the way in which citizens can actively take part in decision-making in a more effective manner. I think that we do not have an answer yet, however. We see spontaneous bursts of resistance bubbling up all around the world around certain issues, but we still all collectively struggle with the question of how to improve the polity of our democracies and of our parliamentary system in a way that leads to less frustration.

I do think, however, that every time resistance is forming from within civil society – for example on climate change – it is one of the highest duties of political institutions to not only take it seriously, but to also to act upon it. Take the COP 25, the climate conference in Madrid, as an example: When the people don’t see their governments delivering results, they certainly have a right to be frustrated.

Do you fear that democracies can’t respond to criticism fast enough?

I think it was a Chinese collogue of mine, who after the Brexit referendum joked with me and said: “Are you still sure that voting is the right way?” (laughs)

What did you say?

I said: “Sure it is!” But joking aside, I think there’s a serious point to be made here: The less democracy works, the more appealing the totalitarian option becomes by default. That is the dramatic side of the current developments. If democracies don’t take civil resistance seriously and don’t work on improving, their shortcomings serve to justify other types of rule. And in those systems, political participation is not an option at all. We live in this paradox that in the search for more democracy we might end up with no democracy at all. That is a contradiction that is quite difficult to bear.

Do you remember the last time you personally resisted something?

Apart from my alarm clock? (laughs) Well, I do. I somehow feel that during my time as High Representative every time I chose to go against the mainstream represented an act of resistance. When Donald Trump announced that the US were stepping out of the Nuclear Deal with Iran, I came out and announced that the EU would remain committed to the deal as long as the Iranians were as well. That was certainly an act of resistance, but maybe in a more institutional context.

Does it take a lot of energy to swim against the current when you are representing an organisation like the EU?

It does take a lot of courage and a lot of good people around, just like every other act of resistance. Sometimes in office, saying nothing can be a much better way to resist than speaking out. In my five years as High Representative I resisted quite a lot by trying to never accept the argument that “things have always worked this way and will never change”. I resisted the natural tendency of the institution to avoid change.

The interview was conducted by Jenny Friedrich-Freska and Kai Schnier

There is a lot of talk about Laura Codruta Kövesi in Romania at the moment. A year ago the chief prosecutor of the National Anti-Corruption Authority was dismissed by the government.

69% of Brazilians are opposed to relaxing gun laws*

In January, the Brazilian government relaxed restrictions on the purchase of guns, even though a large part of the population was opposed to the move.

“Reading others means listening to them”

an interview with Federico Italiano

Italian poet Federico Italiano has created a volume of poetry called “Grand Tour”, which brings together the young European poetry scene. In an interview, he explains what the generation of writers have in common and the surprises he found along the way.

A letter to Europe

In theory you know exactly how uprisings end up being successful. In practice, it’s not so simple.