Courage in the workplace 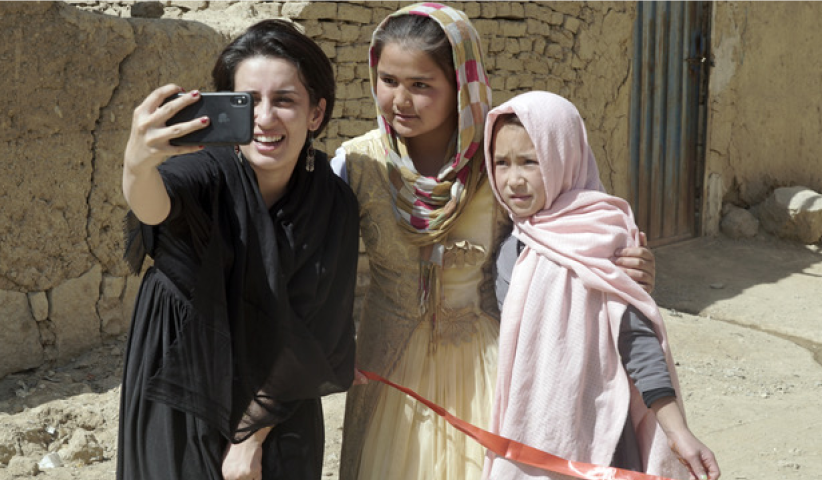 The number of women with jobs is steadily increasing in Afghanistan. But many say their daily working lives are challenging. Newly won freedoms are by no means self-evident.

At the end of January 2020, a street banner in the western Afghan province of Herat went viral on social media. It demanded an end to women working and accused men who were allowing their wives to work of “lacking a sense of honour”. It had been put up by a local religious leader.

Many are releasing their pent-up anger because the authorities have not stopped religious extremists from rolling back the successes achieved over the last 19 years – more jobs, better educational opportunities and more political posts for women. An online petition has demanded that the government curtail the activities of religious leaders.

Shortly before this, the development organisation “Asia Foundation” released the findings of a 2019 survey, showing that 76 percent of Afghanistan’s populatino supported jobs for women – six percent more than in 2018. But the biggest problem is still the lack of educational opportunities and participation, as well as the violence that women face.

“Forotan travels throughout Afghanistan to meet women and children”

A few years ago the journalist Farahnaz Forotan set up the civil society campaign #MyRedLine. It’s one of the most prominent social platforms encouraging Afghans to champion a sustainable peace deal between the central government and the Taliban. Forotan traveled around the country, establishing initiatives and talking with people about their concerns. As an employed woman, she has also repeatedly had to face problems, but she never let them divert her from her path. “After working for more than ten years, I have absolutely no idea what it would feel like to have a life without problems,” she says. “But I never let that cramp my style. It keeps my motivation up.”

Forotan’s campaign, which has helped her meet girls and young women all over Afghanistan, is one of the few platforms where women and men can talk about which values are non-negotiable when it comes to peace negotiations. In the areas of education, women’s rights, gender equality and press freedom, they come up with red lines that the government shouldn’t cross when it comes to negotiating a peace settlement. As a successful journalist, Forotan serves as a role model for other women in the country, but she also knows that a lot more needs to change in Afghanistan. “Even though I work hard every day, I feel like I’m not doing enough,” she says. “Every day that comes to an end is for me like a mission accomplished. And when I wake up the following morning, I know that today’s there’s going to be another challenge to confront, and I’ll confront it just like I have all the previous ones.”

The activist Marjan Nahid is also heavily involved in Herat Province with rights for women. She’s familiar with the long and rocky path she’s travelled since 2001, when the Taliban took away, besides many other fundamental rights, women’s right to work. Afghan women are still facing a host of challenges today. “Ever since I managed to break away from the life of a housewife and to achieve my goals in the office and elsewhere, I feel like I’ve grown wings,” she says. But even though women in occupations have more freedom in their social and professional lives, Nahid views the gains of recent years being jeopardised by the onward march of adherents of religious extremism.

Women in Afghanistan work in a variety of occupations, but the state is the largest employer. Promoting roles for women has become a major political strategy. According to 2019 figures, over half of Afghanistan’s more than 200,000 teachers are women. Many are involved in civil society organisations and, despite the continuing war against terrorism, there are many women in the military and the police.

Women who apply for state-run jobs are benefiting from this strategic promotion. Out of a maximum 100 points given out in recruitment tests for jobs in the public sector, the government awards five points extra to women who are interested, in a bid to motivate more women to apply. Alongside this, most public sector work locations offer childcare. Most international NGOs and UN bodies also offer posts specifically for women.

The 2004 constitution unreservedly accorded women the same rights as men, and stipulated that 25 percent of seats in parliament must be held by women. One female representative in the Afghan parliament is Nahid Fareed, who also comes from Herat Province. She’s concerned that advances made by Afghan women could turn out to be a delicate plant. She’s appealing to influential women in Afghanistan to take a stand in defending what they’ve achieved. “As a woman I feel particularly responsible for clearing a path for other women in our society,” she says. “My biggest success would be if young Afghan women in the future could walk the path I’m taking much more assertively than me.” Most Afghan women describe their everyday working lives as “challenging”. Society is not structured in a way that assures the participation of women. Even so, because of the ways society has changed over recent years, public perception of women as role models has visibly changed for the better. Women are increasingly seen in cafés and restaurants, in shops and businesses, on theatre stages and as artists.

“Women are increasingly seen in cafés and restaurants”

However, the activist Nargis Nehan, like many other Afghan women, doesn’t view employment for women as wholly unproblematic. She has worn many different hats over the last 20 years, and was the minister for mining and oil until October 2019. “The image of women who are working has clearly improved, but some in the community still perceive women as weak and at risk, thinking that it’s best if they’re back at home,” Nehan explains. “Patriarchy is deeply rooted in our society. The last 40 years have been deeply scarred by conflict, and this recent history has further consolidated patriarchal structures and has made our people even more conservative.”

Alongside all the strengthened laws and prescriptions are traditions, which play a more crucial part in rural areas than they do in the towns and which pose a serious obstacle for women who want to work. A lot of men react angrily if a female family member expresses her wish to work in an office. But working in your own farmyard is consistent with village traditions. Women are freer in towns because they can more easily obtain legal assistance and are, for example, better informed about their rights if they want a divorce. According to a 2018 report, 80 percent of all divorce proceedings were initiated by women. Nargis Nehan is optimistic that her example can give other young women in society the courage to escape an existence as a housewife. “To have a professional occupation is for me a great blessing and a good feeling.”

Meanwhile, the street banner in Herat has been taken down, and the online petition succeeded. The central government has promised to stop radical groups from stirring up further anti-women sentiment.

The talk of the town in Kabul

In the Afghanistani province of Kabul a major talking point is air pollution which kills more citizens than the war.

Talking about a revolution (World report)

Courage in the workplace

The number of women with jobs is steadily increasing in Afghanistan. But many say their daily working lives are challenging. Newly won freedoms are by no means self-evident.

Make it yourself (World report)

“The retreat started years ago”

in conversation with Waheedullah Orya

Radio host and journalist Waheedulaah Orya reported from the Afghan city of Mazar e-Sharif – until the Taliban threatened his life. From his exile in Greece he describes watching in disbelief as they recaptured his home country. A conversation

One year ago in September – following a dream that had finally come of age – I travelled to a country that I had spent a long time time passionately and lovingly observing from afar: Afghanistan.