The loneliness of Berlin 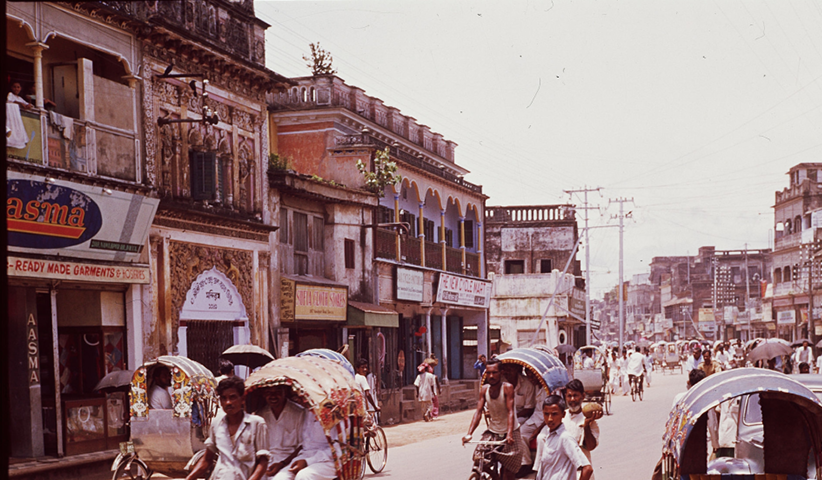 The film maker from Bangladesh tells of his life.

Until I was nine years old I grew up in a village south of Dhaka. I remember the teachers from the primary school days who used to beat us children with a stick on the hand if we were not attentive or if we were disobedient. Later we moved to the old town of Dhaka. There a different world opened up for me, not only because we lived much closer together and with more people, but also because I got to know the Hindu festivals and their colourful wooden and straw figures of gods that could be seen in the streets. I was especially struck by the fact that the relationship between people and gods could be so real, for example, that a god descended to earth and fell in love. My parents are Muslims and in Islam God is neither concrete nor close.

When I was twelve years old I was sent to cadet school, a military boarding school, so far away that I could only come home during holidays. The time I spent there had a strong influence on my youth. My father's wanted me to go to that school. My mother didn't have a say. You had to take an entrance examination and commit yourself to a future military career.

I was full of romantic notions, but disillusionment set in quickly. The school was new and was run by three officers very efficiently. We wore uniforms and followed a regulated daily routine: Breakfast, lessons, exercise, homework supervision. The discipline was difficult for me, but I got used to it, also to the hierarchy that operated among the grades. In the last two years of school I paid more attention to my own interests, opting for subjects like literature and cinema. I read a weekly magazine in which I discovered the "other cinema" that existed parallel to mainstream cinema.

After school I made contact with film activists and poets. One poet became like a brother to me. He was ten years older than me and I could visit him at any time of day or night. For breakfast he read me his latest poem. I went to evening film clubs at the foreign cultural institutes in Dhaka, such as the Goethe Institute and the Alliance Française. In 1987 I enrolled in a course in philosophy at university. At the same time I learned Russian and French. The Russian lessons were free of charge, but bad, and the French lessons were very expensive. Finally someone suggested I go to the German classes, saying they are cheaper and nicer. I received a language scholarship in Berlin. On 1 January 1992 I landed in Tegel. It was dreary, deserted and grey. I quickly got to know the sense of loneliness and individuality that does not exist in Bangladesh, where you often feel that you are part of something bigger. The social coldness here bothered me at first, but I wanted to stay.

I started studying computer science, but it didn't work out. Then I studied art history, until I finally enrolled at the Babelsberg Film and Television Academy to learn camera work. They were more interested in American film than German film, which I found interesting, films by Kluge, Wenders and Fassbinder. Around that time I verged on giving up, but then I experienced the adventure of shooting and editing a film in a team. "Sand and Water" was my graduation film, after that I made a film for ZDF, it was called "The Happiest People in the World".

When I think about where people are happier, I think that life in Bangladesh is more tangible, closer to nature. The Bangladeshis have their feet firmly on the ground. In Berlin there is only asphalt, in the USA there is not even a window open for fresh air. In Bangladesh, people struggle against the challenges of nature but amidst the chaos you feel more like yourself. There you have to tackle with other problems, like a hierarchical society and gender equality.

As told to by Stephanie von Hayek
Translated by Jess Smee

Talking about a revolution (Tomorrow's world)

an interview with Chelsea Winstanley

How a filmmaker seeks to give the Maori a voice.

All out at sea

A t-shirt from Bangladesh, an avocado from Mexico: Without the invention of container ships, today’s consumer habits would be unthinkable.

Out of love for cows

About a special animal in South Sudan.

Talking about a revolution (Tomorrow's world)