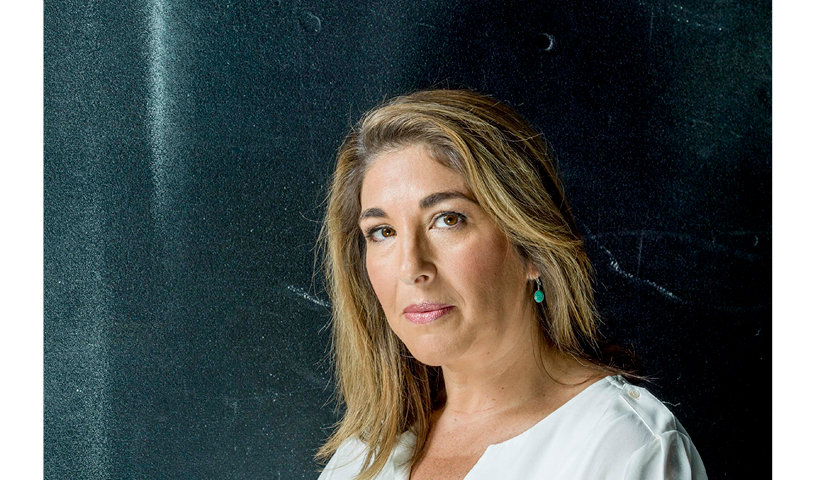 For decades you have been a leading light of the protest movement. You have written about the Iraq war, about globalisation and consumption and more recently climate change. Is there a link between your works? Do they form a certain narrative of resistance?

I do see a narrative and I think it relates to how I wrote No Logo, which came out almost 20 years ago exactly. It was really about a new model of consumption, about what was called “lifestyle brands”. As collective institutions were crumbling, people were deriving their identities through consumption, constructing themselves through shopping. This model of hyper-consumption was globalised to every corner of the planet, not to everyone on the planet but to each and every country on the planet, including China and India. The trade liberalisation that I was writing about in No Logo was about setting up an infrastructure that allowed corporations to be free to seek out the cheapest ways to produce their products around the world. That meant cheap labour, which I wrote a lot about in No Logo, but it also meant cheap dirty energy. And so the success of that particular model and the high pollution associated with that particular production and consumption model is intimately connected with the climate crisis. This is why I don’t think we will have any green future until we actually tackle overconsumption.

Is it harder to get your message of resistance across in our age of political polarisation and disinformation?

I wouldn’t say it’s harder. I’ve been talking for around 15 years about climate change and people were never more aware of the urgency of the problem. You see it in all the polling and in the incredible growth of the Fridays for Future movement. When I started writing about climate change even democrats, who said they cared about climate change, would consistently rank the issue last among all their issues of concern. Now in the US people rank climate change as their number one issue alongside healthcare. That’s a huge shift. So I don’t think we can say it’s harder to get the message across. My book, This Changes Everything, came out in 2014 with the subtitle “capitalism vs the climate”. Then it was treated as an incredibly extreme position to say that there is a conflict between an economic system built on growth and what our planet needs us to do – which is contract our consumption. It’s interesting that when I make that argument in 2019, I don’t encounter anyone with serious arguments on how we can do this with market-based solutions. I have encountered people who say that market-based solutions can be part of it, but there really isn’t an economist on the planet who can tell you how you can get seven to ten percent emissions reductions per year within the context of an economy that is built to pursue economic growth at all costs. What I get is doom, or “why are you so optimistic, why haven’t you given up yet like the rest of us”, so we’ve sort of skipped straight to “it’s impossible” without actually trying to figure out how to do this. We’ve gone from denial to we’re doomed, with nothing in between. I’m just trying to buy us a couple of years of thinking: well, maybe we could try and solve this earnestly and with our eyes open.

Do you see yourself as optimistic?

I’m amazed that I’m described as optimistic! All I say is that there is a very slim chance of us avoiding catastrophic climate change. This is a slim pathway - and I’m not very interested in talking about whether our chances stand at ten percent or eight percent. That this passes for as optimism is more of a commentary on how depressed the culture is than on my own mental health. I am not only optimistic. I sometimes describe myself as a possibilist: as long as there is a possibility, that is what I’m interested in. I see some self-indulgent doomism that’s set in in parts of the cultural world, which assumes a certain level of safety: that people who are indulging in their apocalypticism will be safe as the world burns. Most people on this planet do not have this position of safety. So I think that those of us who are relatively privileged have a responsibility not to indulge our malaise. I am interested in enlarging our chances and in strategising about forming a broader movement that can be more of a counter power against the forces that want things to stay exactly as they are, because they are tremendously profitable for a segment of the population and the economy.

How do you see the future? Can you give us some idea of the utopia that you imagine?

A while ago I was involved in producing in short film called A Message From the Future with Alexandria Ocasio Cortez. I would invite you to have a look at it - it’s our attempt to glimpse a utopian future. It’s the story of how we won the New Green Deal. I talk about the utopian imagination and that I feel that we are so locked in to an apocalyptic imagination, which is in so much of our culture that we’ve lost the possibility of imagining a future that might be better than the present. But really the future that we’re describing isn’t some wild utopia, it’s a future where everyone has the basics taken care of; where we value things like access to the arts and nature. Where we value women’s work and the work of care, which all the research shows produce more wellbeing than endless consumption. Once again, this passes for utopia, but, as we say in the video: we’re going to live with loss. In the video we talk about losing Miami, losing coastal cities, losing amazing species. Utopia left the building, as far as I am concerned. We are living in an age of extinction. What we really are talking about is how we navigate a very difficult future, where the space for humans to live on this planet, where we can live and thrive, is contracting. We will have to live more densely on less land. We need to unlock how we can do this with grace, without turning on each other, without becoming monsters, without rationalising letting people drown in the Mediterranean or in the deserts of Arizona, which is what is happening right now. Is that utopian? I don’t know, but it’s better than what we’re doing right now.

The interview was conducted by Jess Smee

“When photographing, I had to wear protective goggles”

a photo gallery by Natalia Kepesz

Polish photographer Natalia Kepesz travelled to her hometown of Złotoryja in southwestern Poland for her latest works. She also documented a new Polish trend, military summer camps for local children.

About a special animal in New Zealand