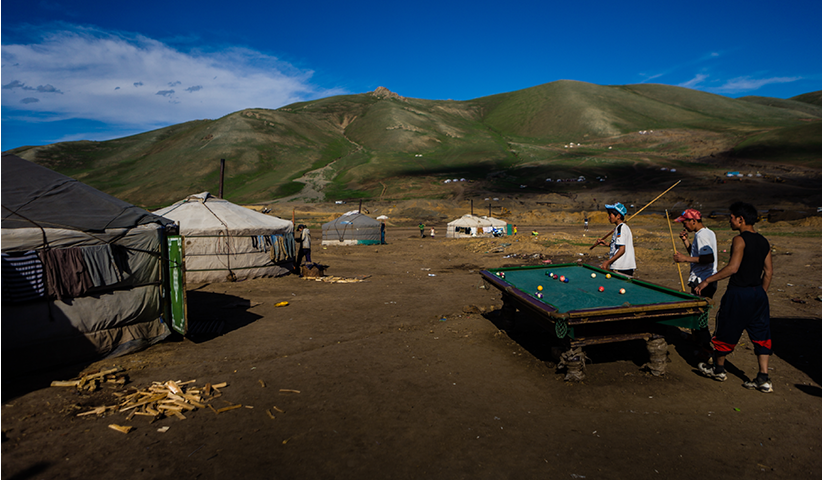 A billiard table in the Mongolian steppe: Images of a gold seekers’ camp. Photo: Timothy Fadek

Far away from the capital Ulaanbaatar, former Mongolian nomads are digging for gold. Photographer Timothy Fadeck zoomed in on their camps.

I first learned about the gold rush in Mongolia from a magazine. The story painted a completely different picture of the country I thought I knew. This poor nation of shepherds and nomads was suddenly supposed to get rich from gold, copper and other minerals? The report lacked images, so I decided to find out for myself what lay behind the story. After arriving in Ulaanbaatar, the capital, I photographed everything that was new and shiny: nightclubs, shopping malls, Louis Vuitton. Then I ventured out to the gold and copper mines, the source of the new wealth, which often lay hundreds of kilometres away.

I had been warned that the gold prospectors in the small illegal gold mines certainly wouldn't want to be photographed. They are called "ninjas" by the Mongolians because they carry the green cups they use to wash out the gold on their backs, reminding people of the "Teenage Mutant Ninja Turtles" from U.S. comics and movies. In fact, many of them used to be nomads and have abandoned their traditional way of life because gold is seen as a way to get rich quick.

I met the prospectors at the pool table about five hours from the capital near Uyanga. they were very friendly and welcomed me once I was open about what I wanted. They were patient: I did not know, for example, that when you enter a yurt you are not allowed to touch the threshold and must move clockwise inside. It was only by reading their faces that I realised I'd done something wrong.

As told to Karola Klatt
Translated by Jess Smee

Make it yourself (Cultural spots)

A celebration site in Iran

About the weddings of the Qashqai nomads in the Fars province.

Earth, how are you doing? (What's different elsewhere)

In Mongolia, going to the hairdresser or booking up an electrician is not something to do off the cuff.

Deep in the mountain’s belly

In the Peruvian city of La Rinconada, known for its altitude and its gold, many come to seek their fortune.

Fruit trees instead of desert