“Some things you have to suppress”

an conversation with Irena Veisaitė 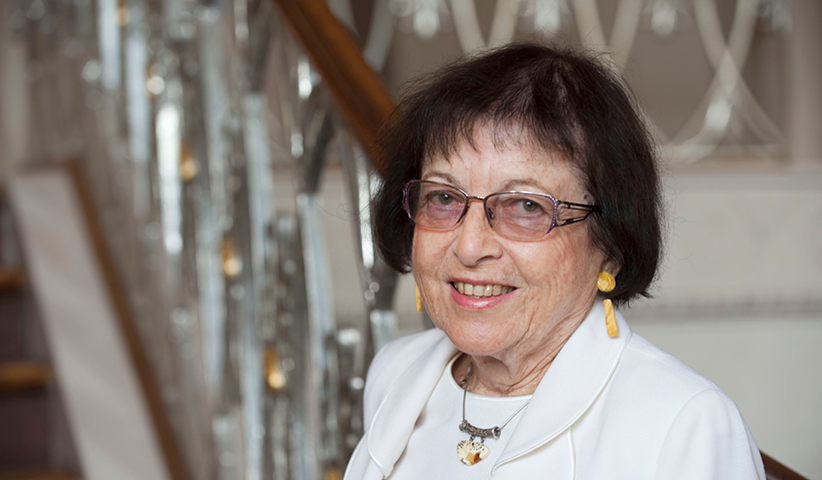 The Lithuanian Irena Veisaitė survived the Kovno ghetto as a teenager.

Mrs. Veisaitė, you were born in 1928 in Kaunas and will soon turn 92. If you dig deep in your memory, do you have an early childhood memory?

Yes, I have many different memories! For example, a stroll with my parents through downtown Kaunas, that must have been in the early 1930s. I walked between them and grabbed my father's hand on one side and my mother's on the other. They had argued shortly before. I remember how much that depressed me, I didn't want them to feel bad. But I also remember very clearly the conversations that the adults had at that time: about Hitler and about how a war would probably be inevitable.

You were barely five years old at the time...

Perhaps a little older, but yes. Even as a small child I was very curious. When relatives came to visit, they'd say, "Irena, you're an old head." It's a Yiddish expression. It means I thought more like an adult than a child. I always wanted to know what my parents said to their friends. I remember that it all scared me very much. I lay in bed and wondered what the word "war" actually meant. I think I owe that old head - or precociousness - to my father.

He never really treated me like a child. One time, I was walking through town with him, looking up at the sky. He didn't warn me about a street light that was in my way. Instead, he said, "If you keep looking at the sky, you're going to hurt yourself." And that's how it happened. Then he took me to the pharmacy to get me a plaster - and I learned my lesson. He brought me up to think for myself. When my parents divorced in 1938 and my father emigrated to Belgium with his new wife, my mother said to her friends, "Irena is now the man in my life." And it was a little bit like that. I made her breakfast, went out to buy bread and sometimes even did the bookkeeping.

Do you think this early independence helped you later? When World War II came to Lithuania in 1941, you were still a teenager?

I'm sure that helped. By 22 June 1941 at the latest, when the Wehrmacht invaded Lithuania, I had no choice but to grow up from one day to the next. Events forced me to. My mother was in hospital at the time because she had had kidney surgery. A few days later, a soldier from the Lithuanian Activist Front, an association of pro-German nationalists, came and arrested her. I was told to leave the hospital, but to bring her clothes. When I came back with the clothes, my mother already knew what would happen. At a moment when the soldiers were not in the room, she brought me to her...

What did she tell you?

She gave me three pieces of advice that I haven't forgotten to this day. She told me to always stay independent, to always live with the truth, because lies have short legs, and never take revenge. I only understood the meaning of these words much later, but I always tried to stick to them as best I could. They are deep inside me.

When you spoke to your mother, did you suspect it might be the last time?

I knew we were all in great danger. I knew Jews were being murdered on the streets of Kaunas. Still, I couldn't imagine that the last time we would see each other would be at that hospital. But there was no time to think. Everything happened much too fast. First I moved in with my aunt and cousin. A short time later the order came for us to move to the ghetto.

In the following two months - between August and October 1941 - the Nazis murdered more than half of the Jews living in the ghetto of Kaunas. At the age of 13, did you understand what was happening?

I understood that we were being killed one by one. The question was when and why. Why were the Jews being killed? Why did they kill my mother? None of us had done anything wrong. But in the ghetto these questions were secondary. In the ghetto it was all about survival. There was only death and how to avoid it one more day. And then one more day and then the next. You just waited for the next humiliation and the next moment that could spell the end.

One of these moments was the Great Action, which took place on October 28 and 29, 1941. All the inhabitants of the ghetto were gathered in the "Square of Democracy" and divided into two groups: those who could work and those who could not. You, too, stood there as German soldiers walked through the ranks and decided on life and death by pointing their fingers ...

I only really remembered it later. Some things you have to suppress, you know? At least for a while, until you can really start to revisit them again. You put on some kind of protective armor to keep yourself alive. But, yes, I was there, and so were my grandparents and an aunt and uncle. I remember putting on my mother's bra and stuffing it with stockings so I looked like a grown woman. I also remember how the Gestapo man walked through the rows, sending some to the right and some to the left. When he came towards me, I looked him straight in the face. I'm still convinced that I hypnotized him with some kind of superhuman strength. Then I heard him say: "That girl has beautiful eyes. To the right!" He didn't see my grandparents and I pulled them to the right side of the square behind me. That's how we survived the day.

So it was a coincidence, pure luck – or fate?

It probably doesn't make any difference if you name it chance or fate. Some things just happen. And then a lot of things happened that couldn't be explained. For instance, there was a time when the Gestapo was looking for young, educated Jews. For archive work, they said. My cousin Waldemar Ginsburg contacted me. He thought such work was easier and cleaner than a craft job. But the Gestapo only took 500 men. Waldemar found himself in 513th place and didn't get the job. Fortunately for him. The next day, 500 men were shot. Even coincidences can be a question of fate. I could have been killed on at least ten different occasions, but it never happened.

In 1943, you escaped from the ghetto. Friends of your father's smuggled you out of Kaunas and brought you to Vilnius. You stayed there until the war ended. Later you went to the Soviet Union to study German literature. How often did you talk about your experiences in Kaunas?

Less often than you might think. I never tell my story unless I'm asked. In the Soviet Union and in post-war Lithuania very few people wanted to talk about the Holocaust. But the time was always on my mind. Especially when I saw history repeating itself. After the war ended, I thought an atrocity like the Holocaust could never happen again. But then millions were killed in the gulags, Vietnam, Pol Pot in Cambodia and the mass murders in Yugoslavia and Rwanda. Now I often think that maybe mankind needs the cruelty and the blood – maybe the evil is in our nature.

You are friends with Reglindi's Rauca. She is the granddaughter of Helmut Rauca, the SS man whom you looked into the eyes of in 1941 on the Platz der Demokratie. How did you find the inner-strength to reconcile?

Reglindis made it easy for me. She is a wonderful person. When she heard about her grandfather's story in 2003, it threw her life off course. She called me because she wanted to confront her family's past. I was impressed. And what was the alternative? To hate her? We became friends over the course of many conversations. I invited her to Vilnius, and she came. There can be only one way forward: apology and forgiveness. I believe that our task is to keep rolling the stone of reconciliation up the mountain. Like Sisyphus. There must be people who want to defy all hatred and who want to understand and forgive each other.

Today you work for the American Soros Foundation, which promotes cultural exchange and democracy. You have a lot of contact with young people. Do you sometimes feel a little jealous of a generation that - at least in Europe - is growing up in a peace that was not granted to you as a child?

On the contrary: I am happy for them. I see many wonderful people growing up in Lithuania. They read books, they travel and get to know the world. Of course, there is still unfounded hatred, but I have the feeling that they are more willing to learn than other generations. Recently a Lithuanian youth group that had been in St. Petersburg visited me. Before that many of the students had had a number of prejudices about "the Russians". But when they first met some people in Saint Petersburg, the stereotypes were swept away. The personal exchange crushed all prejudices. And that's how it usually is. You have to love the good in people and deal with the bad.

The interview was conducted by Kai Schnier

Our chief editor takes a look at the latest edition.

“Guilt is at the heart of being human”

an interview with Bart van Es

Guilt is a recurring theme in world literature. The author Bart van Es on why it still has not lost its current relevance.

in conversation with John Macnicol

Academics put off their retirement, manual workers often retire in their mid-50s. A conversation with the sociologist John Macnicol.

When are migrants integrated?

Apparently never. There are endless demands for integration, one never really becomes part of "us Germans".

The number of elderly people in Taiwan is rising fast. How do they live and what is their role in society? Two projects are searching for new solutions.