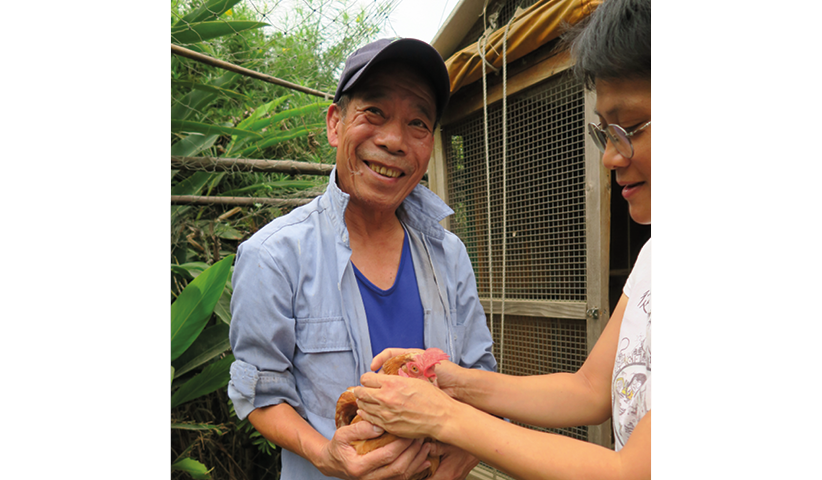 The 65-year-old Jin-Xiang Xu with a hen in a community gardening project in Kaohsiung. Photo: Gundula Haage

The number of elderly people in Taiwan is rising fast. How do they live and what is their role in society? Two projects are searching for new solutions.

Steve Liu’s father vanished from his home in southern Tiawan in Febuary 2016. "It was just before he retired," said Liu, 40, who works in marketing in the capital Taipeh. "My father had a lot of time, no money issues, he was healthy. I thought he enjoyed retirement – but all of a sudden, he was gone. The only thing that he left behind were three letters, to my mother, my brother and me, telling us not to look for him,” Steve Liu was at a loss. What prompted his father, who had been a successful businessman, to move away as soon as his working life ended?

In Taiwan, men retire on average when they are 62.3, women at 59.7. Life expectancy is 80.4 years. So many older people still have many active years ahead of them when they retire. "Most of them long for a task, for meaning, " explains Yu-Juin Wang. The cultural critic has been looking at demographic change in Taiwan for several years. "In the past, extended families lived together and the elderly looked after their grandchildren. But these typical Chinese family structures no longer function. Now, many of those of working age work abroad or in the big cities, while the elderly are left behind."

But now, with his own father before his eyes, he suddenly noticed old people who looked unhappy everywhere.

After a week of uncertainty, Steve Liu's father returned home. He had spent time in a residential complex for well-heeled senior citizens to escape the arguments with his wife and the domestic emptiness. After his "brief adventure", as he called it, he was ready to face retirement. But the subject of aging continued to bug his son. Liu says he had not had a particularly close relationship with his parents. Elderly people’s worries had never bothered him before. But now, with his own father before his eyes, he suddenly noticed old people who looked unhappy everywhere. Having long worked for major technology companies such as Samsung and Sony, he is a believer in the networking potential of digital technology. "Many older people live in the analogue world. ...but most of life today is online. If you're not familiar with it, you're left out." In August 2016, he and two friends founded the group Fun Aging, with aim of ushering older people into the digital age.

On a Friday afternoon in November 2019, some thirty senior citizens are sitting in a small shop in Dadaocheng, one of the oldest districts of Taipei. All of them are concentrated, curled over their smartphones. Guei-e Yang squints her eyes together while she focuses her camera on an orange in front of her. Click - the picture is in the box. Now she just has to use the Foodie app to get the best out of the photo. This is the fifth time that the 72-year-old has come for a smartphone training session from Fun Aging. "Every time I come here I learn something new. How to use Insta-Messenger or how orient yourself with Google Maps." She had been looking forward to editing. "My friends always upload pictures of food to our chat group. With what I learn here, I'll soon be able to keep up with them," Yang says happily. She has had much more contact with her granddaughters, aged 10 and 17 years old, since she started using Line, a popular messenger service in Taiwan.

Organizations such as Fun Aging have struck a nerve in Taiwan, one of the fastest aging societies in the world. Already 15 percent of the population is over 65 and from 2025 it will be every fifth person. At the same time, the country had the lowest birth rate in the world last year, and since 2015 the proportion of the working population has been falling. "The problem is that demographic change is happening so quickly," says age expert Yu-Juin Wang. "In other ageing societies such as Germany or Japan, this development took place over forty to fifty years. In Taiwan, we only have just under ten years to prepare for the social changes."

And the challenges are numerous: Only those who have earned very well before can live on their pension. So many care workers are needed that the demand is only met by migrant workers from neighbouring countries like Indonesia. "If we don't all pitch in and find new forms of living together, we are heading for a demographic catastrophe," Wang says.

On a small farm in the southern Taiwanese city of Kaohsiung, 65-year-old Jin-Xiang Xu vigorously pulls a tuft of weeds from the loose earth. Rip, rip, rip - with a persistent grip he uproots three plants that sprout in between chili plants, lettuce and beetroot. He nods contentedly. "The chickens have already eaten most of the Work. Everything grows well here. After all, we only use chicken manure." Twice a day he comes to the garden project developed by animal rights activist Huan Ching Yang. Since 2012, she has been campaigning for species-appropriate chicken farming and sustainable agriculture in Taiwan, combined with an idea of how to involve the elderly. "As my own parents got older, I realized that getting older people interested in sustainable animal husbandry means tapping into an incredible resource," she says. With her organization Hen and Traveller, Yang is building urban garden projects where senior citizens can keep chickens, cultivate permaculture and supplement their income by selling eggs and organic vegetables.

That's why Jin-Xiang Xu is here. He feeds the nine hens, takes care of the seedbeds and enjoys a stint far away from the hectic city life. "Since I joined the project, I feel great. With all the fresh air and exercise, I'll probably live to be a hundred," says Xu, who is tanned, has deep laugh lines around his eyes and a broad grin. Project founder Huan Ching Yang puts this effect down to “the power of the hens”. He added: "Their eggs keep you healthy, but they're also great pets to keep old people company".

The hens greet Xu with a clucking sound as he lets the weeds and grains fall into their food bowls. Carefully, he lifts one of them out of the enclosure “I like chickens. They have a character all their own," he says, pressing the hen against him.Whether with a hen or a smartphone, a fulfilled life in old age needs to be active and offer the sense of being part of a community - no matter whether this is done in a messenger chat or via collective gardening work. If everything that made life worth living disappears when you retire, the sudden emptiness is hard to bear.

These days Steve Liu's father laughs at his escape from retirement. But his son hasn't forgotten: "Through Fun Aging, I have met many older people. Now I understand how he felt back then," he says thoughtfully. "He was a businessman, always busy and just didn't know how to deal with not being important anymore." The relationship between the two has improved since then. But Liu's father still hasn't turned up at his son's classes.

My great-grandmother in an oxygen tent, my wild grandfather, our neighbour Miss Dickie: Revisiting the old people of my life.

About a special animal in Northern Iraq

in conversation with John Macnicol

Academics put off their retirement, manual workers often retire in their mid-50s. A conversation with the sociologist John Macnicol.

The Centenarians of Ikaria

How people age is determined by their genes and by their living conditions. Andrea Frazzetta has photographed centenarians on the Greek island of Ikaria, where a surprisingly large number of people grow very old.