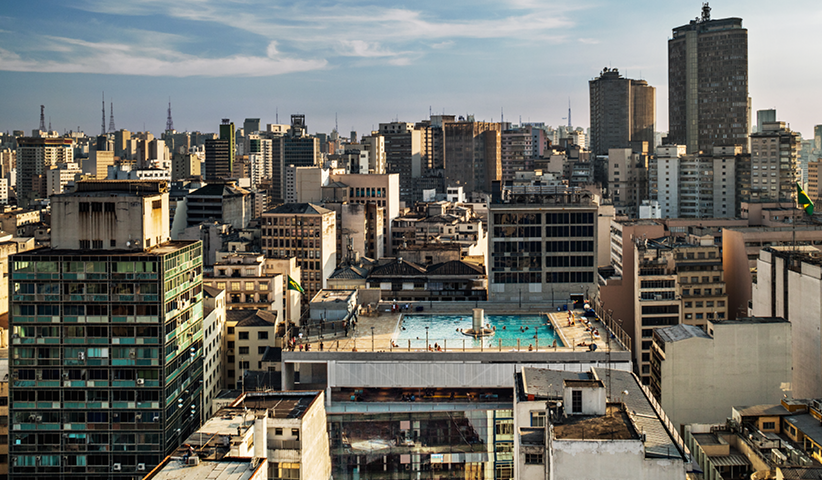 São Paulo has a new cultural and leisure centre: the Sesc 24 de Maio. Most surprising about the building is its swimming pool, which covers most of its roof. It is supported by four columns in the former atrium, which stand separate from the rest of the building. Vistors can relax here and take in the view across the old town of São Paulo.

The building was once the headquarters of a furniture department store. At first glance, the corner building did not seem particularly suitable to house cultural activities but the architect Paulo Mendes da Rocha and MMBB Arquitetos did not demolish it. Instead they renovated the existing building. Today, it has twelve floors, which are accessible via ramps. They contain a library, a restaurant, sports fields, exhibition rooms, theatres, studios for education and even dental practices. The two street-facing facades facing are covered with a skin of reflective glass.

This makes the building almost disappear, it becomes a huge mirror, reflecting its neighbourhood. From inside, you get a sweeping sense of its surroundings. It is quite common for us architectural photographers to try to isolate a building to highlight its inherent features. But, on the contrary, this building’s focus is its strong relationship with the long-established city and the unusual beauty of this swimming pool surrounded by old buildings in downtown São Paulo.

Someone else's paradise (A phone call with ...)

Yes – bank holidays set us free from the day to day.