Where is it all coming from? 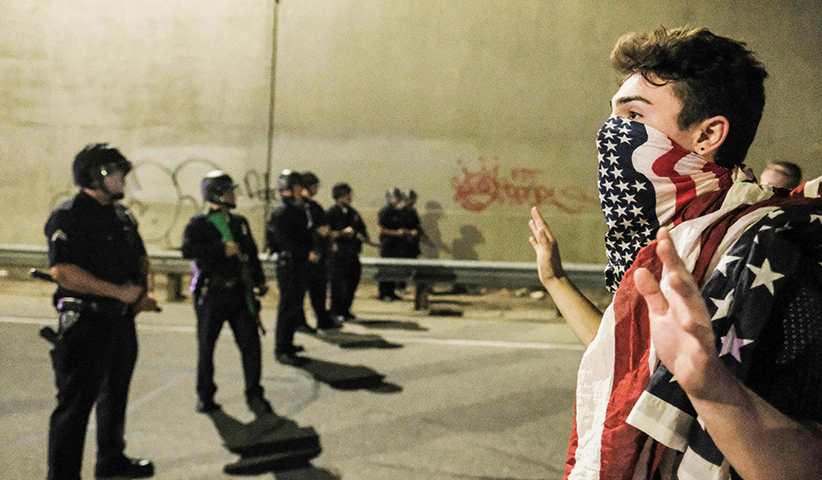 In her brilliant history, Jill Lepore unravels the contradictions of her country.

Is the West one single block? The idea that USA is completely different from Europe has become deeply entrenched in the three years since Donald Trump became the 45th American President. But there are strong signals suggesting that the trend of difference stretches further back: a violent society which can’t get to grips with its private gun ownership, a deeply religious culture, whose fundamentalism irritates the rational secular Europeans, black men in prisons and a consumerist lifestyle that makes the old continent look almost ascetic. Where does that all come from? Until recently West European allies resembled mini versions of the big brother on the other side of the Atlantic. But who in Europe, especially in Germany, would want to follow in the USA’s footsteps today?

And it is not just foreign commentators who are asking these questions. America itself has become insecure: Where is it all coming from? What are the roots of Donald Trump, fake news, the hatred towards women and minorities and the crude nationalism of “America First”? The gaze falls on history and it is becoming increasingly clear that the traditional narratives don’t help us much. The 400 years which have passed since the foundation of the first British colonies on the mainland are often described as the nation’s pathway to freedom. There is a conservative version of the story which suggests that freedom was always there, at the very latest with the independence of 1776 and the federal constitution of 1787. And there is a progressive version, which moots that freedom and rights came about through a painstaking struggle, in particular for those who were long oppressed, including women, the indigenous population and, above all, the forced migrants from Africa, the slaves and their descendants. But even this critical narrative, despite its inclusion of bitter setbacks, had an optimistic slant. America is known as being poised to take on every challenge, it is the "resilient nation". But these days you can't be so sure about that either. America’s special way, the "exceptionalism" of a nation chosen by God, has lost its power of persuasion. In Donald Trump’s America the only remnants of this special role are, to quote Marx, as tragedy or farce.

So it is high time for a fresh take on American history, one that no longer veers from progress to freedom but probes the roots of current crises and contradictions. Who would dare take on such a task, if not Jill Lepore. Almost unknown in Germany so far, the 53-year-old Harvard professor has long been an academic and intellectual star in her own country. She was first reputed for her books on the colonial history of the 17th and 18th centuries, above all with a fascinating and subtle telling of "King Philip's War", a bloody conflict between New England settlers and Indians 350 years ago. Many other books followed and Lepore increasingly ventured into current political terrain. However, she does not neatly separate genres, rather historical material, topical comments, scholarly presentation, lively political essay are weaved together in a rare way. Take her book "Tea Party" published in 2010: It spanned the Boston event of 1773 and the conservative movement named after it, which emerged at the beginning of the 21st century. Do you remember Sarah Palin?

Current politics are endowed with depth as she superimposes the past on to the present. That is also Laepore’s niche as illustrated by her numerous essays published in the renowned New Yorker magazine. She is a gifted writer with an evocative style. So it hardly a surprise that she took a deep breath and explored the big sweep of American history. Entitled "These Truths", it was published last year in the USA and this year in German. It was expertly translated by Werner Roller who captures the tone of the original and makes reading the thousand-page tome an educational pleasure. Jill Lepore's "These Truths" is the most exciting and in-depth book, authoritative and elegant, in short, it is the best history of the USA that exists at the moment – an American history to cater for the new questions emerging at the beginning of the 21st century.

"These truths" is a quotation from Thomas Jefferson's declaration of independence. That stated that it should be holy and irrefutable that all people - or only men? – to have natural rights and that democratic governments should secure equality and rights. But were these “truths” valid at all, and for whom? Jefferson referred to the "sacred" truths; Benjamin Franklin, with his scientific mind, made them "self-evident" in the final version of the document that we continue to quote today. For Jill Lepore, this gap in terminology reveals a fundamental conflict in American history: reason pitted against religion, science against faith, and this clash becomes the leitmotif for her historical journey, which starts with Columbus in 1492. Isn't that Eurocentric? Actually no: it accentuates the conflict which first emerged with the collision of indigenous peoples and European settlers. This was then expanded and aggravated with the import of African slaves. Lepore’s history of the USA doesn’t chronicle a big democratic community which gradually incorporated more and more people. Rather she sees America as a deeply divided nation, a society with deep fissures which were hardly possible to bridge.

What does progressing towards freedom actually mean? The revolution failed to abolish slavery; the constitution of 1787 invented the odd rule that three fifths of African slaves in the southern states were counted in the democratic representation to benefit the whites, so that the southern states received more delegates. Slavery and democracy, the freedom of some and the absence of freedom of others - these were intertwined from the very start. The civil war abolished slavery - and Jill Lepore identifies himself as a fan of Abraham Lincoln. But segregation, the American apartheid of the "Jim Crow" system, which enshrined racial division in law, only began afterwards, as did the bestial violence of lynching. When was there an "untroubled" phase in the supposedly brilliant history of this country? Even when racial segregation gradually disappeared under the pressure of the civil rights movement, the "color line" retained its significance. And new divisions opened up in the second half of the 20th century, not least between the conservative-religious society of the interior and the small towns on the one hand and the liberal-secular coastal metropolises on the other. This is the immediate prehistory of the political events of 8 November 2016, the election of Donald Trump.

In some respects, Jill Lepore's US history is quite conventional. She follows a chronological structure, concentrating on political history and not omitting a single presidential election. Divided into four parts, each with four chapters, she works her way up from Christopher Columbus to Donald Trump - and the book actually ends with a kind of election report, a dive into the inner workings of media and politics in the autumn of 2016. The history of politics in the media and communication is another of her book’s narrative threads. It includes, for example, a detailed probe into of the origins of opinion research, the demoscopic survey of the people and their issues. And readers have no reason to fear that the important things, the classical themes, the big events and the famous names won't crop up here.

But then something surprising flashes up again, an accent or a detail one was not expecting: a name and a life story beyond the great white men. Jill Lepore doesn't introduce current events with a sledgehammer, but rather they can be read between the lines, with a bit of imagination. For example, when she explains the strange structure of the "electoral college" that actually elects the president. Or when she describes Theodore Roosevelt's election, 104 years before Trump's, saying that the candidate had become more important than the party he stood for. Throughout the history of the 20th century, the author tracks repeated failed attempts to create general health insurance, long before those of Hillary Clinton and Barack Obama.

For Jill Lepore, all this is no reason to turn to despair. Her American story is free of melancholy or nostalgia. Certainly, she doesn't twist the tale by recasting a now unconvincing tale of progress as a tale of decay. Instead "These truths" are neither celebrated nor exposed as lies and deception. They are a yardstick, and above all they continue to spark conflicts that will not culminate when Trump's rule ends.  Jill Lepore's history of the USA is an archaeology of the country's current problems, but it cannot be pinned down. And this is precisely what makes her reading of American history so exciting and liberating.