The tanneries of Marrakech 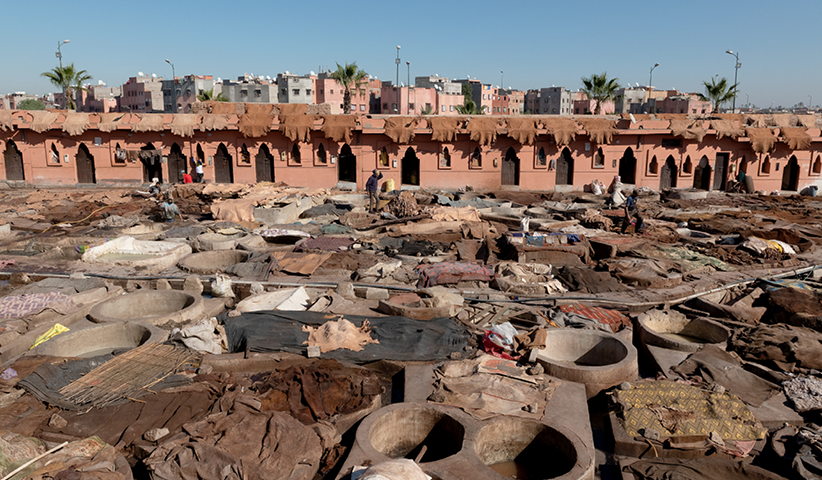 View of tanning pools in the Old Town of Marrakesh. Photo: Ali Ghandtschi

Those who get lost in the east of the old town of Marrakesh will find themselves in the quarter of the tanners. As a visitor to the city, you feel safe, but the offers for a guided tour or an invitation to a leather goods store become increasingly aggressive.

Arriving in a tannery I walk upstairs. From a small, dirty balcony, the picture is chaotic: skins are lying out to dry and men stand knee-deep and without gloves in basins filled with unhealthy looking liquids to work on the leather. Five of these basins belong to each family. Arab families work five days a week, Berber families only three because they spend the rest of their time in the mountains. The tanners are at the bottom of the hierarchy of craftsmen. Legend has it that they are descended from demons. Their king condemned them to this profession because they defied his rules. The tanneries, which were traditionally on the outskirts of the cities because of the stench, are now surrounded by houses. They are surrounded by a poor settlement with dilapidated houses and unpaved streets behind the city wall. Only a little further north lie the gated communities with expensive apartments, mosques, palm trees, pools and cafés. Unauthorized people are not allowed into these neighborhoods. But the stench of the tanneries cannot be stopped by the high gates and walls.

A house in Bnei Brak

This house, in Rabbi Akiva Street, stands in the ultra-orthodox town of Bnei Brak, north-east of Tel Aviv. Rabbi Mendel Tobias lives with his wife in its four r...