an essay by Joanne Hichens

The past decade witnessed a boom of online platforms showcasing African creativity. This fast-growing online culture has resulted in a wealth of new zines offering a space for contemporary African writers to share their work with an audience keen to revel in fresh ideas, images and stories.

The sheer number of sites is testimony to the countless stories and ideologies emanating from Africa, and to the engagement of cutting-edge African creatives, writers and artists offering work which transcends the traditional. The proliferation of compelling online African literary magazines raises the question: are online zines the new home of African literature?

Ben Williams, publisher of “The Johannesburg Review of Books”, observes: “Just the other day, we learned of ‘Ta Adesa’, an online literary magazine sprouting from a base in Ghana, and there are interesting crossover arts and culture zines like the Africa Open Institute’s ’herri‘. New media outlets such as ‘New Frame’ and ‘Africa Is A Country’ have also revived in-depth literary journalism.”

Ben Williams, publisher of “The Johannesburg Review of Books”, observes: “Just the other day, we learned of ‘Ta Adesa’, an online literary magazine sprouting from a base in Ghana, and there are interesting crossover arts and culture zines like the Africa Open Institute’s ‘herri’. New media outlets such as ‘New Frame’ and ‘Africa is a Country’ have also revived in-depth literary journalism.”

Showing how widely-read online content can be, as well as how global its reach, Aryan Kaganof, editor of “herri”, notes; “The first six issues of herri have received over a quarter of a million page views. It’s exciting to know that there really is an audience for our sound-mine of narratives, ambiguities and ideas which try to answer the question: What does de-colonisation sound like in an age of techno hybridity? We reach a global audience instantly and publish niche writing which the print gatekeepers may not endorse. If you print, you have to sell either copies or advertising. Both come with in-built limitations.”

Interest in the rich literary culture of Africa is hardly a new phenomenon. By the late 1960s, almost 80 British publishers were represented in Kenya alone. The desire may have been to exploit Africa as an untapped market, but submitted manuscripts were inevitably forwarded to London and elsewhere for vetting. Perhaps the best known example of the early African publishing boom was Heinemann’s African Writers Series, marketed as a series “by Africans for Africans” with Chinua Achebe as the founding editorial advisor. Although the material was published in London, up to 80 percent of book sales were in African markets. Some 270 titles were published between 1962 and 1984, including novels by Nobel Prize Winners Naguib Mahfouz of Egypt, Wole Soyinka of Nigeria and Nadine Gordimer of South Africa.

One can hope that the intention of a ground-breaking publisher of African writing was that it would be read predominantly by Africans — but with the closure of the Nigerian foreign exchange in 1982, imports into the increasingly troubled African economies of the 1980s collapsed.

“African literature has, in the past, breathed with one lung, having to present itself by colonial languages and sensibilities”

Although the books originally published as part of the African Writers Series remained under sub-license from foreign publishers and were reprinted under local imprints (in addition to their enduring international audience), they became less accessible in Africa. Generally, when the sales of any African literature is predominantly outside of Africa, one could say a sense of “home”, a sense of African ownership is diminished.

For many, the demise of the series was a clear sign that African literature should no longer be dependent on decisions made in Western publishing capitals and that a new way should be forged. Or as author Mpush Ntabeni puts it: “African literature has, in the past, breathed with one lung, having to present itself by colonial languages and sensibilities”. Publishers across Africa began to focus on African writing, which not only reflected the lived African experience but was also disseminated more easily to residents.

Indigenous publishing is now the norm. The Cassava Republic Press, established in Nigeria in 2006 focuses on developing local talent, and publishing African writers all too often celebrated only in Europe and America. They have recently published Yewande Omotoso’s “An Unusual Grief” and Pumla Dineo Gqola’s “Female Fear Factory”, both of whom are acclaimed writers at home and abroad.

In South Africa, small presses such as Modjaji Books and Jacana Media have published a smorgasbord of African literature, while Karavan Press snapped up Karen Jenning’s “An Island,” which had been rejected by larger publishing houses across the world but was later longlisted for the British Booker Prize 2021.

At times, the tide has even been reversed: over the last 30 years, the African Books Collective (ABC) has distributed African-published books across the continent but also to a wider, international, audience.

When it comes to print magazines, a number of stellar South African publications have made their mark on the literary world in recent decades. Botsotso, Prufrock, New Contrast, Stanzas, to name but a few, all emanate from small presses. Nick Mulgrew, editor of Prufrock, stresses that a literary culture is not just about writing, but also design, visual art, and commerce. “While all things are ephemeral, print publications are less so. They’re tactile, sensory. Print matter is a marker of time and place, in a manner that will be very difficult for digital media to replicate.”

This text is part of a cooperation with the African Book Festival to be held in Berlin from 26-28 August 2022. Curated by South African writer and filmmaker Lidudumalingani, the event will have a particular focus on Southern African literature. MORE

For Lidudumalingani, the South African curator of the African Book Festival 2022, both print and online magazines have a place: “Personally, I like print more. I seem to read print with more ease and less distraction, and with a unique pleasure. It seems to be important to me, to touch the paper, to page through a book … Theoretically, online and print aren’t’t very different. At least they shouldn’t influence the writing. Stories published in print or online should be equally good and equally literary.”

Kenyan-based James Murua, founder of James Murua’s Literature Blog, doesn’t believe it’s about which is more popular, print or online: “The new work is increasingly targeted towards African readers living on the continent. Publishers in Lagos, Cairo, and Johannesburg are producing work that portrays the lives of the African. Writers such as Jennifer Nansubuga Makumbi, Angela Makholwa, and Ayobami Adebayo are perfect examples.”

“The emergent journals are less restrained by the demands of funders… They are able to be more progressive, more radical, more expansive, more subversive”

What is clear is that leveraging digital technology opens up a near limitless space and opportunity for African writers and their readers. In the absence of Western normative agendas, African zines are more likely to push boundaries - compelling photo essays, avant-garde art, experimental prose and poetry - the kind of challenging, titillating, even controversial content that might not be featured in print forms.

In an article for the New York Times, Abdi Latif Dahir quotes the Ghanaian writer Nii Ayikwei Parkes saying that the emergent journals are less restrained by the demands of funders or “by the burden - real or imagined - of having to shape a post-independence identity for Africa that [is] couched in respectability. Because of that they are able to be more progressive, more radical, more expansive, more subversive.”

The literature zine as a business model?

The flip side of the coin is that online initiatives come with their own set of problems. “Few digital magazines achieve the reach necessary for long-term sustainability,” notes Ben Williams. “Online publishing has grown significantly more complex in the last five years. It’s harder to get away with setting up shop using only a basic configuration, like WordPress installed on an AWS server. There are new solutions in digital publishing which are slicker than those which sparked the online revolution but they’re also more costly – and keeping costs low is a key reason to publish online in the first place.”

James Murua agrees: “As it’s difficult to monetise these publications, many rarely see their fifth year.” Although his blog has over 17,000 subscribers and has been successful for over a decade, he’s branched out; “I now look not just to Africans on the continent but Africans all over the world – the diaspora in Europe, the Americas, and everywhere in between. I also have a YouTube channel and a podcast, all with the same mission: to show the African writer at their finest and to shine a light on the high quality, low visibility writers the world needs to know about.”

The development of African literature depends on an active community of writers and readers, but ultimately, governments need to support a reading culture. Without funding and a well-functioning system of programmes and grants, stellar literary initiatives cannot be sustained. A world-wide readership is, of course, facilitated by translations.

Closer to home, the complexities of distribution and dissemination in Africa are often ignored. As Lidudumalingani rightly points out: “Accessibility often only refers to the digitally connected world, as if that is synonymous with the reading world, which it is not.”

The fact that parts of the continent still struggle for access of any kind to literature should not be ignored. There are areas with few options for traditional publishing; where a variety of books and magazines are difficult to source, and where people have little money for printed material. In these cases, the online world can certainly open doors. Yet even as online content proliferates, readers remain hungry for printed matter, including journals and niche magazines.

“In some areas, a variety of books and magazines are difficult to source, and people have little money for printed material”

As both the digital world, and the literary ecosystem of Africa grow and expand, different means of publication will co-exist, serving the varying needs, preferences and desires of the African population. The true “home” of African literature resides in whatever format an African writer publishes.

White lies and the voids of history 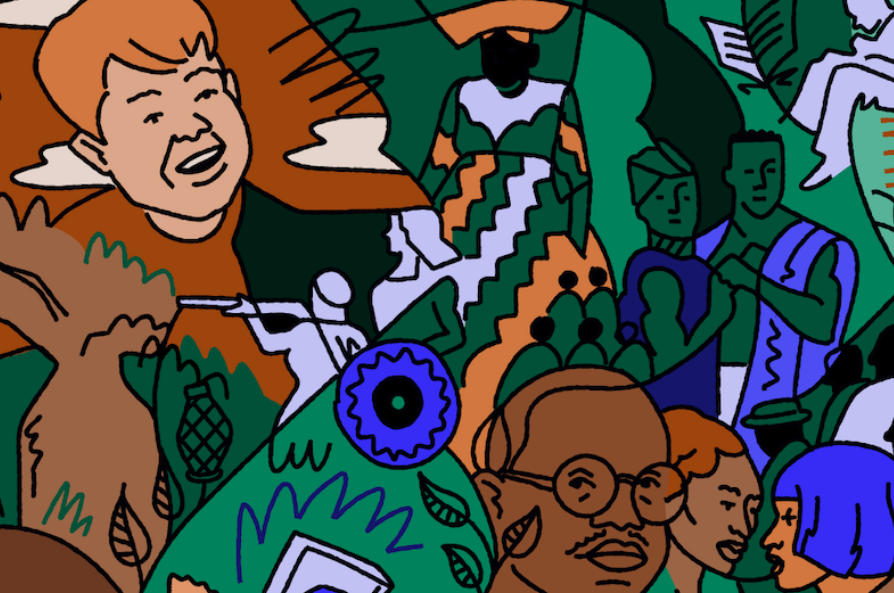 Both Namibia and South Africa look back on a violent colonial past, but the history books only tell of individual “heroes”. Can historical fiction fill the voids and give the victims a voice?

A novel from South Africa 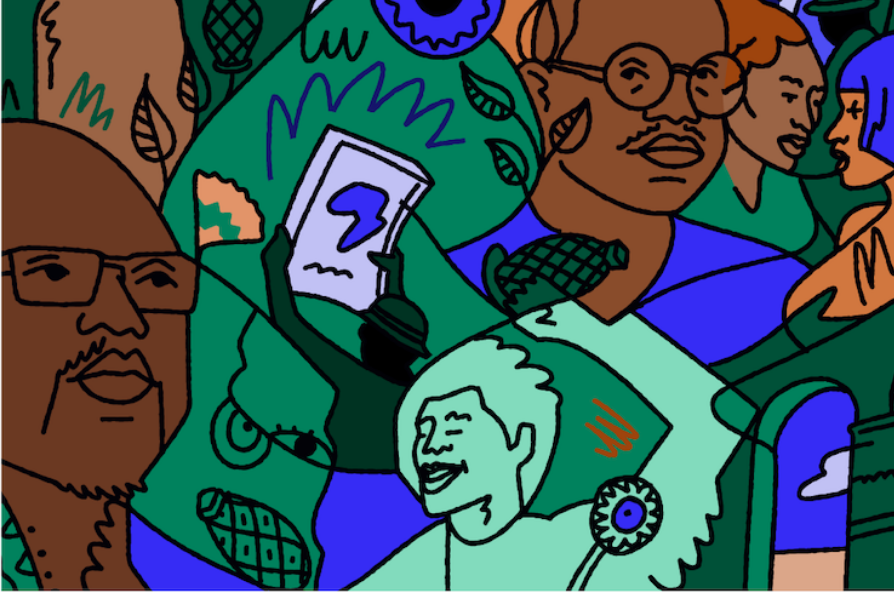 South African literature slipped from the international gaze after the end of apartheid. Books by black authors in particular rarely reached foreign readers. Now festivals, small publishers and the film industry are finally changing the picture 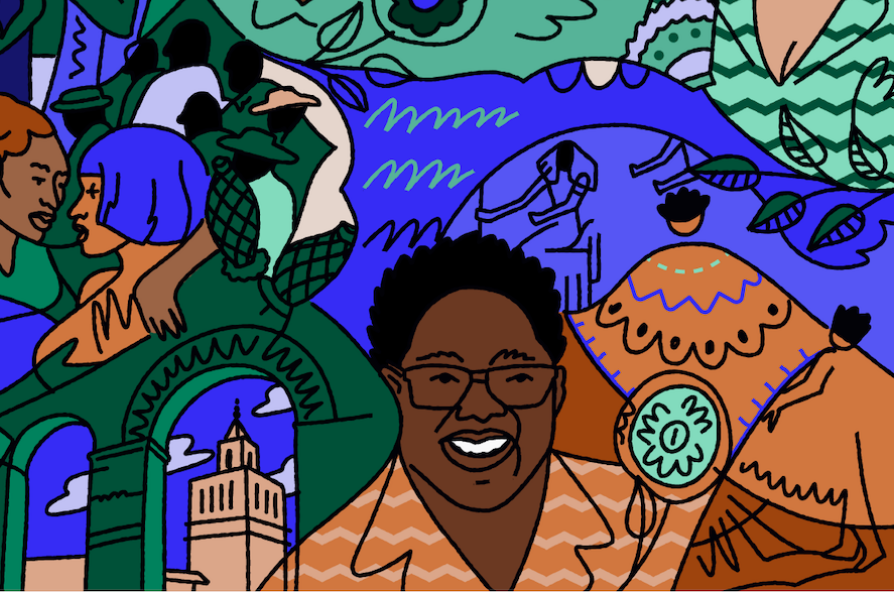 What do you learn when you travel? And why should you set out at all? South African writer Lerato Mogoatlhe has traveled to thirty countries on her continent in fourteen years – and learned a lot about herself in the process